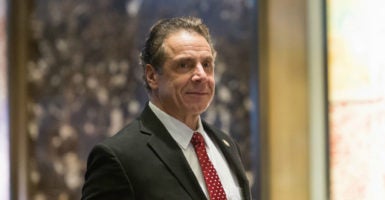 On Friday, New York decided to become the first state to offer four years of tuition-free public college to its residents.

Starting in the fall of 2017, any student from a family who is making less than $100,000 annually can qualify for free tuition, under certain conditions, such as a requirement to maintain a minimum grade point average and commit to living and working in New York for four years after graduation.

Like all tuition-free proposals, this policy kicks the can down the road, leaving taxpayers and future generations with the bill.

Providing students four years of tuition-free college does not mean that professors have generously decided to forgo their salaries and academic buildings now come rent-free. In fact, it does not even mean that universities have a plan to cut administrative bloat to focus more of their efforts on academics.

Indeed, offering free college to students means that someone else is now paying for it: New York taxpayers, many of whom do not hold bachelor’s degrees themselves and will likely earn less in the future than their college-going counterparts for whom they are now footing the bill.

Recent history has shown that removing any financial responsibility from the student to pay for their degree does more harm than good. Economists have found that virtually unrestricted access to federal student aid encourages colleges and universities to raise their tuition prices.

When universities are not directly accountable for their prices to consumers, tuition can gradually increase without jeopardizing the loss of significant numbers of students. However, American taxpayers feel this tuition increase quite a bit when students default on their loans.

The proposed budget plan for New York couples the state taxpayer-funded grants with federal Pell Grants, which has been shown to increase tuition as much as 40 cents on the dollar.

Creating a state grant for higher education, coupled with federal grants, will likely lead to further increases in the cost of higher education. The program is slated to be phased in over three years and is expected to cost taxpayers $163 million in the first year.

Overall, New York’s tuition-free plan puts taxpayers on the hook for college costs that will only go up. Setting this plan in motion with nothing in place to put downward pressure on costs is fiscally irresponsible.

Furthermore, New York’s plan feeds the narrative that no matter who you are or what career you want to pursue, a four-year bachelor’s degree is the only way to achieve your goals.

For many students, spending four years at a university, often studying material that does nothing to contribute to their future earnings, is not the best option.

Instead, policymakers should look toward innovating and diversifying the higher education sector and offering more options to students who may want to streamline their degree toward a specific skill set.

Repealing Obama-era regulations that limit the ability of for-profit technical schools to operate would be a great first step in achieving that goal.

Policymakers are right to want to offer students relief from high college costs. However, offering free tuition ignores true drivers of tuition inflation, and in fact exacerbates them.

If we truly want to make college more affordable and accessible for all Americans, policies should be geared toward limiting federal involvement in higher education and repealing regulations that stifle new and innovative ways of teaching students.

Note: This article has been updated to clarify the cost of New York’s new program in the first year.