The Coast Guard Is Seizing Record Amounts of Drugs. Why More Funding Is Needed for the Fight. 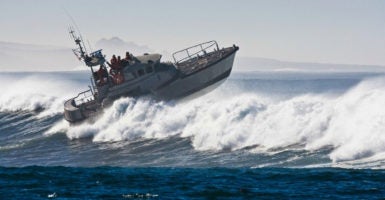 Evan Maguire is a member of the Young Leaders Program at The Heritage Foundation.

After a record-breaking year for drug interdictions in 2016, the Coast Guard is continuing to make significant strides in countering the illegal drug trade in 2017.

On Feb. 16, U.S. Coast Guard Cutter Joseph Napier, assisted by the coast guards of Trinidad and Tobago, seized 4.2 tons of cocaine with an estimated value of $125 million from a fishing boat off the coast of Suriname.

This is the largest single seizure of cocaine by the Coast Guard in nearly 20 years.

The Joint Interagency Task Force South is one of the primary international cooperative efforts in the global fight against drug trafficking. In addition to the U.S. Coast Guard, the task force operations receive support from 14 Latin American and European countries, all the U.S. military service branches, along with many other federal agencies.

In the last 25 years, the task force’s efforts have led to the arrest of over 4,600 traffickers, the capture of over 1,100 vessels, and deprived drug cartels of hundreds of billions of dollars in profits.

Recent increases in interdiction rates can partially be attributed to better intelligence gathering and sharing on drug trafficking, which have allowed Coast Guard vessels to position themselves in the right place and at the right time.

However, cocaine production is also on the rise, suggesting a corresponding increase in the quantity of shipments. While the Coast Guard is interdicting a larger number of shipments, its interdiction rate relative to the growth in cocaine trafficking is another matter.

The Coast Guard has been interdicting a smaller percentage of the total cocaine trafficked than it was previously, down to 11.5 percent in 2015 from a previous high of 15.3 percent in 2013.

Despite the Coast Guard’s increased interdictions in recent years, the size of its fleet and extent of its resources remain insufficient to meet the even higher rate of cocaine shipments.

Commandant of the Coast Guard Paul Zukunft stated that while the Coast Guard has “80 percent awareness” of all illegal operations, “we can only act on about 20 percent of that because of the resource constraints we have. We’re giving 60 percent of what we know, literally, a free pass.”

Programs such as the Offshore Patrol Cutter and unmanned aerial vehicle programs would be wise investments in the fight against drug trafficking.

The Coast Guard, in cooperation with other federal agencies and international partners, plays a critical role in mitigating the flow of illegal drugs from Latin America to the United States.

American leadership in both the White House and Congress should ensure the Coast Guard and other entities receive the resources they need to meet the growing demands of maritime security, while also facilitating strong relationships that mutually benefit the security of the U.S. and its partner nations.