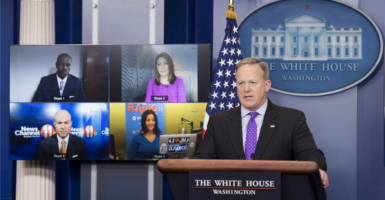 From the moment he took office in January, President Donald Trump put the establishment media on notice.

Through his tweets and press conferences, Trump isn’t shy about calling out news organizations by name or leveling criticism.

And in the White House press briefing room, the Trump administration is changing the dynamic in a way that gives reporters outside the Beltway unprecedented access.

Journalists, commentators, and bloggers who don’t reside in Washington, D.C., now have the ability to ask White House press secretary Sean Spicer questions during his daily briefings via Skype, a video chat service that displays on the monitors behind Spicer’s lectern.

The James S. Brady Press Briefing Room—a place that was once reserved for Washington insiders—is now more accessible than ever under Trump.

The change was among Spicer’s first actions as press secretary. He announced the addition of the “Skype seats” in January.

“This will open up the briefing to journalists who live beyond 50 miles of the Washington, D.C., area and to organizations that don’t currently have a hard pass,” Spicer explained.

But this doesn’t sit well with everyone in Washington.

CNN’s Brian Stelter warned that Skype questions “could be a way to stack the room with pro-Trump media outlets.”

Skypeophant (n.) – super-friendly questioner used to burn up briefing time through the magic of early-aughts technology

According to Bryan Crabtree, an Atlanta radio host and one of those Skype questioners, Americans don’t feel represented by the reporters who are currently sitting in the White House briefing room.

“They feel like that media is in another elite establishment,” Crabtree told The Daily Signal. “I don’t think this is to reject the elite media; this is to add a component, which certainly makes them feel very threatened, but connects this press briefing room to the communities across America.”

Kim Kalunian of Rhode Island’s WPRI—the first Skype reporter to ask a question—told The Daily Signal the White House is offering “Skype seats” not only to create a more diverse press pool, but also to get a glance of what’s happening to Americans outside of Washington, D.C.

“There have been instances where people comment that a Skype reporter asks questions that are outside the string of topics the press pool has been asking,” Kalunian said. “But that’s the point—to get a fresh perspective.”

For Florida radio host Joyce Kaufman, her goal was to ask questions relevant to the American people, not what the Washington press corps deems important.

“I watch these pressers and for the most part it’s the same question asked a hundred times by the members of the media who are literally just playing gotcha,” Kaufman told The Daily Signal. “You don’t learn anything and I had some real questions that I wanted to ask.”

During Kaufman’s briefing on Feb. 14, the conversation centered around former national security adviser Michael Flynn’s resignation. When Spicer called on Kaufman, she didn’t ask about Flynn, but rather about an issue of importance to her listeners in South Florida.

Thank you so much for this opportunity. I’m approximately 6 miles away from Mar-a-Lago right now, and the president met with Prime Minister Abe from Japan at Mar-a-Lago this weekend. And besides giving us traffic and security nightmares, there were apparently conversations that took place by telephone and with the prime minister that were in a relatively insecure dining area. There is already video of this surfacing. Will there be a [Sensitive Compartmented Information Facility] put in place in these dining areas, these public places? And one last question. When he meets with Prime Minister Netanyahu tomorrow, will they be discussing moving the embassy, and settlements?

According to Kaufman, Floridians were concerned about Trump’s discussion with Japan’s prime minister and she wanted to bring attention to it because no one else was.

Kaufman’s briefing occurred one day before Israeli Prime Minister Benjamin Netanyahu was set to arrive in the United States, but it was overshadowed by other events.

“Nobody in there asked a question about Israel. I did,” she explained to The Daily Signal. “It was relevant and it was on people’s minds, especially to my older Jewish listeners who are concerned that he’s not gonna move the embassy. So, now the White House was on notice. Look at this question, they’re already concerned about the embassy. And it came up. That’s relevant.”

Skype reporters bring a different viewpoint to the briefing room. Their questions are far different from the questions typically asked by those in the Washington and New York “media bubbles,” Crabtree noted.

“I think if you’re sitting there in those two bubbles, you don’t really know what’s going on in a true sense in the business world and everyday lives,” he said.

“When you’re on a talk radio show or you’re writing about things from the perspective of living in Atlanta or Texas or wherever these folks are that are doing these Skype seats, then you are able to better ask questions that reflect what the American people really would want to know.”

Because Skype questions differ from those from journalists physically in the briefing room, they’ve invited scrutiny—or suggestions like Rizzi’s that they’re soft balls for Spicer.

“A lot of people have asked me if my question was prescreened,” Kalunian said. “I did not have to tell them the topic of my questions. I worked with my newsroom to come up with different questions. But they were not prescreened.”

Kaufman said she was asked if her question was given to her by the White House.

“My son is a member of the media, but a different style of media, and he texted me right after the presser and said, ‘Was that question handed to you by the Trump people?’ He thought they told me what to ask, which was completely untrue,” Kaufman explained.

“I’ve been in news 30 years and it always amazes me there can be 100 newspapers in the room and they come out with the same story. I’ve always thought that instead they ought to come back with 100 different stories,” he said.

Jobe, who asked Spicer about coal restrictions and the economic future of Appalachia, said it gave people in his community the opportunity to have their voices heard and their questions answered.

“There’s a lot of us outside the big cities and we’re covering news, too,” Jobe said.

According to Kaufman, the Skype seats are accomplishing exactly what Spicer intended.

“I let the president know that we have questions, too,” Kaufman said. “More importantly, I let the press know that they’re not the only ones in the game anymore.”