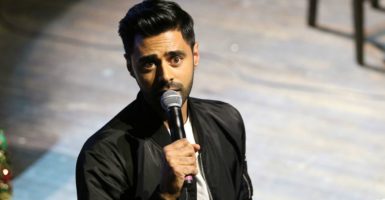 Apparently the mainstream media doesn’t have a problem being seen as the “opposition party” to President Donald Trump, to use the phrase of Trump adviser Stephen Bannon.

On Tuesday, the White House Correspondents’ Association announced that the comedian to be featured at the group’s fundraising dinner—the biggest annual event for D.C. political journalists—is Hasan Minhaj.

Minhaj, to put it mildly, is not a fan of Trump.

But don’t take my word on “The Daily Show” correspondent’s political beliefs. Here’s a sampling of statements he’s made about Trump and politics:

It is, as the cliché goes, a free country—and Minhaj is free to say whatever he wants. (And while Trump’s supporters have said, fairly, that Trump’s rhetoric is not necessarily identical with what he will do, it would certainly have been better if Trump had spoken more carefully regarding Muslims during the course of the campaign.)

(Minhaj’s remarks about Trump and ISIS)

But it is telling that the media chose such an ardent critic as the entertainer at the first White House Correspondents’ Association dinner of Trump’s presidency. After all, the mainstream media claims objectivity—that it investigates Trump and his administration’s actions because it wishes to reveal the truth, regardless of who’s in office.

Yet it’s hard to believe that—even aside from all the data showing the lack of conservatives in mainstream media—when political journalists choose to have their most important event feature someone who has shown himself to be an ideologue.

On Monday, the Pulitzer Prizes chose to honor former Reagan speechwriter Peggy Noonan “for rising to the moment with beautifully rendered columns that connected readers to the shared virtues of Americans during one of the nation’s most divisive political campaigns.”

The Wall Street Journal’s Paul Gigot, the editor of the newspaper’s editorial pages, noted that Noonan “didn’t shrink from addressing Trump’s many flaws as a candidate, but she always showed great respect for the intelligence of voters and explained the currents of American life and politics that catapulted Trump to the White House.”

Minhaj has a different attitude. Take his meandering quote to GQ in an article published in January:

I think there is some truth to what they’re saying, that there was a lot of finger-wagging on our part. And there was a lot of us-versus-them mentality. The thing that I want to maintain … is knowing that I want to humanize and hear what you have to say. ‘You voted for this person, he’s in office. That’s fine. But I firmly believe this guy doesn’t care about your economic or social well-being. He cares about himself and the title that he has. We shouldn’t be the collateral damage to this narcissist’s dream for power.’

The thing that I want to try to do is remove to the team side of it. Are you Democrat or Republican? Are you with her or are you with him? Remove that from the story and go, ‘You know people in North Carolina are suffering, right? You know the HB2 thing is really bad. You know that, right?’ Focusing on the actual American people. So hopefully we can keep the argument on Team America …

Aside from the word-salad quality of this response … what?

Where is the desire on Minhaj’s part to understand why people would think Trump was better for their economic well-being, even though he doesn’t support the big government solutions Minhaj presumably backs? Where is the effort to get how some men and women may think it’s fine—and even good—for North Carolina to restrict multi-stall bathrooms to one gender, based on a person’s gender at birth or birth certificate?

In the past two days, journalism has lifted up two quite different people—one who works to understand, even if she doesn’t agree, and one who simply mocks.

Depending on which path more journalists ultimately embrace, the future of journalism could look very different.