The Troubling Relationship Between Soros and US’ Biggest Foreign Aid Agency 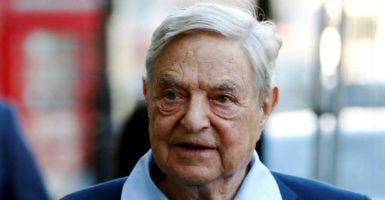 Foreign aid can help advance U.S. national interests, for example, by promoting our values globally or by demonstrating to the world the goodwill of the American people. Calls to eliminate funding outright often fail to weigh this important function.

But our lead aid agency has itself been jeopardizing this effort, and risking all-important public support, by irresponsibly funding leftist agitprop around the world—and enlisting the help of billionaire progressive activist George Soros in the process.

Trying to persuade Colombians, Macedonians, Kenyans, and the Irish to accept violations of traditional norms that are still being debated here was surely not what Congress had in mind when it passed the Foreign Assistance Act of 1961 and thereby created the U.S. Agency for International Development, or USAID.

Support for wooly leftist causes around the globe, and teaming up with the vast network of Soros organizations trying to transform the world, isn’t new for USAID.

But for the past eight years, President Barack Obama politicized the agency to such a degree that six Republican senators in mid-March rightly called on Secretary of State Rex Tillerson to launch an investigation into how the agency spends billions of taxpayer dollars.

The response from a mid-level career official at the Bureau of Legislative Affairs, Executive Secretary Joseph E. Macmanus, offered a pro-forma defense of USAID with sentences like, “The Department of State’s foreign assistance programs are rigorously designed, implemented, and monitored to ensure that they are based on core American values.”

Soros supporters are naturally pleased. But was the letter reflective of the administration’s political leadership? The slow pace of political appointments at the State Department—and throughout the executive branch—has created a situation where career bureaucrats and caretakers put in place by the previous administration retain an outsized influence.

In this instance, sources tell us that the letter the senators sent Tillerson never reached him. As I explained in the New York Post last Saturday, the Macmanus letter didn’t even acknowledge the senators’ request for a probe. Telling six senators, in essence, to take a hike is not wise at the best of times.

But it is especially unwise when the senators are raising legitimate concerns that resonate with Trump voters. What core American values were served in Colombia when USAID funds a Soros-owned media portal that attacks President Donald Trump, capitalism, and “patriarchal society”?

And what American values are served when USAID and Soros’ Open Society Foundations team up to teach Macedonians Alinskyite tactics, continuing a lamentable trend here in the states to redefine civics as street mobilization and representative democracy as “participative democracy”?

And what core American values, indeed, are served when we support same-sex marriage in countries like Ireland? The Supreme Court only read this right into the Constitution two years ago, in a hotly contested 5-4 decision that is far from settled even here.

Indeed, many of these ideas continue to be hotly debated between one part of the population that wants to retain traditional norms and another that wants to transform society.

As the senators’ letter asked, what do these things have to do with our national interests?

By refusing to heed the senators’ call, the career civil servants who have taken over our agencies were doing exactly what the Open Society Foundations requested. In an op-ed in Foreign Policy magazine two weeks ago, the head of the Open Society Initiative for Europe, Goran Buldioski, wrote that “Tillerson should ignore the letter, because there’s nothing to investigate.”

Buldioski smeared the U.S. senators, saying that their letter was “littered with inaccuracies about the foundations’ work,” and he trotted out the most tired trope in the Soros arsenal, that the “senators echo Kremlin talking points.” As I have argued here and here, it is precisely our promotion of tendentious radical ideas overseas that often drive conservatives who would ordinarily side with us into the arms of Russian President Vladimir Putin.

But the most important part of the piece came not in these clichés, but in the argument Buldioski made when he said that the senators were asking Tillerson “to shut down democracy promotion that is ‘disrespecting national sovereignty.’ Such an interpretation assumes that governments are sacrosanct and sovereign, not the voters who elect them.” (Emphasis added).

That is a tempting argument. The individual certainly is ultimately sovereign in that his own conscience is the ultimate arbiter.

This separation between “national sovereignty” and “individual sovereignty” is not new, however, but has been emphasized by those who argue for transnational governance.

In a speech in Stockholm in 2009 in which he expounded on the subject, former U.N. Secretary-General Kofi Annan said, for example: “We are now living in a true global age. We are interconnected as never before. Frontiers are increasingly irrelevant. Nation-states are increasingly powerless to act alone in the face of global forces.”

But as my friends and colleagues David Azerrad and Arthur Milikh reminded me in an email exchange on this subject, classical liberalism views countries as sovereign in the international realm.

The opening lines of the Declaration of Independence and the Constitution—“When in the Course of human events, it becomes necessary for one people to dissolve the political bands which have connected them with another” and “We the people”—make this amply clear.

When a government stops securing the unalienable rights of people, it is their right “to alter or abolish it, and to institute new government.” But individuals form a sovereign “people,” and we can remain sovereign only if we remember the common good and the social contract.

Let’s debate these things some more here at home before we spend billions trying to persuade our friends to buy into them.