Arizona Scored a Big Win With School Choice. Here’s How It Will Help Children. 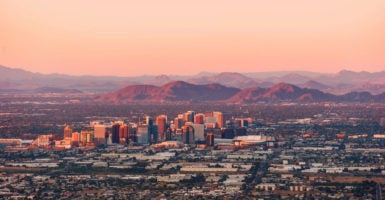 Last week, Arizona leaped to the front of the education choice pack.

Already a leader in school choice, being the first state to create education savings accounts back in 2011, Arizona Gov. Doug Ducey has now signed into law an expansion of the program, transforming it into a near-universal option for students across the state.

A near-universal education savings account policy in Arizona will make it the first in the nation to enact and implement such an approach. Nevada had previously enacted such a proposal, but the program’s implementation has been delayed due to an ongoing funding dispute.

No such barriers exist in the Grand Canyon State: Arizona’s near-universal education savings account policy is on firm financial and legal ground, and with five years of experience running their existing policy, state administrators have gained critical experience in implementation and program management.

Education savings accounts represent a breakthrough in public education financing. Instead of sending funding directly to district schools, and then assigning children to those schools based on where their parents live, parents receive 90 percent of what the state would have spent on their child in their district school, with funds being deposited directly into a parent-controlled account.

In Arizona currently, that is typically around $5,300 for a student, annually, and closer to $14,000 annually for a child with special needs.

Once the state per-pupil funds are deposited into a child’s account, the family can then use those funds for any education-related service, product, or provider. Parents can roll over unused funds from year to year in anticipation of future education-related expenses.

This new expansion made Arizona’s education savings account option a near-universal program. Enrollment, while open to all families, will initially be limited to a small proportion of public school enrollment—approximately 5,500 students per year. That number can, however, be expanded moving forward.

The near-universal education savings account option is also being phased in over a four-year period, with participation open to any student in either first, sixth, or ninth grade during the 2017-2018 school year.

That four-year phase-in comes as an add-on to existing eligibility. The program is already open to several categories of children, including:

Families in Arizona had already been using the education savings account option to tailor a customized educational experience for their children.

As Jonathan Butcher and I have found, approximately 30 percent of Arizona families use their accounts to craft an à la carte educational experience for their children, paying private school tuition, hiring private tutors, paying for special education services and therapies, purchasing textbooks, and much more.

Arizona is a leader in #edreform. Thanks to @dougducey and all the Arizona leaders working to advance the cause this session. https://t.co/tdvCAOP4US

These accounts have already been changing lives for eligible families in Arizona—particularly families of children with special needs.

As Hines explained to EdChoice, after EJ was diagnosed with autism, the family spent several years fighting with their district school in Michigan to get services that were appropriate for him.

On the cusp of engaging in legal proceedings, Hines moved to Arizona and eventually began participating in the education savings account option.

She now uses her account to create a completely customized learning experience for EJ: They pay for part-time private schooling, private tutoring, therapy, and music lessons.

Now, this option is open to all students in the state of Arizona, enabling them to match their own share of education funds to the tailored learning options that will help them blossom.

In states like Arkansas, Wyoming, Oklahoma, New Hampshire, and Missouri, education savings accounts are currently being given serious consideration. And for good reason: As more and more states adopt this model, growing evidence suggests it’s working well for participating families.

Today, Arizona, Florida, Mississippi, Tennessee, and Nevada have created education savings accounts, and Arizona and Nevada have demonstrated it is possible to enact a near-universal program. In the coming months, more states are likely to be added to that tally.

The education savings account waters have been tested, and are indeed warm. It’s time for other states to come on in and embrace the future of school choice.