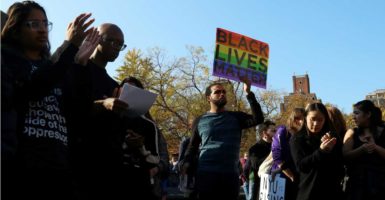 Students at the Claremont Colleges, a consortium of undergraduate and graduate liberal arts colleges in Claremont, California, blocked entrances to the building that Mac Donald was scheduled to speak in.

Mac Donald, a senior fellow at the Manhattan Institute, a conservative think tank, was giving a speech titled “The War on Police,” a reference to her 2016 book about how political rhetoric against police makes America less safe.

Mac Donald was forced to livestream her speech after protesters blocked students and professors from entering the building.

According to the school’s newspaper, The Forum, 250 students watched Mac Donald speak. Students had to submit questions via email.

“Among other chants, protesters yelled ‘Black Lives Matter’ and ‘How do you spell fascism? CMC!’ while banging on windows of the [Athenaeum],” according to The Forum.

Mac Donald was a guest of the Rose Institute of State and Local Government, a research institute on the campus of Claremont McKenna College, a member of the Claremont Consortium.

Peter Uvin, vice president of academic affairs for Claremont McKenna College, said in an email to students after the incident: “I fully understand that people have strong opinions and different—often painful—experiences with the issues Heather Mac Donald discusses. I also understand that words can hurt.”

Uvin went on to condemn the students’ behavior, saying, “What we face here is not an attempt to demonstrate, or to ask tough questions of our speaker, all of which are both protected and cherished on this campus, but rather to make it impossible for her to speak, for you to listen, and for all of us to debate. This we could not accept.”

Many conservative speakers have been protested on college campuses in recent months.

In March, students protested Charles Murray, a fellow at the American Enterprise Institute, while he was giving a speech at Middlebury College. Milo Yiannopoulos, a former editor at Breitbart, was also violently protested when he attempted to speak at Berkeley this past February.

Murray was able to give his speech, talking over screaming demonstrators, while Yiannopoulos was forced to cancel his speech and leave campus, thanks to a police escort.

Mary Clare Reim, an education policy analyst at The Heritage Foundation, cited a pattern, telling The Daily Signal in an email:

We can now add Heather Mac Donald to the long list of experts whose voices have been shut down on college campuses. From Middlebury to Berkeley, college students and administrators continue to treat conservative viewpoints with hostility and sometimes violence.

Reim went on to encourage institutions to re-evaluate their purpose, writing, “Universities have an obligation to protect First Amendment rights on campus. Unfortunately, recent events suggest that many universities no longer take that obligation seriously.”