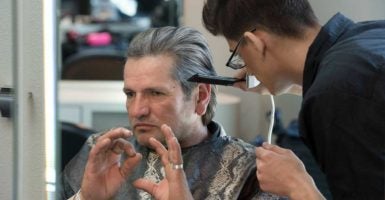 Giving haircuts to the homeless without a license is one of the many jobs opened up by Arizona's reforms. (Photo: Andy Alfaro/Zuma Press/Newscom)

This past week saw two major reforms for Arizona’s occupational licensing regime, which could kick off a lightening of the regulatory burden in the state.

On March 29, Arizona Gov. Doug Ducey issued an executive order requiring all state licensing boards to report on their minimum requirements for obtaining an occupational license. Should those requirements exceed national averages, the order requires that boards justify them in “specific reference to potential harm to individual Arizonans.”

This was followed by an even more sweeping change on March 30, when Ducey signed SB 1437 into law.

Known as the Right to Earn a Living Act, the legislation restricts Arizona’s regulatory boards from issuing regulations which “on their face or in their effect limit in the entry into a profession or trade,” unless they can be shown necessary to the health and safety of Arizonans.

Taken together, these reforms represent a sweeping change to Arizona’s occupational licensing regime, which is considered one of the most burdensome in the nation.

The burden that occupational licensing places on individuals and the economy has become an increasingly salient and bipartisan issue in recent years. In 2012, the Institute for Justice, a public interest law firm, released an exhaustive report on the topic. Titled “License to Work,” the study found that occupational licensing laws in the U.S. were costing the country almost 3 million jobs and over $200 billion a year.

“[Occupational licensing] does this by preventing competition, by preventing people from working in a field,” said Paul Avelar, an attorney with Institute for Justice Arizona. “When you have fewer professionals in a field, you have higher prices for consumers.”

This conclusion was supported by a 2015 nationwide study on occupational licensing published by the Obama White House. This report found that a quarter of professions required some form of licensure, a five-fold increase since the 1950s, when only 5 percent of occupations needed a government permission slip.

The end result of this growth in professional regulation, according to the White House report, was to “raise the price of goods and services, restrict employment opportunities, and make it more difficult for workers to take their skills across state lines.”

Arizona, despite its free market reputation, has proven particularly restrictive in terms of occupational licensing. The 2012 Institute for Justice report ranked Arizona the sixth most restrictive state in the country.

Most of this, Avelar says, is due to the sheer number of professions that Arizona has licensed. Some 64 low- to moderate-income professions in the Grand Canyon State require licenses, including even door repairmen and security alarm installers.

Arizona’s state regulatory boards, which are responsible for establishing licensing requirements, have been aggressive in how they use their authority. In one instance, a Tucson resident was investigated for offering free haircuts to the homeless without a license by the Arizona State Board of Cosmetology.

The board eventually backed down after Ducey sent a scathing letter calling for it to end the “outrageous” investigation. Ducey called the free haircuts “exactly the kind of citizenship we should be encouraging and celebrating.”

Indeed, Ducey has made reforming occupational licensing a major focus of his administration. His first action upon taking office in 2015 was to issue a moratorium on regulatory rulemaking by state agencies. This was followed by taking aim at Arizona’s licensing laws in his second State of the State address, where Ducey said the practice resulted in “a maze of bureaucracy for small business people looking to earn an honest living.”

“The state of Arizona actually licenses talent agents. I say let’s leave the job of finding new talent to Adam Levine and Gwen Stefani, not state government,” he said in the address.

That same year, Ducey worked closely with the Legislature on two bills that would have substantially reorganized the state’s health care licensing board. But as Watchdog previously reported, those efforts were frustrated when opposition from board members forced a withdrawal of one bill and amended another to the extent that Ducey vetoed it.

Since that initial defeat, momentum for reform has only grown.

At the beginning of the legislative session, state Sen. Nancy Barto, a Scottsdale-area Republican, introduced the aforementioned Right to Earn a Living Act, working in conjunction with the Goldwater Institute, a free-market think tank.

The purpose of that bill, according to Goldwater Institute attorney Jonathan Riches, is to shift the burden of justifying regulations off the citizen and onto the government. Riches said this would stop courts from “rubber-stamping impairments to getting a license.”

Riches also said he hopes the new judicial standards now applicable to occupational licensing will get regulators to think more about the impact of regulations.

SB 1437 encountered some opposition from Democrats, however. During the March 30 House session, state Rep. Kirsten Engel, D-Tucson, fretted that requiring government to show a public health necessity for new regulations might to be too stringent a standard. Still, the House passed the bill by a 34-20 vote, and the governor signed it later that day.

Combined with Ducey’s order for a comprehensive review of state licensing regulation, Arizona could move from one of the most restrictive occupational licensing states to one of the freest.

Christian Britschgi is a reporter for Arizona Watchdog.