How Federalism Can Give Head Start a New Start 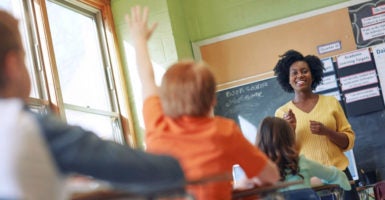 The Head Start Improvement Act would give states full control of how they spend Head Start dollars. (Photo: iStock Photos)

Wherever one sits on the ideological spectrum, we all agree that our children deserve access to a high-quality education.

The American economy will not grow without qualified workers and our democracy will not thrive without an informed citizenry.

This is critical to the very idea of America—everyone should be free to reach as high as their talent and work ethic will take them, regardless of where one begins in life.

Too often, underprivileged families lack the opportunity to enroll their children in pre-kindergarten programs, and many students from these families begin their education behind their peers.

A common fear is that this initial achievement gap may never be closed during the child’s education and the student may never reach his or her full potential.

The Head Start program, created in 1965, was intended to close this gap. One of the pillars of President Lyndon Johnson’s Great Society, Head Start attempts to alleviate the education gap between low-income children and their peers by providing comprehensive early childhood education services.

The program also provides medical and nutritional services while engaging parents in their child’s education.

Funding and enrollment in the program have skyrocketed since its inception. In fiscal year 2015, Head Start had nearly 1 million enrollees and received $8.6 billion in federal funding.

Unfortunately, despite the best of intentions, these investments have failed to improve academic achievement for far too many low-income students.

A recent long-term study of the Head Start program by the Department of Health and Human Services tracked 5,000 three- and four-year-old children from pre-K to third grade and found no improvement in language skills, literacy, math, or overall school performance by the time enrollees entered third grade.

… there were initial positive impacts from having access to Head Start, but by the end of 3rd grade there were very few impacts found for either cohort in any of the four domains of cognitive, social-emotional, health and parenting practices. The few impacts that were found did not show a clear pattern of favorable or unfavorable impacts for children.

It is clear that Head Start needs a new start, and we need a new approach to early childhood education. To do that, I am introducing the Head Start Improvement Act.

The bill would give states full control of how they spend Head Start dollars and is a companion bill to legislation introduced by Utah Sen. Mike Lee.

If our bill were enacted, states would be free of the strings that always accompany money earmarked for federal programs, and they would have the flexibility to ensure pre-K dollars flow to where they will be used most effectively.

State legislators in Indiana and across the country support this concept.

Indiana state Sen. Luke Kenley, a leading voice on education issues in my home state, recently shared with me that “turning these funds into a block grant would be a benefit to both state and federal budgets, and a tremendous step forward in providing a good pre-K program to the children of Indiana.”

Federal regulations and mandates have not improved education outcomes for low-income children. Putting more money into central planning will not lead to better outcomes for these kids.

Instead, we need to empower the laboratories of our democracy, the states. They are in the best position to know how to design and fund pre-K programs for their unique populations, and we will only see successful pre-K policy if they are given the flexibility they need to succeed.