It’s Really Hard to Fire a VA Employee. This Bill Would Change That. 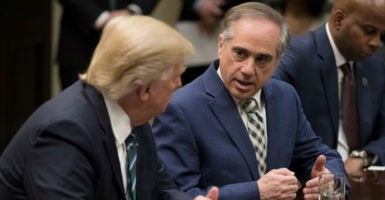 Veterans groups are backing a Republican bill to make it easier to fire bad employees at the Department of Veterans Affairs, but the legislation faces an uphill battle in the Senate despite cases of employees who kept their jobs after misconduct, including a worker who committed armed robbery and a nurse who was intoxicated during a surgical procedure.

Noting a recent instance in which the department was required to retain an employee caught looking at pornography during work hours, Veterans Affairs Secretary David Shulkin on Friday urged the Senate to pass legislation that cleared the House last month.

However, the VA Accountability First Act of 2017, sponsored by Veterans Affairs Chairman Phil Roe, R-Tenn., passed with only 10 votes from House Democrats. The committee’s ranking member, Rep. Tim Walz, D-Minn., voted against it.

In touting the legislation, Roe noted that the VA was unable to discipline a hospital employee in Puerto Rico who was convicted of committing armed robbery.

Elizabeth Rivera returned to work wearing a GPS monitor ankle bracelet, The Daily Caller News Foundation reported last year. Rivera had pleaded guilty and initially was fired, but pointed out that management’s labor relations negotiator was a registered sex offender and the hospital director had been arrested for possession of painkiller drugs.

In a separate case, Roe noted, the VA couldn’t punish a nurse,  Richard Pieri, who police said was intoxicated in February while participating in an emergency appendectomy for a veteran. Pieri, employed at the VA Medical Center in Wilkes-Bare, Pennsylvania, reportedly told authorities that he forgot he was on call and had gotten drunk at a local casino. He resigned in May.

And in a third case cited by Roe, the agency couldn’t hold employees accountable for management failures in construction projects.

The legislation, sponsored by Sen. Marco Rubio, R-Fla., is not yet scheduled for a vote in the Senate. The Rubio bill would shorten the termination and appeals process for VA employees who were engaged in misconduct. The appeals process can take up to a year or longer.

“After the House passed the bill last month, I’m hopeful the Senate will take up our legislation soon,” Rubio told The Daily Signal in a statement. “?With the Trump Administration’s strong support for our efforts to bring real accountability to the VA, we have a great opportunity to do right by our veterans and help them get the quality care they have earned.”

The House bill also would allow the VA secretary to recoup bonuses awarded to employees later found to have committed some form of misconduct and to reduce pensions to VA employees convicted of felonies affecting their job performance.

In 2014, the VA inspector general and subsequent congressional investigations concluded the agency had a pattern of long waits for veterans to get appointments for care and that employees falsified documents, leading to denial of care and in some cases even death. However, few VA employees were dismissed.

While the scandal provoked bipartisan outrage, the difficulty in passing personnel reforms for VA could be a harbinger of difficulty in broader reforms President Donald Trump might seek as part of his “draining the swamp” agenda for the federal government.

Senate Veterans Affairs Chairman Johnny Isakson, R-Ga., said he is willing to work with Democrats to push through a bill acceptable to all sides.

“I’m committed to moving legislation that gives Secretary Shulkin the tools to discipline bad employees,” Isakson told The Daily Signal in a prepared statement. “Accountability reform is a top priority, and I look forward to continuing to work with House VA committee Chairman Phil Roe and ranking member Tim Walz, as well as with Senate VA committee ranking member Jon Tester and Secretary Shulkin, to accomplish this goal.”

Democrats say they are concerned about collective bargaining and due process, and it’s not likely something identical to the House bill could pass the Senate, said Carlos Fuentes, director of national legislative service for the Veterans of Foreign Wars.

This wouldn’t be the first attempt at tougher accountability standards. The VA expedited the firing of Sharon Helman, an executive at the agency’s Phoenix clinic, under a 2014 law–the Veterans Access, Choice and Accountability Act–signed by President Barack Obama.

When Helman sued, however, the Obama Justice Department in 2016 opted against defending the law after an initial setback in a lower court. Helman was convicted last year for accepting $50,000 worth of gifts without reporting it.

The Veterans of Foreign Wars backs the legislation but urges lawmakers to be cautious that it will hold up in court, Fuentes said.

“It’s important to pass legislation that the president can sign, but it’s more important that it won’t be struck down,” Fuentes told The Daily Signal in a phone interview.

The new legislation would invalidate collective bargaining agreements for disciplinary purposes, the first such bill to do so, he said.

“Before the secretary can discipline employees, there has to be time to go through arbitration or mitigation to review the charges,” Fuentes said of the current situation. “That process can take up to a year, and these employees can continue to collect their paychecks the whole time.”

Veterans deserve a first-rate agency to provide for their needs and the VA is excellent. Unfortunately, it is marred from time to time by badly behaved personnel who, because of a complicated system of discipline, [are] difficult to remove. Legislation to improve the process and make it easier to deal with these few problem employees would help restore trust in what is otherwise an excellent system.

The American Federation of Government Employees, the union that represents VA employees and other federal workers, did not respond to phone calls and emails about the legislation from The Daily Signal.

In a March 9 statement, AFGE National President David Cox, who served as a VA nurse for 20 years, denounced the bill:

Once again, some lawmakers have completely ignored the evidence that the VA provides veterans the best – and only – integrated health care system tailored entirely to their needs. Instead of hiring the more than 45,000 front-line caregivers our veterans desperately need, they’d rather spend their time sticking it to the people who serve veterans every day.

In expressing support for the bill late last week, Shulkin, who has been VA secretary since his Feb. 13 confirmation by the Senate,  complained about a recent case involving an employee from a Houston VA clinic who was caught watching pornography in the presence of a patient.

“This is an example of why we need accountability legislation as soon as possible,” Shulkin, a former undersecretary of veteran affairs for health, said in his prepared statement. “It’s unacceptable that VA has to wait 30 days to act on a proposed removal.”

“This legislation doesn’t just build back the trust of America’s veterans; it gives VA employees the trust to know that bad actors within the department will no longer have the power to taint their good name,” Roe said in a formal statement after the House passed the bill making it easier to fire bad employees.

“We want strong accountability,” Fuentes said. “We also know you can’t fire your way to success, which is why we also support the House bill to make it easier to hire and retain high quality workers at VA.”