Ailing US Military Needs More Than a Continuing Resolution 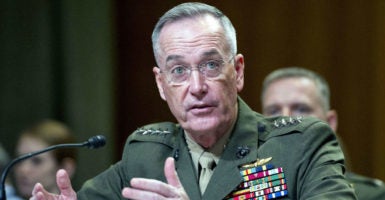 The House Armed Services Committee scheduled a hearing Wednesday with the chiefs of staff of the U.S. armed forces to assess what the impact of a yearlong continuing budget resolution would be on the military.

That such a hearing is even necessary is an indication of how far Congress has veered from accomplishing its constitutional responsibilities.

Despite promises in 2015 that Congress was going to return to “regular order” and pass appropriations bills on time, Congress now finds itself in the same place it has been for the last seven years.

This year marks the eighth year in a row where Congress was unable to pass a defense appropriations bill on time and a continuing resolution was needed.

The House actually passed the 2017 defense appropriations bill on March 8 by a 371-48 margin, reflecting strong bipartisan support—but the bill has been stuck in the Senate ever since and become a victim of gridlock.

The impacts of a continuing resolution on the military are many.

Funding levels are frozen at 2016 levels, which for a dynamic and changing military, means new initiatives are literally stopped in their tracks. New equipment programs and innovative solutions cease for lack of money.

Uncertainty reigns, as no one understands their expected funding levels, which generates numerous cases of inefficiency and waste.

The Heritage Foundation has recently assessed that in 2017, the readiness of our military is dangerously low because of chronic underfunding, dangerous reductions in size, and consequent overuse.

Because the armed forces start from a relative position of budget starvation, the impact of this year’s continuing resolution is particularly problematic for the U.S. military.

Military leaders report that if the continuing resolution continues, they will be forced to cut billions from needed programs, including halting the recruitment of needed service members, stopping the payment of bonuses, canceling ship deployments in the Navy, grounding aircraft including 24 squadrons in the Air Force, and canceling training events in the Army.

Programs to replace and repair equipment would be similarly affected, slowing the needed arrival of equipment to fill holes and replace aging and outdated platforms such as 1960s-era aircraft and ships.

None of this addresses the real problem—that over the last six years, military readiness and capability have deteriorated to the point where our nation faces an ever-increasing risk of not being able to defend our interests.

Even when and if Congress passes the defense appropriations bill for 2017, which was based on an Obama budget request, it will not change the trajectory of defense readiness.

>>> Defense Leaders Agree: US Military Readiness Is at a Dangerous Low

To do that will require Congress to approve the Trump administration’s March 2017 budget request, which asked for $30 billion for “urgent war-fighting readiness needs and to begin a sustained effort to rebuild the U.S. armed forces.”

Within this urgent request are funds needed to quickly defeat ISIS, for operations and maintenance to address shortfalls in training and maintenance, and to procure desperately needed aircraft, missiles, missile defenses, and ships.

With this money, the military can start to pull itself out of the deep readiness hole that has been steadily dug over the last six plus years.

Heritage has explained how sufficient funding sources already exist within the federal budget from programs that are unnecessary or wasteful to offset these increases for defense.

National defense is not a partisan issue. A strong national defense deters potential adversaries and reduces the risk that America will find itself at war. In the event deterrence fails, it ensures the success and reduces casualties of soldiers, sailors, marines, and airmen on the battlefield.

Congress must act to ensure the readiness and ability of our armed forces to defend our nation. The time is now.