All Sitting Supreme Court Justices Have Been Involved With Federalist Society, Labeled a ‘Front’ Group by Democrats 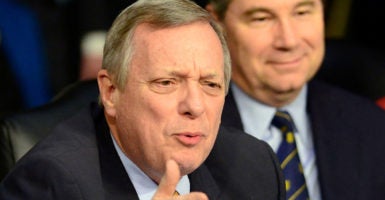 “I don’t know what Donald Trump’s judicial philosophy [is] as president, but we sure do know the judicial philosophy of the Federalist Society, which was given the responsibility of coming up with a list of nominees to fill the [Antonin] Scalia vacancy on the Supreme Court,” Sen. Dick Durbin, D-Ill., said Monday before Gorsuch’s Senate Judiciary Committee vote.

A new report, however, released Monday by the conservative nonprofit America Rising Squared, or AR2, shows that all current U.S Supreme Court justices, appointed by both Democrats and Republicans, and not just Gorsuch, have been involved with the Federalist Society.

The Federalist Society, established in 1982, was “founded on the principles that the state exists to preserve freedom, that the separation of governmental powers is central to our Constitution, and that it is emphatically the province and duty of the judiciary to say what the law is, not what it should be,” according to the society’s website.

Durbin further voiced his opposition to the involvement of the Federalist Society in the Supreme Court vetting process.

“This president chose … a candidate off lists put together by what I consider to be front groups for big special interests,” Whitehouse said. “This nominee’s candidacy was born on a list prepared by right-wing, pro-corporate front groups.”

The report from America Rising Squared shows, however, that justices appointed by both Republican and Democrat presidents have been involved with the the Federalist Society.

Justice Sonia Sotomayor, nominated by Obama in 2009, addressed a meeting of the Federalist Society that year.

Jeremy Adler, the communications director at America Rising Squared, told The Daily Signal in an email that “Democrats have no grounds to oppose Judge Gorsuch and are reaching for absurd and untrue claims about the Federalist Society to try and smear his immaculate record.”

Individuals who are familiar with the Federalist Society, Adler said, will see that these accusations are baseless.

“Anyone with an understanding of the Federalist Society would quickly recognize that they are not some secretive, extreme ‘front group,’ but are an upstanding organization that exists to preserve freedom and defend the Constitution,” Adler said.

John Malcolm, the director of the Edwin Meese III Center for Legal and Judicial Studies and a senior legal fellow at The Heritage Foundation, told The Daily Signal in an email that the involvement of justices with the Federalist Society should be recognized and commended.

“The Federalist Society is no more ‘extreme’ than its liberal counterpart, the American Constitution Society for Law and Policy,” Malcolm said.  “It is heartening, but not surprising, to know that conservative and liberal jurists and scholars regularly participate in Federalist Society events, and that they also do so at [American Constitution Society] events.”

Trump nominated Gorsuch in January to fill the seat of Scalia, who died in February 2016.