In ‘Scary’ Episode, This Employer Is Hoisted in Effigy by Anti-Trump Agitators 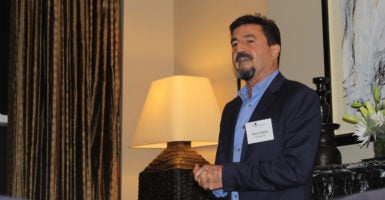 Anthony J. Saliba is no shrinking violet. As a prominent Chicago financier as well as a trustee of the nation’s leading conservative think tank, he has seen his share of rough-and-tumble battles.

“It was just scary that my picture was bigger than life on a big doll they were carrying around,” Tony Saliba says.

But Tony Saliba hadn’t ever seen a crude effigy of himself paraded around, one that represented him a puppeteer manipulating the president of the United States. Until recently at a landmark of Chicago’s financial district, anyway.

That’s when 100 to 200 protesters, depending on who is counting, descended on the Bank of America Building on South LaSalle Street, in effect looking for Saliba. His business offices are on an upper floor of the 45-floor structure.

“I was, like, wow,” Saliba says in a phone interview with The Daily Signal.

The demonstrators marched and chanted, blocked the street and main entrance, and carried signs with messages directed at President Donald Trump, Saliba himself, and The Heritage Foundation, the Washington-based think tank where the entrepreneur has served on the Board of Trustees since 2012.

“They filled the revolving doors so nobody could come or go,” Saliba says, who learned about the protest afterward.

Chicago police said they arrested eight men and women, ages 26 to 78, and charged them with criminal trespass for blocking the doors to the building.

Since Trump’s inauguration, the Windy City has been the stage for some sizable protests, including a series of “Resist Trump Tuesdays” during the new administration’s first 100 days.

The reason for the self-described resistance March 21: Trump’s proposed budget cuts across most of the government, many of them recommended by Heritage policy experts as part of the think tank’s “Blueprint for Balance.”

In particular, the protesters said they were angry about recommended cuts in spending at the Department of Housing and Urban Development. Some of their signs and slogans singled out HUD Secretary Ben Carson.

Heritage analysts, among others, have identified specific HUD programs as ineffective and wasteful.

As it turned out, Saliba didn’t go to his office that day. He was at home, fighting a cold, and only learned about the disruption a day later when family members, co-workers, and friends began emailing him with links to photos and stories posted online.

“They used my name and address and Heritage board affiliation,” he says of the protesters in the interview with The Daily Signal, which is Heritage’s multimedia news organization.

Saliba, 61, admits to being amused at first—until he showed the photos and stories several days later to his wife, Moira, and she “freaked out.”

“She didn’t care how long ago it was, she cared for her babies,” he says. “She said it’s no laughing matter, someone marching along with your name and picture, bigger than life.”

The Salibas have two teenage children.

“She is still a little rattled,” Saliba says of his wife. “She wasn’t too thrilled about my talking to you.”

Protesters outside the Bank of America Building on March 21 hold up an effigy bearing a photo of Tony Saliba’s face with a puppet topped by a photo of President Donald Trump. In this photo, the yellow paper covers Saliba’s name and the words “Heritage Found.” visible in other photos. (Photo: Tyler LaRiviere)

Saliba didn’t dwell on the incident, telling Heritage Foundation President Jim DeMint about it only in response to a March 28 email from DeMint to Heritage board members about the collapse of House Republican leadership’s Obamacare replacement bill.

It was a bit intimidating, he admits in retrospect, seeing a blown-up photo of his smiling face mounted atop an effigy that cradled a hand puppet with Trump’s face on it.

“It was just scary that my picture was bigger than life on a big doll they were carrying around,” Saliba says of the effigy. “I was holding a puppet of Trump’s head on a stick, like I was a puppet master.”

The protesters also pasted fake U.S. currency to the images of Saliba and Trump.

Saliba, considered a pioneer and leader in the Chicago derivatives market, was the only options trader to be profiled in the best-selling 1989 book “Market Wizards.” He is now an author himself.

Saliba, who got his start at the Chicago Board Options Exchange, previously was chief executive officer of LiquidPoint, a Chicago-based options technology company he started in 1999.

He also became an executive managing director at ConvergEx Group, which provides technologies for asset managers and financial intermediaries, after it bought LiquidPoint in 2007. To this day, LiquidPoint employs close to 100 people in Chicago, most of whom Saliba hired himself.

A member of the Senior Caucus who sat down inside the revolving doors checks out a message for The Heritage Foundation protesting President Donald Trump’s proposed cuts in the budget of the Department of Housing and Urban Development. (Photo: Tyler LaRiviere)

The March 21 demonstration targeting him was organized by Fair Economy Illinois, an affiliate of the Chicago-based community-organizing group National People’s Action, and the Jane Addams Senior Caucus, which dedicates itself to what it calls economic, racial, and social justice for older Americans.

“Anthony Saliba, as a board member of The Heritage Foundation, we are calling on you to stop advancing these destructive proposals, which will increase homelessness across our city, state, and country,” said rally speaker Kevin McLemore, pastor of Epiphany United Church of Christ in Chicago, according to the socialist magazine In These Times.

“We are here because we know that Trump is a puppet of The Heritage Foundation’s corporate agenda,” caucus member Don Bell told In These Times.

Brace soul Lori arrested we got your back #housing4all #ResistTrumpTuesdays pic.twitter.com/iBHUu7J8IF

Saliba credits police for handling the situation calmly, and for preventing protesters from reaching the elevators in the Bank of America Building.

What seems to bug Saliba is the personal attack by Trump opponents who probably have no idea that his own dozen or so business ventures have provided jobs for about 500 residents of Chicago since 1981.

“They don’t even get the good things I do,” he says. “That’s the narrow-mindedness, and they look at business only as profit.”

His largest employee head count at one time was 90, Saliba says, and for about 10 years he employed 85 people.

As Bloomberg Businessweek recently reported, Saliba is a main player in another potential job creator: the proposed sale of the cash-strapped Chicago Stock Exchange to investors led by a Chinese conglomerate.

“If the $27 million deal wins approval from the U.S. Securities and Exchange Commission,” Bloomberg wrote, “one of America’s oldest trading venues will have a new focus: courting listings from small companies, particularly those based in China.”

Although Saliba doesn’t volunteer it in this interview, he and his wife are financial supporters of Catholic Charities and other causes, including the local Lincoln Park Community Shelter, a facility for the homeless; the Evans Scholars Foundation, which enables poor children to attend college; and the Gary Sinise Foundation, which assists men and women of the armed forces wounded in defense of the nation. “They’re really proud of themselves, you know,” Saliba says of the protesters, citing their Facebook page with its photos and videos of this and past demonstrations.

One blurb on the Facebook page reads: “Heritage is a right-wing think tank … and their members profit from the slashing of federal programs that serve the most vulnerable in our communities. They are behind Trump’s budget cuts and we will continue blocking their agenda until HUD and other essential government agencies are fully funded.”

Reflecting on the highly charged anti-Trump rhetoric and disruptions continuing across the nation, Saliba says he tends to agree with an assessment shared with him by Michael Needham, CEO of Heritage Action for America, the think tank’s lobbying affiliate.

“Settle in and consider this disruptive protesting is going to be the baseline for the bulk of the next year or so,” Saliba says. “They may try to keep these things going until the midterms.”

“They’re trying to disrupt [the Trump administration] and continue to energize their base. You gotta give them credit, they seem to be pretty organized.”

Trump is a corporate puppet of the @heritage foundation! We need a #FullyFundedHUDBUDGET Seniors deserve dignity #ResistTrumpTuesdays pic.twitter.com/gpf5iOZ2Bo

DeMint, who attracted heat on the national stage as a conservative congressman and senator from South Carolina, says he has seen this sort of thing many times before.

“When liberals lose political arguments, they resort to shameless intimidation tactics,” DeMint told The Daily Signal in an email, adding:

Tony is a patriot and successful businessman, and he shouldn’t have to go through this. Unfortunately, he’s not the only one and this isn’t a recent phenomenon, because for years liberals have been tormenting anyone, including businesses and private citizens, who dares disagree with the liberal, progressive line. The good news is that more Americans are refusing to back down, because they are tired of being silenced by liberal ideas of political correctness.

The Facebook page of the group Resist Trump Tuesdays Chicago posted photos of the protest, including images of Saliba in effigy and signs addressing him or Heritage:

‘It’s About Our Freedoms’

Saliba quips that he is thinking of shaving off his trademark mustache and goatee so he won’t be recognizable.

He describes himself as both optimistic in the short term that Trump’s free-market policies will give the economy a shot in the arm and not certain that in the long term the nation will hold fast to the principles that Heritage celebrates: free enterprise, limited government, individual freedom, traditional American values, and a strong national defense.

But he thinks Trump will lean on conservative ideas, Saliba says, and he’s proud to be part of advancing conservative policies through Heritage and the think tank’s recommendations to a receptive Republican president and Congress.

“It is about our freedoms, and Heritage does that work,” he says, adding:

I’m happy that I’m a lightning rod, in that regard, with the Heritage brand on it because of what we stand for and all the good we do. It’s an island in the sea of seemingly meaningless change, a port in the storm.

Or, as Saliba emailed DeMint in thanking him for expressing concern: “I guess I’m always up for a fight for our principles.”