We Hear You: I’m a Sailor, a Marine, and a Transgender Woman Who Was Born This Way 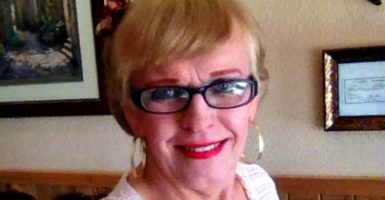 Editor’s note: One reader who we heard from awhile back marked March 31 as Transgender Day of Visibility. So this weekend seemed like a fitting opportunity  to publish the letter as the lead item in our mailbag.—Ken McIntyre

Dear Daily Signal: At first I was going to ignore Kelsey Harkness’ video report and the comments, but there comes a time when what I served our great nation for must be stated plainly (“Lost Voices in the Transgender Debate: Liberals and Conservatives Unite”).

I served for all Americans. I served so that you may hold opinions not based in logic, reason, or science. I served for your rights and freedoms. So by all means, feel free to express your beliefs and opinions.

I served as an enlisted person in the Navy and as an officer in the best fighting force in the world, the Marine Corps. I am a 1984 graduate of the Naval Academy, a parent of four, a grandparent of six, a serial entrepreneur, and I know me better than anyone.

The only people who know me and my body are my doctors at the KU Women’s Health Specialty Center in Overland Park, Kansas, and they know that I am a woman. Yes, I was born with male genitalia, but I am woman through and through.

I have studied me and the science behind me longer than many of you have been alive. For you to presume to know me, a transsexual woman, is absurd to the height of ignorance. I was born a woman from the very beginning, but my body physically and outwardly expressed as male.

The brain is the source of all gender, not what’s between your legs. Like 99.95 percent of all people, your gender most likely aligns with your brain so you have no issues to address personally. This is an evolutionary requirement for the survival of the species.

For the other .05 percent, the brain and genitals do not align: a statistical number that holds true for all human populations planetwide. Like all human physical characteristics, gender expresses on a statistical distribution, a spectrum.

There was a time in our country when conversion therapy was forced on those who were left-handed to make them right-handed, because righteous people were by definition right-handed. You can teach a person to use their right hand if they were born left-handed, but are they really right-handed? No.

What about hair color, texture, degree of curl, or straightness? What about tallness or shortness? Are all humans born with 10 fingers and 10 toes? Statistically, most humans are. However, some are born with more or less.

Do all humans fall into one standard shape and size and color, texture, functionality of genitals (whether male of female)? No. Huge statistical variety there, too.

Are only “real” humans born without physical impairments such as spina bifida, cleft palate, weakened heart valves, missing organs, extra organs? No. All of these occur on a statistical distribution, which means while they are less likely to occur than the norm, they can and do occur. Are those people any less human than you?

Why must gender be excluded from the statistical variability that is so easily observed in all of human nature? Well, it’s not.

So I am a transgender woman who was born this way whether you accept modern, evidence-based, peer-reviewed biological and psychological science or not. My being a woman is not dependent upon your approval. I am a woman. Period. Gender dysphoria is caused by the lack of congruence, the misalignment, between expressed sexual and secondary sexual characteristics and the brain. It is not a mental disorder, but a physical issue much like being born with a physical disability.

Thank God, though, we know how to correct the misalignment.

So it is your turn to stand in defense of my rights now. Trans people are under assault. Our rights, our freedoms, the freedoms and rights you take for granted, are being rolled back or denied. Gender identity needs to be a protected class of minorities within our national and state laws. Stand with me. Hugs and Semper Fi!—Cassandra Leigh Williamson

Note: Cassandra Leigh Williamson, who lives in a small town in Missouri, has a website at cassandraleighwilliamson.com and recently began a video blog on YouTube called “Cassandra Leigh.”

Dear Daily Signal: You are more of a news organization than any of the “lamestream” media (“Journalists from BuzzFeed, New York Times Assess Daily Signal’s Splash in White House Press ‘Pool’”). Your Morning Bell email is the first one I read in the a.m. I look forward to reading it with my coffee.

I cannot trust any of the lamestream media. Look what they did all through the Obama administration. Lie upon lie. I have not read or watched any of them since the last two years of President George W. Bush.

How can anyone (with a brain) believe anything they say, especially after seeing their complete breakdown when my president, Donald Trump, won the election. I want you to know that you are a great news team. Don’t let anyone cause you to doubt that fact.—Hazel Sproull, Glendale, Ariz.

Dear Daily Signal: I’ve just started reading articles in The Daily Signal as a direct consequence of The Washington Post’s position that it shouldn’t be part of the White House press pool (“The Daily Signal Won’t Be Bullied by the Establishment Media”).  I am supportive of more diverse voices in the media.

I’m not a Republican, but I am absolutely tired of one-sided coverage and the demonization of close to half the population in the U.S. I think it’s repugnant that conservatives are portrayed as racist, sexist xenophobes in most of what I read. That is not my first-hand experience, and I find it analogous to name-calling on the playground.

Disappointingly, this intellectually dishonest approach is what currently passes for thoughtful discourse in many circles. It forces one to be skeptical of anything one reads these days, which is the main reason why we need different views.—Dean Mathieson

The GOP Split Over Obamacare Replacement

Dear Daily Signal: The Heritage Foundation, and The Daily Signal, are quickly losing my support by turning on President Donald Trump and House Speaker Paul Ryan over the Republican leadership’s health care bill.

I am not a legislative guru, but I do understand that the enemy of a good plan is to hold out for the perfect plan. The American Health Care Act was not a clean repeal of Obamacare, but it was what could be passed within the rules that control the scheduling and procedures of both chambers, the House and the Senate.

Additionally, it looked to me that Trump and Ryan offered all that was possible to the bill, and the House Freedom Caucus still refused to compromise—with their own party, for goodness sake. I am very disappointed.

I am as conservative as they come, but Heritage and the folks of the Freedom Caucus are obstructing the chance for conservatives to govern.—Roger Rudd

Dear Daily Signal: I am a loyal voter for President Trump. Because of that, I am very worried that his administration’s declaring “war” on the House Freedom Caucus or the Congress in general will paralyze his potential.

How can we convince our president to work with and not against the GOP majority in both houses, including the patriots of the Freedom Caucus? —Hal Miner

A Day Without Men

Dear Daily Signal: OK, if it’s so revealing to have a Day Without Women, let’s try a Day Without Men (“‘A Day Without a Woman’ Strike Promotes Idea of Women as Helpless”).  Let’s see what happens when citizens need the police, the fire department, the military, and a thousand common, everyday needs filled.

The local plumber, carpenter, electrician. Air conditioning service, garbage collection, highway construction and maintenance. And on and on and on. The greatest deficit in America today is old-fashioned common sense.—Jerry J.

Our Bodies, Our Lives

Dear Daily Signal: Amazing premise that we “own” our bodies, Walter Williams (“Are You Really Pro-Liberty? Here Are a Few Tests”)! How did we get to “own” them? We did not buy them, correct? They were given to us by something that we cannot describe or understand fully.

Mr. Williams might be talking in his commentary about our “lives,” which would be a better analogy, except that we were taught how to live by our parents. They were taught by those before them, and so on back about a couple of million years or so, correct?

How far back do we go in choosing a particular way of living? Only 30 years? 50? 100? 500? 2000? There are many examples throughout history that seem to have worked much better, and many that have worked much worse, than today’s lifestyle. Maybe Mr. Williams could compare a few of the good ones and some of the bad ones for us, so we could make an informed decision for ourselves.

Also, much of what I want in life cannot be bought, in my opinion. I would like to hear what Mr. Williams thinks about those things that cannot be bought.—Barry Benjamin

Great job. The Republicans better stand up to the Democrats and get Neil Gorsuch onto the Supreme Court. Now. Don’t let them delay any longer, as we need a positive vote on issues.—Audrey Lauer

Your Morning Bell emails have an unexpected pleasant twist to them. You actually have an email address for people to submit comments and a phone number where you can be contacted.—Paul Saucier

My compliments. You are doing great with your reports every day.—Ingrid Dohler, Esko, Minn.

I get lots of emails on political news, but your Morning Bell is the most concise and informative. I like the headlines so I can read more if I have time.—Carolyn Gilbertson

Great job. I appreciate the work that you do to provide real news reports. I depend on The Daily Signal for true and accurate information.—Tommy Wilson, Lilburn, Ga.

Awesome. Signed a friend up and plan on becoming a donor. Keep up the good work, and thank you for helping save our country.—Madelyn Vanacore, Sterling, Conn.