She Never Joined a Union. But Union Fees Got Deducted From Her Paycheck. 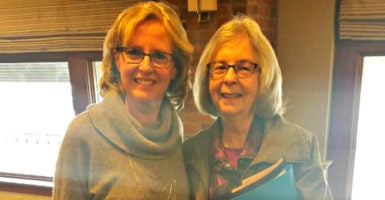 ST. PAUL, Minn.—Patricia Johansen has worked as a home caregiver for her two special-needs grandchildren for about 10 years.

Since she never agreed to join the union that represents such Medicaid-eligible caregivers in Minnesota, Johansen was surprised to discover that union dues had been deducted from her benefit check for about four months.

In an affidavit, the Fergus Falls resident says she is convinced the union, SEIU Healthcare Minnesota, forged her signature so it could start deducting the dues.

Johansen’s story is one reason a state lawmaker is scheduling a hearing where she expects the head of the state’s labor relations agency, a political appointee of Gov. Mark Dayton, to explain how SEIU Healthcare Minnesota won a unionization election—and why it should continue to represent the home caregivers. State Rep. Marion O’Neill, chairman of the Subcommittee on Employee Relations, told The Daily Signal that she wants the Dayton appointee to appear before the joint panel of the Minnesota House and Senate to address evidence of “fraudulent signatures, nonexistent voters, and ballot tampering” in a 2014 unionization election.

Johansen’s experience is one such discrepancy.

“We are going to have a full, robust hearing on how this process happened and have the personal care assistants come forward to talk about their experiences, and to talk about how it came to be that union dues were taken out of their paycheck without their knowledge or permission,” O’Neill, a Republican from Buffalo, said in an interview with The Daily Signal.

The SEIU affiliate collects $4 million to $5 million in annual dues from the Medicaid benefits paid to what Minnesota calls personal care assistants, a lawyer representing them estimates.

The state government considers residents who care for chronically ill or disabled relatives at home to be personal care assistants who are able to receive Medicaid benefits for providing that care.

As The Daily Signal previously reported, a relatively small number of Minnesota’s 27,000 eligible personal care assistants voted in favor of an affiliate of Service Employees International Union, or SEIU, becoming their representative in collective bargaining.

Now personal care assistants such as Johansen have banded together in an effort to set a new election to decertify SEIU Healthcare Minnesota, in part because of what their lawyers describe as questionable tactics and the evidence of fraud.

The Minnesota Bureau of Mediation Services, a state agency that describes itself as promoting “stable and constructive labor-management relations,” has denied the caregivers’ petition for a new election.

O’Neill wants Commissioner Josh Tilsen, appointed in 2011 by Dayton, a Democrat, to lead the bureau, to explain its pro-SEIU actions so far.

Johansen, 76, told The Daily Signal that, since she doesn’t use a computer, it wasn’t until after her son-in-law checked her account online that she realized the union already had been deducting dues for at least four months in 2015 without her awareness.

When Johansen contacted SEIU, she says, officials told her that they had her signature.

In her affidavit, a copy of which The Daily Signal obtained, Johansen says she “never signed any election authorization, SEIU membership, or dues deduction authorization card” for any union representative who came to her residence.

SEIU officials agreed to mail her a copy of the signature, Johansen told The Daily Signal, and it clearly wasn’t hers:

I’m left-handed, and the signature didn’t look anything like my real signature. The union asked me to send back a legal copy of my signature and get it notarized, which I did. I then got a letter back saying they would refund my dues. Patricia Johansen sent this notarized copy of her signature to SEIU Healthcare Minnesota to convince union officials she didn’t agree to join.

All 27,000 were eligible to vote in the 2014 election held by mail-in ballot, which asked whether they wanted to join SEIU Healthcare Minnesota and pay union dues. Of 5,849 PCAs who participated, 3,543 voted yes and 2,306 voted no, according to the Bureau of Mediation Services.

This means the votes of 13 percent of the state’s eligible PCAs unionized all 27,000. Under Minnesota law, SEIU needed only a majority of those who mailed in a ballot to vote yes.

Several PCAs who spoke with The Daily Signal in St. Paul earlier this month, however, said they didn’t receive a ballot in the mail.

Others, like Johansen, said dues were deducted from their Medicaid-funded paychecks even though they never joined the union or signed a form calling for the unionization election.

The Daily Signal has copies of 11 signed affidavits spelling out such allegations from personal care assistants in Minnesota, as well as canvassers who volunteered to collect signatures in the petition drive to decertify SEIU.

Using lists of personal care assistants and their addresses supplied by Tilsen’s agency, the volunteers say, they have encountered multiple nonexistent addresses as well as addresses where no resident was a PCA or the PCA listed no longer lives.

The Daily Signal on multiple occasions requested comment from a spokesman for SEIU Healthcare on the fraud allegations, the union’s actions, and other details, but has not received a response.

The Daily Signal also sought comment from Tilsen as well as Dayton or his staff, but has not received a response.

In the 2010 and 2014 election cycles, Dayton received a total of $13,500 from SEIU and $17,500 from the American Federation of State, County and Municipal Employees, or AFSCME, according to public records available at FollowtheMoney.org.

In 2013, the governor signed into law a bill that, without Republican support, classified personal care assistants as public employees for the purposes of collective bargaining.

At the time, unlike now, Democrats were the majority in the Legislature. The next year, SEIU held the mail-in election to unionize PCAs.

The agency stipulates that signatures must be collected from 30 percent of the 27,000 personal care assistants before an election may be held either to approve or decertify SEIU. This means organizers of the new petition drive must collect 9,000 signatures.

Douglas Seaton, a Minneapolis lawyer pursuing litigation against the Dayton administration on behalf of seven personal care assistants, recruited volunteers to collect enough signatures to trigger a decertification election. Seaton’s plaintiffs and the volunteers are part of a coalition called Minnesota Personal Care Assistants, or MNPCA, that seeks to decertify SEIU Healthcare Minnesota.

Matt Patterson, executive director of the Center for Worker Freedom, a Washington-based affiliate of Americans for Tax Reform, joined the effort.

“Here’s what’s fishy to us,” Patterson said at a March 4 press conference in St. Paul attended by Johansen and other personal care assistants. “If the union was able to prove 9,000 PCAs wanted an election and had this 30 percent support, then why did only about 5,000 people vote, and from that figure why did only about 3,000 vote for the union? We’ve been asking to see these records.”

As of this week, Seaton and Patterson had collected more than 6,500 signatures from PCAs who support a new election. That’s more than the total who voted in the 2014 unionization election, and about twice the number who voted in favor of SEIU.

O’Neill told The Daily Signal that she expects Tilsen to produce relevant documents.

“I want to see all of the signed cards they collected [from PCAs] in order to hold the election, and I want documentation for them to prove how many ballots they actually sent out,” the state lawmaker said, referring to Tilsen’s agency. “They are required to send out ballots to all 27,000 personal care assistants.”

In her affidavit, Johansen says Phillip Cryan, executive director of SEIU Healthcare Minnesota, wrote her that the union’s own investigation into the forgery of her signature turned out to be “inconclusive.” The letter from SEIU official Phillip Cryan to Patricia Johansen.

But Cryan also “said he could see the difference in the signatures and would refund the dues,” according to Johansen’s affidavit.

He informed Johansen that SEIU was “quite sure they knew who” was responsible, and that the person no longer was with the union.