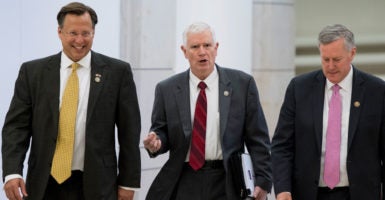 After Republicans pulled a bill to repeal and replace Obamacare last week, conservative members of the House Freedom Caucus are shrugging off criticism leveled at them by Republican colleagues—including from President Donald Trump himself.

In a Thursday morning tweet, Trump said the Freedom Caucus “will hurt the entire Republican agenda if they don’t get on the team,” and vowed to “fight” conservative members in 2018 midterm elections.

“The Freedom Caucus is trying to keep our promises,” Biggs said in an interview with The Daily Signal. “I don’t think going to Democrats, especially when they are trying to impeach the president, seems rational or realistic.”

About half of the more than 30 members of the Freedom Caucus joined at least 17 centrist Republicans in refusing to back the GOP leadership’s health care bill.

Centrists worried the bill imperiled too much of Obamacare, and conservatives said it did not go far enough.

Despite the bill’s failure, and signals that the White House wants to move on to other issues, Freedom Caucus members insist they want to work with Trump to craft a bill Republicans can unite around.

“The Freedom Caucus’ job is simple: to do what we promised the American people we’d do,” Rep. Mark Meadows, R-N.C., told The Daily Signal in a statement. “Our group has worked tirelessly to try to improve the [American Health Care Act] to ensure it will actually bring down costs for everyday Americans. We believe this is our job and our duty and not something we can let fall by the wayside and move on to the next policy battle. We’re open to working with any and everyone that is willing to work toward a solution.”

Freedom Caucus members say it would be a mistake for Trump to rely on Democrats and centrist Republicans to advance other parts of his agenda, including tax reform, and passing a short-term spending bill before April 28.

“There are competing factions in the White House and whoever got Trump’s ear on this one is just not serving him well,” said Rep. Dave Brat, R-Va., a Freedom Caucus member, in an interview with The Daily Signal. “The Democrats aren’t letting any of Trump’s appointments through, and there is no evidence the Democrats will show any taste for repealing Obamacare in any way, shape, or form.”

“The Freedom Caucus is basically the base of the Trump vote,” Brat added. “So whoever is advising him to go back to the old formula that has failed for year after year, that’s just terrible counsel.”

Rep. Raul Labrador, R-Idaho, a founding Freedom Caucus member, seconded that view, warning Trump via Twitter to “remember who your real friends are.”

@realDonaldTrump Freedom Caucus stood with u when others ran. Remember who your real friends are. We're trying to help u succeed.

Biggs insists he still believes Trump shares his conservative principles, and he is hopeful the president decides to follow them.

“The Freedom Caucus more than any group of Republicans in Congress are the ones who supported Trump to be president,” Biggs said. “Some in our group really went out on a limb and took it on the chin and supported Trump because he said he stood for the principle of repealing Obamacare, he stood for building a wall, he talked about a balanced budget, reforming taxes, everything we stand for.”

“Each person has their own level of capacity to accept or reject stress,” Biggs added. “I didn’t run for re-election in 2018. I ran for election in 2016 because I believed certain things, I made the case I would do things, and I have been out here busting my tail trying to do those things. If I can do those things, re-election will take care of itself.”

Nearly all of the Freedom Caucus members won their districts last fall by greater margins than Trump did.

Some Freedom Caucus lawmakers, however, believe the group demanded too much in the Obamacare debate, and is limiting its relevance moving forward unless it becomes more accommodating.

Rep. Ted Poe, R-Texas, left the caucus over the weekend, and Rep. Trent Franks, R-Ariz., in an interview with Politico, wondered if caucus members overplayed their hand.

“If we see the thing fail completely—nothing but shards around us—then we probably saw the Freedom Caucus overplay their hand … and I say that as a grateful member of the Freedom Caucus,” Franks told Politico.

More cautious members fear that Trump wields a powerful megaphone, and his base of supporters are mostly the Freedom Caucus’ own constituents, meaning conservative lawmakers could be blamed if Republicans fail to repeal and replace Obamacare.

They acknowledge the sensitivity of negotiations, because moving the legislation too far to the right could discourage centrist Republicans, especially those in the Senate who represent states that expanded Medicaid.

Trump again targeted the Freedom Caucus in a Thursday night tweet, this time singling out the group’s leaders.

If @RepMarkMeadows, @Jim_Jordan and @Raul_Labrador would get on board we would have both great healthcare and massive tax cuts & reform.

Yet other Freedom Caucus members embrace the targets on their backs, a hunted position they are used to occupying.

“Trump’s tweets reaffirm that the Freedom Caucus is having a major impact on public policy in Congress — that the Freedom Caucus is not a force to be ignored,” said Rep. Mo Brooks, R-Ala., in an interview with The Daily Signal. “This Twitterverse is the new Washington. I have zero worries about it. If you want me to vote for a piece of legislation, either persuade me it is good for America or change it so that it is good for America.”

Despite apparent cracks in the relationship, Brat maintains that Trump and the Freedom Caucus should form a natural alliance.

“The two themes Trump ran on is the forgotten man and draining the swamp,” Brat said. “The Freedom Caucus is all of that and that’s what we are moving forward on.”