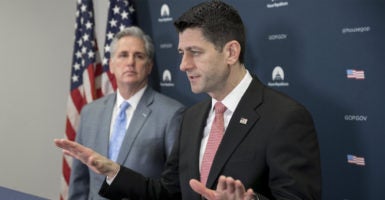 Just four days after House Speaker Paul Ryan declared Obamacare the “law of the land,” House Republicans say they’re moving forward with their plan to repeal and replace the health care law despite the divisions in their party on how to reform the health insurance market.

Ryan and members of his leadership team reaffirmed their support for unwinding the Affordable Care Act during a weekly press conference with reporters Tuesday, saying that their first failed attempt to replace Obamacare wouldn’t deter them from moving forward.

“We’re not going to retrench into our corners or put up dividing lines,” Ryan said after a meeting with Republican lawmakers. “There’s too much at stake to get bogged down in all of that.”

The renewed focus on repealing Obamacare came after Ryan decided to withdraw the House GOP’s health care bill Friday, a decision made after it became clear there wouldn’t be enough votes to pass it.

Republicans released their plan to repeal the health care law and implement parts of a replacement at the beginning of the month.

But the bill lacked a natural constituency.

After pulling the bill, Ryan told reporters “Obamacare is the law of the land” and stressed that Republicans would instead move on to other items on their agenda, like tax reform.

But by Tuesday morning, Republicans appeared to have regrouped, and Ryan stressed the GOP conference would continue to work toward gaining consensus on a replacement plan even as they tackle other legislative priorities.

“We’re going to get this right,” Ryan said, “and in the meantime, we’re going to do all the other work we came here to do.”

Any path forward on Obamacare’s replacement is going to require agreement between conservatives and centrist Republicans, factions of the party that opposed the House GOP’s health care bill for different reasons.

But the two groups appear willing to further engage in talks over health care reform.

According to The New York Times, the House Freedom Caucus and centrist Tuesday Group are engaging in talks with Stephen Bannon, President Donald Trump’s top strategist.

And even Ryan, who said Friday some Republicans in the House couldn’t get to “yes” on the bill, told reporters Tuesday that Republicans would “sit down and talk things out” until they compromise.

“We saw good overtures from those members from different parts of our conference to get there because we all share these goals, and we’re just going to have to figure out how to get it done,” the speaker said.

Ryan wouldn’t elaborate on any details of a new plan or on a timeline. But some conservatives are already plotting their own path.

Rep. Mo Brooks, R-Ala., filed a bill Friday that fully repeals Obamacare. Brooks, along with some conservatives, also may use a legislative tool that would force a floor vote on a bill dismantling the health care law.

The plan requires Brooks to collect 216 signatures on a discharge petition. Once that happens, and after the legislation has remained in committee for 30 days, the lower chamber would be forced to vote on the bill.

“We will find out who is truly for repeal of Obamacare and who is not,” Brooks told reporters.