George Soros Co-Opted Millions in US Taxpayer Dollars. Why Rex Tillerson Is the Man to Fix It. 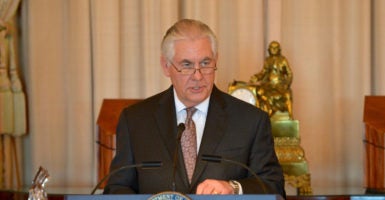 Six senators recently sent a letter to Secretary of State Rex Tillerson, asking him to investigate the numerous grants given over many years by the State Department and USAID to groups funded by left-wing billionaire George Soros. (Photo: State Department/Sipa USA/Newscom)

The influence of George Soros and his Open Society Foundations on U.S. foreign policy is the subject of an alert issued by members of the Senate.

Six senators recently sent a letter to Secretary of State Rex Tillerson, asking him to investigate the numerous grants given over many years by the State Department and its subsidiary, the U.S. Agency for International Development, to groups funded by the left-wing billionaire.

The Soros Open Society Foundations stands accused of fomenting trouble for the governments of some U.S. allies and even interfering in their electoral process.

A similar letter was sent by a group of House Republicans in February.

According to the legal watchdog group Judicial Watch, in the period between 2012 and 2015, left-wing groups directed by Soros were awarded $5 million for activities in Macedonia by USAID. A further $9.5 million has been earmarked for projects by Soros groups in Macedonia for the period 2016-2021.

These are pretty large amounts to devote to a country of just 2 million people.

>>>How Soros Money Is Corrupting Politics in This Small European Nation

Judicial Watch is trying to flesh out the extent of Soros’ influence, but getting to the bottom of the matter has proven more and more challenging.

“State Department figures have been tougher to come by,” Judicial Watch says in its blog. “And Judicial Watch has filed a Freedom of Information Act (FOIA) request for the numbers. Judicial Watch also fired off a public records request to USAID because the preliminary figures, obtained through various sources in both the U.S. and Macedonia, appear to be incomplete.”

The six senators’ letter calls on the secretary of state to “ … investigate all funds associated with promoting democracy and governance and review the programs, accounts, and multiplicity of U.S. entities involved in such activities.”

The letter continues, “We must … review how all our tax dollars are being utilized in order to halt activities that are fomenting political unrest, disrespecting national sovereignty and civil society, and ultimately undermine our attempts to build beneficial international relationships.”

Soros and his Open Society Foundations have burrowed deeply into the grant making process of USAID. Since the fall of the Iron Curtain, Soros has advanced an agenda of advancing far-left policy priorities overseas, including advocating an open borders approach to the migrant crisis in Europe.

>>>We Don’t Have to Choose Between Putin and George Soros

It wouldn’t be a stretch to say the Soros worldview likely bears little resemblance to that of the Trump administration.

This fact combined with emerging questions about why U.S. agencies and taxpayer dollars are funding Soros-backed policy priorities are both good reasons for the secretary of state to uncover what is happening right under his nose.