The Myth of an Unbiased Mainstream Media 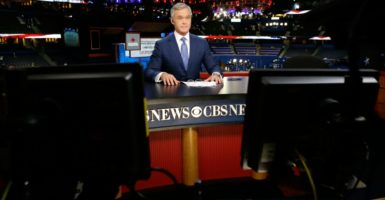 The attention on The Daily Signal’s Fred Lucas’ role as occasional White House pool reporter has made one thing very clear: For many, the illusion still remains that the mainstream media is unbiased.

“It’s concerning that news organizations with a clear and stated bias are serving as the eyes and ears of the White House press corps, regardless of their political leaning,”  Andrew Seaman, chair of the Society of Professional Journalists’ Ethics Committee and a Reuters reporter, told The Washington Post for an article questioning the appropriateness of Lucas’ role as a pool reporter. “In a perfect world, only news organizations with editorial independence and proven track records of reliability should be able to provide pool reports for the White House or any other government agency or official.”

Yet while many mainstream media outlets may not be “clear”—that is, transparent with their readers—about their perspective, there’s no doubt they indeed have a perspective.

First, let’s just look at the data about journalists:

When you keep those facts in mind, the actual behavior of the mainstream media starts to make more sense. Take this analysis by Silver–who got his start on the extremely liberal site Daily Kos—in a piece headlined “There Really Was a Liberal Media Bubble”:

The reporting was much more certain of [Hillary] Clinton’s chances than it should have been based on the polls. Much of The New York Times’ coverage, for instance, implied that Clinton’s odds were close to 100 percent. In an article on Oct. 17—more than three weeks before Election Day—they portrayed the race as being effectively over, the only question being whether Clinton should seek a landslide or instead assist down-ballot Democrats …

Or let’s look at CBS News anchor Scott Pelley, who has drawn media attention for his talk about President Donald Trump in his reports since the election. According to an Associated Press piece on Pelley, the anchor said on air, “The president’s real troubles today were not with the media, but with the facts.” Pelley also said: “Today we learned the length of the president’s fuse—28 days.”

Mark Feldstein, a journalism professor at the University of Maryland, told the Associated Press that Pelley’s remarks were “striking because it’s such a departure from the traditional norm of objectivity that serious news anchors have always gone for over the last few generations.”

Or what about the “quite the ruckus among reporters and editors” that ensued, per a Journal source to Politico, when Wall Street Journal Editor-in-Chief Gerry Baker raised concerns about his newspaper’s use of the words “Muslim-majority countries” to describe the countries targeted in Trump’s executive order?

The Journal source told Politico regarding Baker’s actions: “There is no editorial justification for his objection. For the EIC of a major American paper to go out of his way to whitewash this is unconscionable.”

No editorial justification? How about the fact that, as the Trump administration pointed out, over 40 Muslim-majority countries weren’t affected by the ban?

Whatever you think of its other pros and cons, to consider Trump’s executive order a Muslim ban—which is what is suggested when reporters call the countries Muslim-majority without very soon before or after acknowledging the security concerns about those countries—is not supported by the facts.

Or let’s consider what happened when a female former student of Neil Gorsuch’s claimed he had made controversial remarks about women and maternity leave. As my colleague Kelsey Harkness reported:

Multiple media outlets including NBC News, NPR, and Think Progress first reported on this allegation without any mention of [Jennifer] Sisk’s ties to Democrats. (Some news outlets, including NPR, updated their stories hours after publication.)

Or even look at what seems like a new surge of investigative energy coming from two of the nation’s top newspapers, The Washington Post and the New York Times. Poynter.org reported:

Both newspapers are also spending more to cover the White House. The Washington Post and The New York Times have doubled down on investigative journalism, with The Post staffing up for a quick-strike investigative team and The Times hiring Pulitzer Prize-winner Michael LaForgia and Livingston Award-winner Ellen Gabler from regional newspapers.

Beyond investigative reporting, both are coming up with new ways to cover the presidency—The Washington Post by launching a podcast dedicated to examining the bounds of President Trump’s authority and rejiggering its beats and The New York Times by pouring $5 million into examining the effect of the Trump White House on the broader world.

Great! The White House should face media scrutiny. But where was this enthusiasm when Obama was in office?

To be clear, I’m not saying that mainstream media journalists are intentionally slanting the news. Most of them seem to want to be objective.

However, the scarcity of conservatives in mainstream media newsrooms probably helps contribute to that bubble effect Silver mentioned: It’s easy to be unaware of your own assumptions and biases when they’re never or rarely challenged.

And it might indeed be better for our country if there were a substantial number of press outlets that were truly not perspective-driven at all. But the reality is that the mainstream media is not objective. Instead, it merely refuses to be honest about its own perspective.

The Washington Blade, which certainly has a perspective on LGBT rights, did a White House pool report this month. Liberal outlets such as Huffington Post and Talking Points Memo (as well as conservative outlets such as The Daily Caller) were also slated to do pool reports in March.

Perhaps one of the most telling signs of the media bias is that the alarm and consternation arise when an outlet on the right, not one on the left, does a pool press report—especially when there has been no criticism of Lucas’ actual pool reports that I’m aware of.