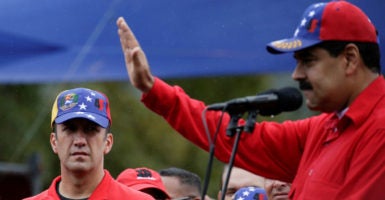 Gabriela Anciola is a member of the Young Leader's Foundation at The Heritage Foundation.

Not too long ago, oil reserves and natural resources made Venezuela the richest country in South America.

Maduro has recently handed over absolute control of all food imports to the military, allowing it to manage all of the food rationing in the country.

However, instead of reaching the thousands who are starving, the military officials are food trafficking and making an illicit business out of it.

This rampant corruption by the military has stimulated the food black markets and profiting from the sales of items that are in most demand.

The military that has sworn to protect the nation and defend its citizens is pocketing all of the wealth and food rations while the rest of the nation is struggling to survive.

The results are clear for all to see.

Food is so scarce that adults are losing on average 19 pounds a year from sacrificing meals and feeding their kids instead.

According to the Venezuela Teacher’s Federation, 40 percent of teachers skip class and wait up to nine hours a day in food lines hoping to get basic food staples like flour and eggs.

A lot of the time, parents keep their kids at home so they don’t faint from lack of food, or in other cases to prevent them getting more of an appetite from running around and playing.

Under these extreme conditions, students are being robbed of an education—and more importantly, a chance at a better life.

The crisis isn’t confined to one region of Venezuela either. It plagues the entire country.

People are starved and malnourished. There has been a significant spike in the mortality rate and previously eradicated diseases are fighting to return.

Malaria is one of many diseases and ailments that are on a sharp rise due to the scarcity of clean water and the scanty access to personal hygiene products.

The health care system in Venezuela is also in deep crisis. Thousands of patients do not have access to essential medical treatment, and many more have to be put on a waitlist for potentially life-saving surgery due to the lack of basic supplies and medical shortages.

According to the World Health Organization, 76 percent of public hospitals lack basic medicines and supplies that doctors say should exist in any functioning hospital.

Women are choosing to get sterilized in fear of facing the hardship of becoming pregnant and not having the adequate supplements and medical attention for a baby.

What is the government doing about it?

Maduro denies that there is a humanitarian crisis in Venezuela and actively suppresses and criminalizes internal opposition.

It is time for countries that stand for freedom and democracy to become more active and aware of the appalling circumstances in Venezuela.

The Maduro regime continues to preserve immunity for its top leaders, launders money, and has complete control over all of the media, medicine, and food in the country, while depriving its people of basic necessities.

If no one steps in to stop the humanitarian crisis and human rights abuses in Venezuela, there will be further deteriorating implications not only those already suffering within the country, but to many in the region and bordering nations.