We Hear You: ‘Elitist Media Believe Themselves Superior’ 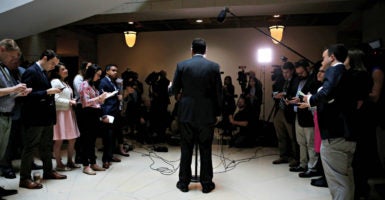 Reporters surround Rep. Devin Nunes, chairman of the House Permanent Select Committee on Intelligence, during a March 24 briefing in the Capitol on alleged government surveillance of the Trump transition team after the election. (Photo: Jonathan Ernst/Reuters/Newscom)

Editor’s note: The pretensions of the “mainstream media” remain on the minds of our audience. Today’s collection of mail kicks off with those concerns. Got an urge to write us? See how below.—Ken McIntyre

Dear Daily Signal: The Washington Post’s attack on The Daily Signal’s participation in the White House press pool is an egregious confrontation that highlights the difference between elite and citizen journalism (“The Daily Signal Won’t Be Bullied by the Establishment Media“). The reason the elitist press wish to deny access to a non-elitist press: They fear they will lose their influence and power.

This power struggle between the two is nothing new or unusual, and we are hearing about it now because of President Trump’s battle with elite news sources, more often referred to as the “mainstream media.”  This attempt to deny non-elitist access to the White House press pool is part of their effort to retain relevance as readers abandon them in droves.

The mainstream media thinks it is above the rest of the White House press corps; and have no doubt, websites like The Daily Signal and Breitbart are in fact a part of the press corps, more so than Huffington Post.

The elitist media believe themselves superior in ability, as well as having the greatest power and influence on the public. But the mainstream media for the most part are nothing more than propagandists for the Democrat Party and stooges for the elite corporations that own their franchises; we citizen journalists are more often of an independent, libertarian, or conservative mind.

This disparity began at the founding of our nation.  The “mainstream media” of 1770 were newspapers and magazines that wholeheartedly supported King George III of England. There were many reasons, not the least of which was that if they did not, they would be shut down, their property confiscated, and the owners imprisoned. Most, however, were willing partners of the king and the British elite, thinking themselves as elitist too—very much like today’s mainstream media.

With the homogeneous prattle among the mainstream media of 1775, the American colonists would have gone about their daily lives not knowing of events such as the Boston Massacre, the “tea party” held later in Boston Harbor, the depredations against citizens on a daily basis, or any of the other heinous acts that led to the Revolution.

Providing the information necessary to inform and inflame the colonists into revolt against the British elites was left to citizen journalists such as Samuel Adams, Thomas Paine, and Benjamin Franklin. Their fiery rhetoric aroused emotions into action.  Without these men and women who defied British laws by writing words against the king, and had the audacity to post them, our nation never would have been born.

Our Founding Fathers understood the importance of the citizen journalist, empowering anyone with an inkwell and a quill to draft letters, pamphlets, and flyers in opposition to our new government. In fact, they considered this so important that it became a part of the First Amendment to the newly ratified Constitution.

Joseph Ragonese describes himself as a veteran, retired police officer, businessman, journalist, and history buff. He publishes a newspaper for senior citizens and is the author of a novel about nuclear terrorism called “The Sword of Mohammad.”

Thankful for the Excellent Reporting

Dear Daily Signal: I have been a Daily Signal reader from its inception (“The Daily Signal Won’t Be Bullied by the Establishment Media“). It is one of my main news sources, as the “mainstream media” is not trustworthy. I for one am thankful for the excellent news reporting. Keep up the good work. We’re here, we’re reading.—Sherry Eaton

It Helps to Know Who Owns What

Dear Daily Signal: Thank you for Genevieve Wood’s commentary on the mainstream news media (“Why the Establishment Media Finds Itself on Shaky Ground“). I love The Heritage Foundation and The Daily Signal. It helps to know who owns what news station and so on.

The political world is hard for me to understand, but The Daily Signal helps me. I trust it. I feel The Daily Signal gives me the truth and supports my values as an American and a Catholic. God bless Genevieve Wood  and all who work with her.—Fran Giardinelli

Reason for That 60 Percent Drop

Dear Daily Signal: Great article by Genevieve Wood. You can see why there has been a 60 percent drop in the number of people working for “mainstream” newspapers (“Why the Establishment Media Finds Itself on Shaky Ground“). For one, I canceled my Wall Street Journal subscription, and that was after 26 solid years.

I told them I can no longer keep reading totally biased articles that are not in the editorials section. The only writers who are not left-wing biased there are Bill McGurn and Kim Strassel. I read The Daily Signal and Washington Free Beacon every day. Thank you for your outstanding work.—Connie Pohlman, New Braunfels, Texas

They Still Don’t Get It

Dear Daily Signal: Thank you for keeping us informed. I do rely on you and other conservative, online news sources to keep track of what’s going on in our world. I can’t stomach watching “mainstream” news feeds anymore because they are so biased.  They are constantly making fun of President Trump and ridiculing conservatives and their issues. All they do is spew the liberal talking points for the day, talking to each other instead of the public at large.

I’m tired of their unfounded attacks and smoke and mirrors. I firmly believe in the free press, but I also think there should be a way of reining in some of these  journalists who churn out garbage without vetting their sources.—Ruby Bickford

Dear Daily Signal: Your coverage of government compulsion of Americans to provide their talents in promoting something that runs against their beliefs illustrates the destruction of religion and its public expression in the last hundred years—largely through the collectivist courts perverting the meaning of the First Amendment.

The ruling elites have made secularism the new state-sponsored religion. The religious institutions themselves have become secular, repudiating some of their bedrock beliefs regarding abortion, homosexuality, and so on.

As John Adams was quoted saying, our form of government (defined by the Declaration of Independence and the Constitution) was meant for people with religious and moral anchors.  We now have relativistic morality, and have abandoned permanency of morality.—Art Gopalan

The Road to Failure on Health Care

Dear Daily Signal: I have been a consistent supporter of the Republican Party and the conservative agenda. The concern I have is we are going down the ideologue road to failure on health care (“Paul Ryan Admits Obamacare Replacement Plan Needs Changes“).  I feel we will go full “Thelma and Louise,” waving a puritanical flag as the car goes driving off the cliff, expending political capital along the way.

We need to advance whatever we can on health care that tilts the needle to the right, and move on to reforming the tax system, rebuilding the military, and bringing sanity to our budget.—John Fair, USAF (ret.), Mt. Pleasant, S.C.

Dear Daily Signal: If the House, Senate, and President Trump simply approved the 2015 Obamacare repeal bill, what would you expect the public’s reaction to be? Who would be held responsible for any negative consequences?—Peter Ansingh

That House IT Security Scandal

Dear Daily Signal: You folks, by publishing The Daily Caller News Foundation’s stories, are about the only ones reporting on the House IT security scandal (“House Hacking Suspects Could Read Every Email Dozens of Congressmen Sent and Received“). One of our Indiana representatives might be involved. It is unbelievable that other media outlets have not, will not, report on this. I commend you all. This is so important.—Mike Cloncs, Alexandria, Ind.

Dear Daily Signal: It is such a good feeling to turn to a news report such as The Daily Signal and not have to give a thought to the validity of the information posted.

I’m not a huge Heritage Foundation donor. However, I thoroughly enjoy the benefit of being a member of the Leaders Club, and I am proud to support such a group of individuals who are dedicated to the preservation of our great nation. Thank you very much for all you do for us.—Allen Powell

My mornings begin with your unfiltered, educated news. I simply grab my tablet from the nightstand and click. Now I’m informed before my feet hit the floor. Continue the accurate work, please.—Jeff M.

Fabulous and very thoughtful insights. I shall read daily. Appreciate all your efforts.—Corine Smith

The Daily Signal is the absolute best internet example of reporting the facts and shenanigans and the corruption in the swamp in Washington. Keep up the good work.—Floridana

I cannot contribute at this time, but I find your stories well written and relevant to the problems of the day. Keep it up.—Jane Carrell

Your news e-mail is the one I read, not just delete.—Eric Smith

Love your news. Keep it going. Make it available to more people.—John Rothenberger