Why I’m Voting Against the GOP Health Bill 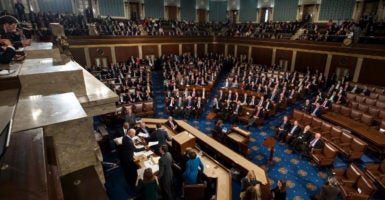 The House of Representatives is scheduled to vote Friday on the American Health Care Act. (Photo: Jim Lo Scalzo/EPA /Newscom)

From the moment I decided to run for Congress, I have repeatedly promised the residents of the East Valley that I would fight for a clean repeal of the Affordable Care Act, or Obamacare.

Since this law took effect in 2010, Americans have faced rising premiums, fewer choices, and decreasing quality of care.

My home state of Arizona has been hit hardest of all with premiums more than doubling. In fact, nearly all Arizonans have only one insurance option on the Obamacare marketplace, and even that option may soon disappear.

Every week, I hear firsthand from constituents about this law’s devastating effects. One family from Gilbert I spoke with said their monthly premiums are now higher than their mortgage and their annual deductible has increased to an astounding $7,000.

That is simply unaffordable for the average family. Americans like these are desperately looking to Congress for relief.

Unfortunately, the new health bill that was introduced—the American Health Care Act—merely amends the existing framework of Obamacare. Rather than representing a true reform package, this bill does not fully address funding for our high-risk population, nor does it lead to the lower premiums Americans are expecting for economic relief.

The bill also provides massive federal subsidies to make permanent an entitlement program that our grandchildren will pay for in the future. Many of the residents of the East Valley have already taken to calling it “Obamacare Lite”—and they are absolutely right.

The American Health Care Act has repeatedly been sold as merely the first step of a three-stage repeal and replace process that would look something like this:

This roadmap is fatally flawed.

The success of the partial repeal of Obamacare critically depends on the completion of the last two steps. But, unfortunately, the second step would instantly be met with intense litigation, and any executive action can be overturned by a future president.

Worse still, any health care reform bills passed as part of the third step would require 60 votes in the Senate—a near impossibility in the current political climate.

The tragedy is that all of our efforts should have been placed in step one from the very beginning. The current strategy leaves the most egregious parts of Obamacare in place, and I simply cannot vote in favor of the American Health Care Act.

>>>New Analysis: Obamacare Regulations Drove Up Premium Costs by Up to 68%

Over the past few weeks, I have worked in good faith with my colleagues to propose changes to the bill in line with the expectations of my district. Instead of halfway measures, I have consistently proposed a clean repeal of Obamacare that eliminates all of its regulations, mandates, subsidies, and taxes.

Additionally, I have advocated patient-centered, free-market health care reform that would allow individuals to shop for and purchase health insurance across state lines, block-grant Medicaid funds to states, encourage the development of high-risk sharing pools, and increase cost transparency for all consumers.

These measures would truly drive down costs and get the federal government out of the health insurance business, where it doesn’t belong in the first place. Americans expected Congress to provide real solutions to our nation’s health care challenges. They simply have no patience for half-hearted measures. We can—and we must—do better than the American Health Care Act.

I am committed to completely repealing Obamacare, and will not support anything less.