What House GOP Leadership Should Do Now on Obamacare Repeal 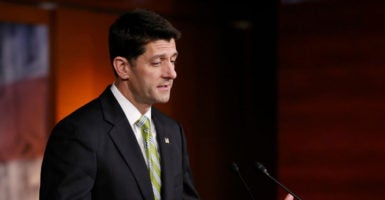 This afternoon, the House canceled a scheduled vote on the American Health Care Act—the House leadership bill to partially repeal Obamacare—once it became clear that there were not the votes for passage.

While the bill contained a number of provisions that were good conservative policies, a major reason it fell short was that too many members were concerned the bill did not go far enough in dismantling Obamacare’s regulatory architecture.

Indeed, the key to the case for repealing Obamacare is the need to undo the law’s regulatory takeover of private insurance and reverse its cost-increasing effects. That is not only a policy objective, but also a political imperative.

Voters elected candidates who pledged to repeal Obamacare because they understood that pledge to mean, first and foremost, a commitment to undo the cost-increasing mandates and regulations that Obamacare imposed on their private health insurance.

The best course now would be for House leadership to draft a new bill that takes as its starting point the repeal of those Obamacare provisions that dictate the benefits and design of private insurance plans, and which have driven up coverage costs.

Doing that would be a case of good policymaking for good politics.