What Georgia Could Teach Trump About How to Drain the Swamp 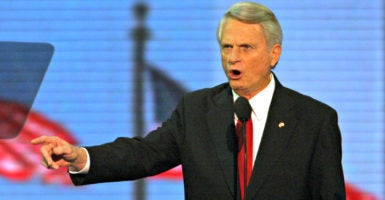 If the Trump administration wants to “dismantle the administrative state,” it might examine state-based efforts to tame the bureaucracy—the oldest being that of Georgia, where a Democratic governor moved state employees away from stringent civil service protections that blocked accountability.

“Who gets cut out of the picture when you protect the civil servant? The average citizen dealing with a bunch of bureaucrats,” Joe Tanner says.

After state Sen. Thurbert Baker, a Democrat, showed the two stacks on the Senate floor, the bill sailed to passage. The state Senate vote was 40-8, the House 141-35.

Tanner called this change transformative for his state. And he said he believes Georgia can be a model for changes in the federal civil service.

Tanner worked for four Democratic governors—starting with Jimmy Carter. He said President Donald Trump could have a unique chance to reform the federal workforce, considering the Republican president ran a campaign in part on government being too big and out of touch.

“This is a tremendous opportunity for the federal government, and Georgia can be a model,” Tanner told The Daily Signal. “That doesn’t necessarily mean they need to do it how we did it, but we could be a model.”

The Georgia law ensured all state employees hired after July 1, 1996, would be at-will employees, but grandfathered in civil service protections for all of the existing employees.

The “at-will” designation means employers may fire employees without going through a long appeals process, which public sector employees rely on.

The Georgia reform restructured promotion and based pay on performance rather than timelines.

A report on civil service reforms by the American Legislative Exchange Council, or ALEC, found:

By 2012, over 88 percent of Georgia state employees were working on an at-will basis, hires and pay had actually increased, as did communication between employees and supervisors. The result of Georgia’s reform was not a decimation of the civil service, but instead, a more flexible and responsive system that adapted as the needs of the agency changed over time.

The states of Arizona, Colorado, Florida, Indiana, Tennessee, Texas, and Wisconsin also passed some reforms for a more accountable public sector workforce, according to ALEC, which advocates conservative policy changes and model bills in state legislatures.

“The modern reform movements have focused their rhetoric on running government more like a business, which of course includes being able to fire employees at will or something close to it,” said the report, co-authored by Inez Feltscher Stepman, director of ALEC’s task force on education and the workforce, and her husband Jarrett Stepman, an editor at The Daily Signal.

Rep. Barry Loudermilk, R-Ga., has proposed a bill to make it easier to dismiss federal employees for misbehavior, which would move the federal rules closer to those of his home state.

The American Federation of Government Employees, the largest union of federal workers, said the Loudermilk proposal and others are part of Republicans’ larger agenda to eliminate the merit system. The union said in a Feb. 3 post:

Some proposals are clearly aimed at punishing nonsupporters and bringing back a patronage system abolished in the 1880s after President Garfield was assassinated by a disappointed office seeker. The civil service is clearly in danger of being compromised through political interference, which will make it a lot more difficult for federal employees to support and keep our communities safe.

The ALEC report calls for rolling back the Pendleton Act of 1883 and the Lloyd-LaFollette Act of 1912. The two laws established civil service protections and made it nearly impossible to fire employees, with the intent of depoliticizing public employees.

Because of such laws, the report says, today’s federal workers “are so little controlled by their political bosses that they attend workshops on how to oppose the priorities of their employer, the chief executive, as well as his Cabinet, openly consult with outgoing administrations to hinder incoming ones, attempt to embarrass the president by tweeting disparagingly from official and unofficial accounts, and leak classified information to the press.”

Since Trump came into office, conservatives have expressed concerns about rogue bureaucrats.

This Georgia reform would be tougher to implement at the federal level because of the sprawling bureaucracy.

But “that’s why the federal government needs it even more,” said Kelly McCutchen, president of the Georgia Public Policy Foundation, a conservative think tank in the state.

Fears about returning to a spoils system are unfounded, McCutchen stressed.

“It’s been in place for 20 years and we didn’t have a frenzy of politicized hirings and firings,” McCutchen told The Daily Signal.

Miller, the conservative Democrat who signed the reforms as Georgia governor, served a single term in the U.S. Senate from 2000 to 2005.

Frustrated with his party’s leftward drift, and after endorsing Republican George W. Bush for re-election as president, Miller did not seek another term. He is 85.