We Don’t Have to Choose Between Putin and George Soros 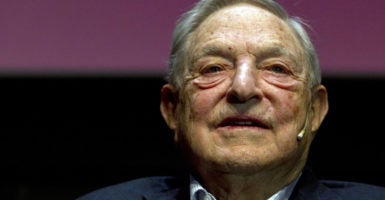 “The enemy of my enemy is my friend” is a proverb that has long, and apparently mistakenly, been attributed to Bedouins.

It’s unfair to them, as it contains the false-dichotomy fallacy. Sometimes the saying is correct, as when the Allies decided in World War II to side with Josef Stalin against Adolf Hitler. Other times, both options are equally bad.

This is, however, the way many people insist on reacting to George Soros and Russian President Vladimir Putin, the two men currently going toe-to-toe for control of much of the globe’s hearts and minds. You either side with one or with the other.

Or, if you attack one of them, it’s because you are in league with the other.

The latter seems to have been the approach that Politico’s Isaac Arnsdorf, Andrew Hanna, and Kenneth Vogel took with their contentious article, “GOP Takes Up Russia-Aligned Attack on Soros.”

The gist of the article (it is so one-sided, and even misleading in places, that I am reluctant to link to it) is that Republicans in Congress have been duped by Macedonian conservatives into doing Putin’s work for him.

This, to the Politico team, is “an accusation that’s being fomented and championed by Moscow.”

That an attack on Soros would be championed by Putin, there’s no doubt. The Kremlin leader is an opportunist who will enter any theater that beckons him by absurdly portraying himself as the guardian of Western values.

And inviting Putin to do just that is what Soros’ efforts in other countries often does.

But the notion that these senators’ action and that of several House members who have likewise asked the State Department for explanations as to why the U.S. Agency for International Development is teaming up with Soros around the world has been “fomented” by Putin, as Politico put it, is ludicrous.

In the case of little Macedonia (population 2 million, smaller than Queens, New York), that is outright erroneous.

>>>How Soros Money Is Corrupting Politics in Macedonia

Soros and the U.S. Embassy have thrown their support behind political parties contending against the conservative party VMRO, which, though imperfect, is very much pro-U.S. and pro-NATO.

To describe what Soros does as spending to install pro-Western governments is a very sympathetic way of putting it, as is the article’s description of him as a benign philanthropist.

Soros does throw his money around, which he can afford to do. Forbes puts his fortune at $25 billion, making him the world’s 22nd richest man.

He, for example, plunked $4.5 million between 2000 and 2014 into the egregiously biased Center for Public Integrity, where Vogel, one of the authors of the Politico piece, used to work.

But here’s another way to describe the world’s richest hedge funder: He spends his billions to legalize abortion in Ireland and Mexico, to decriminalize drugs in Indonesia, to promote a peace accord with narco-Marxist rebels in Colombia that the citizens of that country rejected in a referendum, to push for transgender rights in Guatemala, to portray Israel as a violator of human rights, and to legalize prostitution all over the world.

“On the surface, the vast number of groups and people he supports seem unrelated,” wrote Caroline Glick in The Jerusalem Post. “After all, what does climate change have to do with illegal African immigration to Israel? What does Occupy Wall Street have to do with Greek immigration policies?”

“They all work to weaken the ability of national and local authorities in Western democracies to uphold the laws and values of their nations and communities,” she concluded.

What this tacit or explicit U.S. support for liberal progressive policies around the world does is cannibalize moderate political support—and it invites Putin in as the political alternative, as is now happening in Macedonia.

If for lack of a conservative alternative, VMRO turns to Putin to counter this far-left agenda coming from outside the country, that is our fault—and Soros’. The Heritage Foundation takes a back seat to no one in making clear that Putin is an adversary that cannot be trusted. We have said so here, here, and here. I myself said so here.

Putin and Soros waste no opportunity trying to score points off each other.

In the last bloodletting a few months ago, a hacking group called DC Leaks, identified by the FBI as a Kremlin front group, hacked into the Open Society Foundations and published many private documents that revealed Soros’ plans on how to promote radicalism around the globe.

Included were his plans to reconfigure the U.S. political system through the U.S. Census Bureau and use Ireland as a model to change pro-life laws around the world.

The right response to this Soros-Putin mano-a-mano is not to pick your poison and choose one. It is, rather, to paraphrase Henry Kissinger’s quip on the Iran-Iraq war of the 1980s: “Let’s hope both sides can lose.”

Note: This article has been modified since publication.