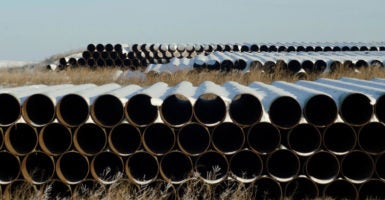 If you had a child when TransCanada first submitted its application to build the Keystone XL pipeline, he would be halfway through the first grade by now.

Seven years after TransCanada submitted its first permit application for the Keystone XL pipeline, the Trump administration has overcome the prevaricating defeat-by-delay strategy of the last administration.

The State Department’s decision to approve a permit for the pipeline at the U.S.-Canadian border comes as a result of President Donald Trump’s Jan. 24 executive order to expedite infrastructure projects.

Just days later, TransCanada resubmitted its application, and in February it suspended its lawsuit against the U.S. government for $15 billion in damages resulting from the drawn-out delay under President Barack Obama.

Today, the State Department, relying on extensive reports completed under the Obama administration, approved a permit.

What more can be said after seven years of talking an otherwise mundane pipeline to death?

The amount of time and resources spent debating one pipeline is stunning. The State Department has published five environmental reviews, Congress has voted 23 times, and The Heritage Foundation has written well over 100 blogs, op-eds, and policy papers on the Keystone XL pipeline.

Democrats and Republicans alike have voted in favor of a permit—in fact, approving the pipeline was one of the first orders of business last Congress, only to be met by an Obama veto.

Obama’s own State Department concluded that the pipeline was environmentally safe and would not contribute in any significant manner to global warming.

Instead of listening to the State Department officials, some of his own Cabinet members, and the unions supporting the project, Obama and Secretary of State John Kerry listened to the environmental activist organizations and shut it down.

Opponents of Keystone XL are still trotting out excuses, saying that the jobs impact will be minimal and Keystone may not be a viable project in an era of low oil prices.

While the permanent job tally will be small, the criticism dismisses the thousands of shovel-ready construction jobs building the northern half will create. In fact, the southern portion, which did not require Obama’s approval, created nearly 5,000 jobs.

Construction jobs by their nature are temporary. The 35-50 permanent jobs indicate how efficient Keystone XL is.

As to whether or not Keystone XL is still economically viable, that’s a business decision, not a government one.

Oil prices are long-term. Industry makes investment decisions looking decades into the future, not simply based on short-term projections.

Although it certainly is possible that low oil prices could keep Keystone XL from reaching its peak volume, oil prices could rise as quickly as they fell. Businesses are much better equipped and flexible to deal with changing economic circumstances than short-sighted politicians in Washington.

Approving a permit has nothing to do with supporting “big oil” or fighting global warming. It’s simply good energy, environment, and economic policy.

The Keystone XL pipeline is part of an extensive grid of energy infrastructure that helps fuel our economy, support our way of life, and open new opportunities. There are 2.4 million miles of pipeline crisscrossing the U.S., 72,000 miles of which are for crude oil.

Nearly every good and service Americans engage in—schools, hospitals, grocery stores, transportation, manufacturing, and so on—depend on affordable, reliable energy like that being transported through pipelines like the Keystone XL pipeline.

The fight over Keystone XL represents a larger problem for infrastructure (whether it is pipelines or transmissions) where regulators and politicians capitulate to the “Keep It in the Ground” movement.

An already onerous environmental review and permitting process is stretched longer by environmental activists tying projects up in courts.

It’s nice to see that the State Department’s approval of Keystone XL re-establishes some certainty and sanity to a permitting process that was hijacked by political pandering.

However, Congress and the Trump administration need to implement reform so that projects in the future are not held up for years in regulatory paralysis or through litigation.