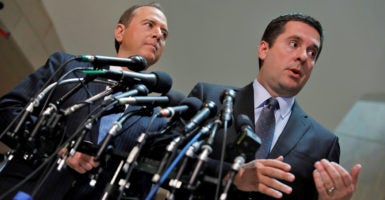 The chairman of the House intelligence panel acknowledged Wednesday that President Donald Trump and members of his team were likely under surveillance, at least incidentally, between Election Day and the presidential inauguration.

Nunes’ committee will investigate who knew what about the “surveillance activities” used against Trump and his associates.

“While there was not a physical wiretap of Trump Tower, I was concerned that other surveillance activities were used against President Trump and his associates,” the chairman said.

He added, “To be clear, none of this surveillance was related to Russia or any investigation of Russian activities or of the Trump team.”

Trump caused a political firestorm when he tweeted on March 4:

Terrible! Just found out that Obama had my "wires tapped" in Trump Tower just before the victory. Nothing found. This is McCarthyism!

Is it legal for a sitting President to be "wire tapping" a race for president prior to an election? Turned down by court earlier. A NEW LOW!

Trump and his aides have faced intense scrutiny for failing to provide specific evidence of such activity aside from disparate media reports.

A reporter asked Trump Wednesday, “Do you feel vindicated by Chairman Nunes coming over here?”

“I recently confirmed that, on numerous occasions, the intelligence community incidentally collected information about U.S. citizens involved in the Trump transition,” says @DevinNunes.

It’s unclear from the information made public by Nunes whether President Barack Obama directly played any role in the surveillance as Trump previously said.

When asked Wednesday if he could rule out the involvement of senior Obama administration officials, Nunes responded, “No, we cannot.”

Nunes has asked the FBI, National Security Agency, and the CIA to cooperate in helping the intelligence committee determine the answers to the following questions:

Sen. John McCain, R-Ariz., called the lack of cooperation with the Democrats on the House committee “very disturbing.”