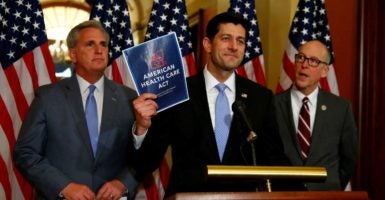 “The House of Representatives bill must include full repeal of the Obamacare insurance regulations, must permit interstate purchasing of health insurance and must expand health savings accounts,” the memo said.

The memo continued to say that the House health care legislation should not depend on what happens in the Senate.

“The House should not pre-emptively capitulate on these principles by making unwarranted assumptions about how the Senate will proceed,” the memo said.

According to the Conservative Action Project’s website, the organization “is designed to facilitate conservative leaders working together on behalf of common goals. Participants include the CEOs of more than 100 organizations representing all major elements of the conservative movement—economic, social, and national security.”

Some members of The Heritage Foundation also signed the memo, including Edwin Meese III and Becky Norton Dunlop, who both worked in the White House under President Ronald Reagan.

The memo is another blow for the GOP health care legislation that is already short of the 215 votes it needs to pass.

This announcement comes the same day that House Republican leaders postponed the afternoon vote for the health care bill, lacking adequate support to pass the bill, according to NBC News.

Members of the House Freedom Caucus have been some of the harshest conservative critics of the health care bill, called the American Health Care Act.

However, Freedom Caucus Chairman Mark Meadows, R.-N.C., told reporters after a meeting at the White House Thursday that while no deal was in place, they would be willing to keep negotiating.

“I would hope that we would continue to negotiate in good faith and hopefully get there. We’re certainly trying to get to yes,” Meadows said.