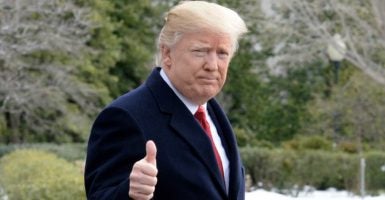 President Donald Trump has tapped a federal district judge from his list of potential Supreme Court picks to be his first nominee to a federal appellate court—putting Trump slightly behind President Barack Obama, but ahead of President George W. Bush in shaping the judiciary.

The White House announced Tuesday that Trump intended to nominate U.S. District Judge Amul R. Thapar to serve as a judge on the U.S. Court of Appeals for the 6th Circuit.

Thapar, son of Indian-American immigrants and a former federal prosecutor, now serves as a federal judge in the Eastern District of Kentucky. Bush appointed him in 2008.

The announcement for a nomination comes as Trump’s nominee for the Supreme Court, Neil Gorsuch, is going through his confirmation hearings in front of the Senate Judiciary Committee.

Appeals court judges can be nearly as important as Supreme Court judges since the high court is limited in the number of cases it accepts.

There are 19 appellate court vacancies across the United States that Trump could fill, and 96 on federal district courts, according to Elizabeth Slattery, a legal fellow at The Heritage Foundation.

“This is a great sign that President Trump takes lower courts seriously,” Slattery told The Daily Signal. “The last administration did not make lower court judges a priority, and that ended up being good for conservatives because it has left Trump with a lot of opportunities. There was a lot of thought that the president would wait until the Gorsuch nomination reached its conclusion.”

Given his position on the Trump campaign’s Supreme Court list of 21 names, this could be grooming Thapar for the Supreme Court, said Curt Levey, president of the Committee for Justice, a conservative legal group, and a senior legal fellow for FreedomWorks.

Bush’s first appeals court nomination did not happen until May 9, 2001, when he named Roger Gregory to the 4th U.S. Circuit Court of Appeals. That same month, Bush nominated Richard F. Cebull to serve as the judge for the U.S. District of Montana. Bush named a total of 61 appeals court judges that the Senate confirmed and filled a total of 263 vacancies on district courts.

Thapar began his legal career in private practice. He clerked for Judge S. Arthur Spiegel on the District Court for the Southern District of Ohio and then with Judge Nathaniel R. Jones of the U.S. Court of Appeals for the 6th Circuit, to which Trump has selected Thapar to serve on. Thapar received his bachelor’s degree from Boston College in 1991 and his Juris Doctor from the University of California, Berkeley.