This Harmful Housing Rule Deserves to Be Overturned by Congress 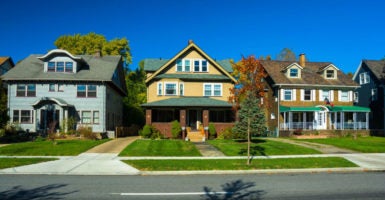 This rule establishes a duty for Fannie Mae and Freddie Mac, the two government-sponsored enterprises, to support a secondary market for certain mortgages—ones related to manufactured homes titled as real property or personal property, blanket loans for certain categories of manufactured housing communities, preserving the affordability of housing for renters and homebuyers, and housing in rural markets.

Despite the fact that the agency has now published the final rule in the Federal Register, the Congressional Review Act, passed in 1996, gives Congress expedited and simplified procedures to repeal rules finalized by federal agencies—including this very rule. For example, the Congressional Review Act removes the possibility of a Senate filibuster to delay a vote if certain requirements are met.

If both the House and Senate pass a “joint resolution of disapproval,” which is signed into law by the president, then a rule is invalidated and would preclude the Federal Housing Finance Agency from promulgating a new rule that is “substantially the same” as the one nullified.

>>>For more on the reach of the Congressional Review Act, see Paul Larkin’s article.

The Federal Housing Finance Agency’s final rule builds on the broader duty to serve regulatory apparatus in place since 1992, when Congress specified an affirmative obligation for Fannie Mae and Freddie Mac to provide affordable housing to households ranging from very low to moderate income.

Fannie Mae, Freddie Mac, and numerous federal affordable housing policies (among other regulations) were central to the unraveling of the housing market between 2007 and 2009.

In the wake of that downturn, Congress unwisely enacted a series of policies that expanded the federal government’s intrusion into the U.S. mortgage finance system.

The “duty to serve” concept for these government-sponsored enterprises was first implemented during the Clinton administration, and then expanded in the Housing and Economic Recovery Act of 2008.

The Federal Housing Finance Agency has continued to advance the notion that Fannie Mae and Freddie Mac have an “affirmative obligation” to promote credit redistribution in favor of so-called affordable housing for underserved groups.

Broadly, these policies are harmful because they encourage people with few assets to take on an enormous amount of debt.

The “duty to serve” regulation would further entrench the misguided direction for federal housing policy advanced by the Obama administration and the Federal Housing Finance Agency, and it undermines the private housing finance system.

Rather than allow private firms to competitively and efficiently allocate credit and capital, the “duty to serve” concept allows government bureaucrats to redistribute capital and issue high-risk credit to certain groups on the backs of federal taxpayers.

Indeed, the results of the last mortgage credit bubble, fueled by the federal government’s affordable housing policies, speak for themselves: millions of failed homeownership experiences for ordinary Americans, volatile home prices, hundreds of billions of dollars in bailout costs for federal taxpayers, and turmoil in financial markets impacted by the failed mortgages.

We need to avoid repeating the same mistakes. Congress should therefore seize this opportunity to block the Federal Housing Finance Agency’s “duty to serve” rule by approving a joint resolution of disapproval under the Congressional Review Act.