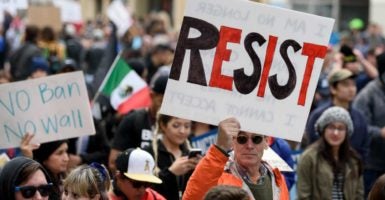 Rockville, Maryland, has been rocked by a brutal rape on a school campus allegedly committed by two illegal immigrants. (Photo: Ronen Tivony/Sipa USA/Newscom)

Rockville, Maryland, the city home to the recent immigrant high school rape scandal, is considering declaring itself a sanctuary city.

Although Rockville police have had a longstanding policy neither to question suspected illegal immigrants about their immigration status, or to cooperate with federal immigration authorities, the city is now considering the process of formalizing that informal standard by becoming a sanctuary city.

Carr forwarded the ordinance at a hearing March 6 overflowing with local residents, including those in favor of turning Rockville into an official sanctuary city, and those vehemently against.

But the discussion has now become much more complicated, as recently, two immigrants, Henry E. Sanchez from Guatemala, and Jose O. Montano from El Salvador, were charged Thursday for allegedly raping a 14-year-old girl at Rockville High School.

The girl told police that Montano pushed her into the boys’ bathroom and into a stall, at which point Sanchez joined him and the two took turns sexually assaulting her.

It’s unclear why Sanchez and Montano, 18 and 17 respectively, are allowed in the ninth grade at the high school and a spokeswoman for the school refused to explain the situation to The Washington Post.

What is clear, however, is that Sanchez has an “alien removal” case against him currently pending.

Montano is being charged as an adult, despite being a juvenile, because of the gravity of the allegations.

And, according to Montgomery County Assistant States Attorney Rebecca MacVittie, Sanchez is a “substantial flight risk.”

That both are a flight risk is precisely why the judge in the case said they must be held in custody without bond until their next court hearing. Montano’s hearing is set for March 31 and Sanchez’s is set for April 14.