FBI Director Confirms Investigation of Russia’s Meddling in US Election, Including Any Links to Trump Campaign 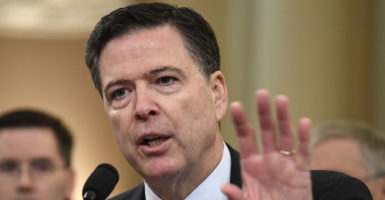 FBI Director James Comey told lawmakers of the House Intelligence Committee that the bureau since July has been investigating Russia's election activities, including possible connections to the Trump campaign. (Photo: Mike Theiler/UPI/Newscom)

For the first time, the director of the FBI publicly revealed Monday that the bureau is conducting a counterintelligence investigation of the Russian government’s efforts to interfere in the presidential election and whether there was any coordination between the Trump campaign and Moscow.

“I have been authorized by the Department of Justice to confirm that the FBI, as part of our counterintelligence mission, is investigating the Russian government’s efforts to interfere in the 2016 presidential election and that includes investigating the nature of any links between individuals associated with the Trump campaign and the Russian government and whether there was any coordination between the campaign and Russia’s efforts,” FBI Director James Comey said during testimony before the House Intelligence Committee.

“As with any counterintelligence investigation, this will also include an assessment of whether any crimes were committed.”

Comey said the bureau decided to go against convention and publicize the existence of an ongoing FBI investigation because it considers the Russia probe to be an “unusual circumstance” that “is in the public interest.”

Comey and National Security Agency Director Michael Rogers, who also testified before the House committee, said they stand by a report the intelligence community issued in January that concluded with “high confidence” that “Russian President Vladimir Putin ordered an influence campaign in 2016 aimed at the U.S presidential election.”

The report said the Russians had deployed computer hackers to undermine the presidential campaign, with the goal of harming Democratic candidate Hillary Clinton while boosting the candidacy of Republican nominee Donald Trump.

“Putin hated Clinton so much that the flip side is he had a clear preference for the person she was running against,” Comey said at Monday’s hearing.

The House and Senate intelligence committees are conducting separate investigations into Russia’s actions during the presidential campaign.

Comey and Rogers confirmed the Russian effort did not succeed in affecting actual vote tallies.

The White House sought to focus on this detail, although Comey and Rogers acknowledged they could not determine whether Russia’s actions had any influence on voters’ decisions.

The NSA and FBI tell Congress that Russia did not influence electoral process. pic.twitter.com/d9HqkxYBt5

“Following this testimony it’s clear that nothing has changed,” White House press secretary Sean Spicer said during his daily press briefing Monday. “The president is happy that they are pursuing the facts in this.”

Spicer predicted the FBI probe will “vindicate” the Trump team.

He referred to statements by former acting CIA Director Michael Morell and James Clapper, President Barack Obama’s director of national intelligence, that they have seen no evidence of collusion between Trump associates and Russia.

Comey said the FBI investigation into Russia’s actions, and possible ties between individuals associated with the Trump campaign and Moscow, began in July—months before Election Day.

The FBI director would not say whether investigators are probing the actions of Trump himself.

Nor would Comey say how long the FBI’s investigation may last.

The New York Times and other media organizations have reported that some of Trump’s associates were in repeated contact with Russian officials and others close to Putin during the presidential campaign.

Comey and Rogers also testified that their respective agencies have “no information” and “no evidence” to support Trump’s claims via Twitter that his predecessor, Obama, ordered surveillance of Trump Tower toward the end of the campaign.

“The answer is the same for the DOJ and all its components,” Comey said, emphasizing that “no one individual” in the U.S., including the president, can direct electronic surveillance without approval from the Foreign Intelligence Surveillance Court (FISA). “The department has no information that supports those tweets [by Trump].”

Comey declined to say whether any government officials requested an application for surveillance of Trump or any of his associates with the FISA court.

Republican lawmakers at Monday’s hearing mostly focused their questions on their concerns over a proliferation of government leaks of classified material that have angered the Trump administration.

>>>Trump Wants Justice Department to Investigate Leakers. How That Works.

Last month, Trump said he had directed the Department of Justice to open a criminal investigation into leaks, to find their source.

Comey on Monday did not confirm the existence of such an investigation. He and Rogers condemned the practice of leaking, noting that such unauthorized disclosures have been more frequent in recent months.

Rep. Trey Gowdy, R-S.C., asked Comey: “Unauthorized dissemination is a felony punishable by up to 10 years in federal prison?”

Gowdy alleged during the hearing that Obama administration officials were behind the leaks, which among other things, included classified intercepts of calls between Michael T. Flynn, Trump’s choice for national security adviser, and Sergey I. Kislyak, the Russian ambassador, weeks before Trump took office. Flynn resigned as national security adviser after the White House determined he had misled Vice President Mike Pence about the conversations.

Comey said he is particularly worried about “an unusually active” stream of recent leaks because, he said, the leakers are revealing incomplete intelligence.

“A lot of it is dead wrong,” Comey said. “Often times, [the leaked information] doesn’t come from people who know the secrets, but people who heard about it. That’s why the information is often wrong.”

As Republicans and Democrats on the Intelligence Committee took different approaches to their questioning, Comey and Rogers stressed the serious implications of Russia’s campaign to undermine Western democracies.

The intelligence leaders said they expect Russia to continue to try to meddle in upcoming European elections—including campaigns in France and Germany—and that Moscow could target the U.S. again.