How Neil Gorsuch’s Senate Confirmation Process Compares to Recent Ones 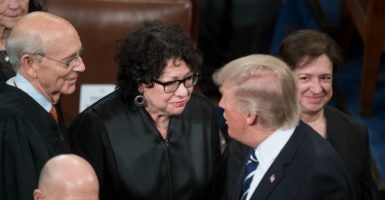 On Monday, the Senate Judiciary Committee will begin its hearing on the confirmation of Neil Gorsuch to be an associate justice of the Supreme Court. Senate Majority Leader Mitch McConnell is confident that the Senate will confirm Gorsuch before the Easter recess, which is set to begin April 10.

As Senate Democrats have scrambled to find reasons to object to Gorsuch, scores of people across the political spectrum have spoken out in support of the nominee. Thus, if Sen. Dianne Feinstein, ranking member of the Judiciary Committee, and other Democrats want to stop Gorsuch’s nomination, they will face an uphill battle during the hearings.

As the hearing starts, how has this process compared to other Supreme Court confirmations in recent years?

President George W. Bush’s first chance to make a Supreme Court nomination came in July 2005 when Justice Sandra Day O’Connor announced her intention to retire. This was the first vacancy on the court in over a decade. Bush nominated D.C. Circuit Judge John Roberts on July 19, 2005. While his nomination was pending, Chief Justice William Rehnquist, who had been battling thyroid cancer, died Sept. 3.

With Rehnquist’s death, Bush rethought his strategy for filling two vacancies on the Supreme Court. He decided to withdraw Roberts’ nomination to be an associate justice and announced him Sept. 5 as nominee for chief justice of the United States.

The Senate Judiciary Committee met Sept. 12-15 for Roberts’ confirmation hearing, and one week later, on Sept. 22, the committee voted 13-5, with three Democrats joining the Republicans, to send his nomination to the full Senate. The Senate voted to confirm Roberts on Sept. 29, 2005, just in time for him to join the court before the start of its 2005-2006 term the next week.

After deciding to nominate Roberts to be chief justice, Bush first tapped White House counsel Harriet Miers, a Texas lawyer who served as Bush’s personal lawyer before he became president, as the nominee for associate justice. He made the announcement Oct. 3.

As a result of a campaign by conservatives who wanted a nominee with a demonstrated conservative record and judicial experience, Miers withdrew her nomination weeks later and Bush announced his pick of 3rd Circuit Judge Samuel Alito on Oct. 31.

Alito’s hearing was not held until Jan. 9-13. Less than two weeks later, on Jan. 24, the Senate Judiciary Committee voted 10-8 to send him to the full Senate. Then-Sen. Barack Obama, D-Ill., and 23 other senators attempted to lead a filibuster to block Alito’s confirmation, but they were unsuccessful.

The Senate ultimately confirmed Alito by a vote of 58-42 on Jan. 31, 2006, with four Democrats joining the Republicans in confirming Alito.

As president, Obama later expressed regrets about this filibuster attempt when Senate Republicans signaled that they would not confirm a nominee for the vacancy left by Justice Antonin Scalia’s death Feb. 13, 2016, during Obama’s final year in office.

Obama’s first opportunity to pick a Supreme Court justice came when David Souter announced his retirement in 2009. Obama selected 2nd Circuit Judge Sonia Sotomayor, and he made the announcement on May 26, 2009. Sotomayor’s hearing was held July 13-16.

Highlights from the hearing included Republican senators grilling Sotomayor about her controversial views, including her claim that appellate courts “make policy” and that she believed “a wise Latina woman” would “reach a better conclusion than a white male” judge. Two weeks later, the Judiciary Committee voted 13-6 to send her to the full Senate.

Sen. Lindsey Graham, R-S.C., joined Democrats in that vote. Nine days later, on Aug. 6, 2009, the Senate voted to confirm Sotomayor by a vote of 68-31, with nine Republicans voting for her.

The following year, Obama had another chance to nominate a Supreme Court justice. He chose his solicitor general, Elena Kagan, to replace Justice John Paul Stevens, announcing the nomination on May 10, 2010.

Obama administration senior adviser David Axelrod recounted the story of Scalia’s approaching him at an event shortly after Souter announced he would retire in 2009. As Axelrod tells it, Scalia said, “I have no illusions that your man will nominate someone who shares my orientation … But I hope he sends us someone smart.”

Scalia continued, according to Axelrod: “Let me put a finer point on it … I hope he sends us Elena Kagan.” Scalia got his wish the second time around.

As the Obama administration came to a close, it seemed unlikely that another vacancy would occur on the Supreme Court—notwithstanding a not-so-subtle campaign to encourage Justice Ruth Bader Ginsburg to step down. Then on Feb. 13, 2016, the nation was stunned by the sudden death of Scalia.

The upcoming presidential election took on a new level of significance as Senate Republicans vowed to keep the seat open so that the next president, and by extension, the American people, could fill it. Nevertheless, Obama nominated Merrick Garland, chief judge of the D.C. Circuit. Senate Republicans, however, refused to allow the nomination to move forward.

Confirmation Process by the Numbers

That brings us to Neil Gorsuch. President Donald Trump announced his nomination on Jan. 31, so if Gorsuch is confirmed before the Easter recess, the process will have taken 10 weeks.

That’s slightly quicker than recent nominees but by no means out of the ordinary. Sotomayor clocked in at 11 weeks, Kagan and Alito both took 14 weeks, and Roberts was confirmed within 11 weeks from his first nomination.

Gorsuch enjoys perhaps the broadest bipartisan support of any nominee in recent history, and he is eminently qualified to join the Supreme Court. Though there has been some talk of Democrats attempting to mount a filibuster, these are rare for Supreme Court confirmations.

Thus, Gorsuch is likely to be confirmed on the timetable McConnell laid out. And Republicans appear prepared to play hardball if necessary—to limit Senate debate by invoking the nuclear option—to ensure Gorsuch is confirmed.