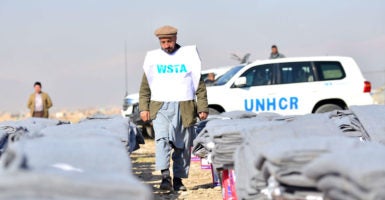 UNHCR, a United Nations agency that helps refugees, delivers materials to refugees in Afghanistan. The U.S. contributed more than $1.5 billion to the agency in fiscal 2016. (Photo: Dai He Xinhua News Agency/Newscom)

The Trump administration is promising to reconsider America’s relationship with the United Nations, with the White House aiming to limit U.S. financial contributions to the global body, and to enact reforms.

Trump, before he was inaugurated, signaled a harder-line approach when he sharply criticized a U.N. Security Council resolution condemning Israel’s construction of new settlements—a vote the Obama administration abstained from.

As president-elect, Trump questioned the effectiveness of the U.N., describing it as an outdated social club to which the U.S. contributes a disproportionate amount of money.

“The U.S. has used extreme tough love in the past, and the U.N. could use tough love right now,” said Mark Lagon, a former foreign policy adviser to the late Sen. Jesse Helms, R-N.C., who in the 1990s tried to withhold portions of U.S. dues to the U.N. in exchange for reforms.

“But what’s most important is being a constructive skeptic,” Lagon told The Daily Signal in an interview.

Lagon says he’s learned lessons from his experience with Helms, which ended with the North Carolina Republican’s partnering with then-Sen. Joe Biden D-Del., to pass legislation—signed by President Bill Clinton—restoring U.S. funding to the U.N. in exchange for a compromise on reforms.

“The U.S. is in a more convincing position to bring about reform if it fulfills its commitments,” Lagon said.

The Trump administration’s plan for the U.N. is still taking shape.

A total of 16 U.N. peacekeeping operations are underway throughout the globe. Ongoing missions—designed to help host countries transition from conflict to peace—include ones in Mali, South Sudan, and Darfur. Several of these missions already are winding down, such as those in Liberia, Haiti, and Kosovo.

“The reason the U.S. is authorizing all these peacekeeping missions is we don’t want to see slaughter in vulnerable places, and we also don’t want to keep U.S. military forces there,” said Stewart Patrick, the director of the program on International Institutions and Global Governance at the Council on Foreign Relations.

“But peacekeeping is hardly perfect,” Patrick added in an interview with The Daily Signal, noting that sexual abuse and exploitation by peacekeepers has been a persistent problem for the U.N.

“While the skinny budget didn’t provide a great deal of detail outlining where the Trump administration will target its specific cuts, the details that are provided are welcome,” said Brett Schaefer, an expert on the U.N. at The Heritage Foundation.

Congress passed legislation in 1994, signed into law by Clinton, capping contributions to peacekeeping at 25 percent. Congress, however, enacted an annual waiver during the Obama administration.

“It’s good to see the Trump administration seeking to comply with the law,” Schaefer said.

As mandated by treaties that Congress has ratified, assessed funding is obligatory on member states, and each nation pays a share proportionate to the size of its economy.

Member states, including the U.S., have sometimes fallen beyond on their assessed payments. Chronic nonpayment can lead to a suspension of voting rights.

The U.S. can adjust its assessed share only if the U.N. General Assembly agrees. Nikki Haley, the U.S. ambassador to the U.N., says she strives to “restore trust and value” to the international body. (Photo: Albin Lohr-Jones/ZUMA Press/Newscom)

“In broad strokes, it makes sense for the U.S. as the world’s largest economy to pay more than smaller economies, but it’s not unreasonable for the U.S. to try and encourage other countries to take a larger stake in the organization,” Schaefer said. “There needs to be a greater financial incentive to members to make sure their own dollars are being utilized well by the organization.”

Richard Gowan, who conducts research about the U.N. for the European Council on Foreign Relations and at New York University, says the cuts outlined in Trump’s budget proposal are expected and “relatively small.”

These voluntary programs include the children’s fund UNICEF, the World Food Program, and UNHCR, the U.N. refugee agency.

The Trump administration has not yet provided funding plans for these humanitarian agencies, but a leaked draft White House executive order—widely reported by media—would set up an “International Funding Accountability Committee” to evaluate the effectiveness of U.S. contributions to the different U.N. programs.

The order asks the new committee to make suggestions on how to cut voluntary funding by at least 40 percent.

Gowan, and U.N. advocates, says the U.S. should be wary of limiting its commitment to these agencies at a time of great need.

The U.N. reports that four countries—Somalia, South Sudan, Nigeria, and Yemen—are experiencing hunger crises. In 2016, the U.S. contributed about 28 percent of the foreign aid in those four countries, according to the ­U.N.

About 65 million people around the world have been forced from their homes, UNHCR says, including 21 million refugees, many fleeing war and poverty in the Middle East and Africa. The U.S. contributed more than $1.5 billion—of a nearly $4 billion budget—to the U.N. refugee agency in fiscal 2016. The money that the U.S. voluntarily contributes to the U.N. is a little over 0.1 percent of the total federal budget.

“My suspicion is we won’t see the U.S. cut humanitarian funding as extremely as some people fear, for the simple fact that spending is crisis driven,” Gowan told The Daily Signal in an interview. “It would be very difficult for the president to announce he cut off emergency food supplies for countries in famine. No president wants to be associated with photos of starving children.”

Gowan agreed with the other experts that it would be wise for the U.S. to evaluate its funding to U.N. programs. They say a “slash and burn” method to cutting U.S. contributions would be counterproductive.

Nikki Haley, the U.S. ambassador to the U.N., has disavowed such an approach, while vowing to “restore trust and value” to the international body because it “spends more money than it should.”

As part of its effort at reform, the Trump administration also threatens to withdraw from the U.N. Human Rights Council over longstanding concerns the body is too accommodating to countries with troubled human rights records, such as China and Saudi Arabia.

In a letter to human rights organizations, first reported by Foreign Policy, Secretary of State Rex Tillerson wrote that the U.S. is conditioning its membership on the Human Rights Council on whether the body undergoes “considerable reform.”

The George W. Bush administration refused to join the council in 2006, the year it was created, due to concerns about how members treated Israel. The Obama administration reversed that decision in 2009.

“The Human Rights Council is not perfect and can be unbelievably frustrating, and there’s still too many resolutions against Israel,” Patrick of the Council on Foreign Relations said. “But in my view, it’s better to be on it, because otherwise you are handing over influence to the Chinese, the Saudis, or other countries that don’t share our values.”

Yet concerns over anti-Israel bias at the U.N. continue.

A U.N. commission, in a report issued Wednesday, accused Israel of committing apartheid against Palestinians.

The leadership of the U.N. moved to distance itself from the report, published by the Economic and Social Commission for Western Asia, composed entirely of Arab member states.

“The report as it stands does not reflect the stance of the secretary general,” a spokesman for U.N. Secretary-General Antonio Guterres said at a news briefing.

Lagon, the former Helms staffer, says he was troubled by the report. But despite the body’s problems, he says, the U.S. is better off with using its influence to make the U.N. more effective.

“The U.N. isn’t only a faraway bureaucracy,” Lagon said. “When people say the U.N. is politicized, you shouldn’t be shocked because it’s a political body. What the U.S. needs to do is play the political game in the arena.”