Before Trump Called for Cuts in This Government Program, Obama Did 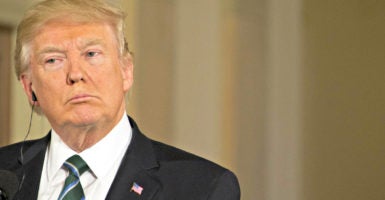 The president’s budget called for slashing funding for a block grant program primarily because it was difficult to determine whether it was getting the desired results.

That was President Barack Obama’s budget proposal for fiscal year 2012. It justified the 7.5 percent reduction in the Department of Housing and Urban Development’s Community Development Block Grant program by asserting:

While flexibility may be one strong characteristic of the CDBG program, the use of funds and how states and communities distribute their funds lead to resources spread across many activities, diverse constituencies, and geographies without clear or focused impact. This makes the demonstration of outcomes difficult to measure and evaluate.

(Correction: This story incorrectly stated the amount of Obama’s cut. The 2012 budget proposal cut the program by 7.5 percent to $3.7 billion.)

“It isn’t just us who wanted this on the chopping block. Obama didn’t say get rid of it, but he did say it’s difficult to measure the outcomes,” Tom Schatz, president of Citizens Against Government Waste, said in a phone interview with The Daily Signal.

“Eligibility is so broad, [a block grant] has gone to Greenwich, Connecticut, one of the richest cities in America,” Schatz said.

Democrats and media commentators almost immediately criticized the Trump move, however. A Washington Post analysis framed it as:

The program provides cities with money to address a range of community development needs such as affordable housing, rehabilitating homes in neighborhoods hardest hit by foreclosures, and preventing or eliminating slums and community blight. It also provides funding for Meals on Wheels, a national nonprofit that delivers food to homebound seniors.

Trump’s budget director says Meals on Wheels (which he wants to gut) is “not showing any results.”

However, Forbes reported that only 3.3 percent of funding for Meals on Wheels comes from the federal government.

Meanwhile, Reason, a libertarian magazine, reported that cities are routinely spending the block grants on recreational centers, auditoriums, and gardens rather than alleviating poverty.

As a private program, states could kick in funding for the meals program for seniors, said Robert Rector, a senior research fellow specializing in poverty at The Heritage Foundation, who called the Community Development Block Grant program a “slush fund for urban mayors.”

Rector said the program is “barely a rounding error” in $1.1 trillion spent annually in 80 federal programs for the poor. Local governments are also less likely to look at results if the money is coming from the federal government, he said.

“To pretend that this program or that program is just one step between the poor and destitution is ridiculous,” Rector told The Daily Signal in a phone interview.

The Trump budget proposal states that eliminating funding for the CDBG program would save $3 billion, and used language similar to Obama’s.

“The federal government has spent over $150 billion on this block grant since its inception in 1974, but the program is not well-targeted to the poorest populations and has not demonstrated results,” the Trump proposal says. “The budget devolves community and economic development activities to the state and local level, and redirects federal resources to other activities.”

The Government Accountability Office determined in a 2012 report that some funding isn’t targeted to the cities in most need: