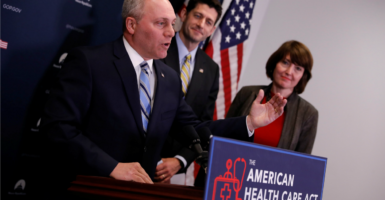 “When you look at where we are, there’s over 85 percent of this bill that has universal agreement among Republicans," House Majority Whip Steve Scalise said earlier this week. (Photo: Aaron P. Bernstein/Reuters/Newscom)

“When you look at where we are, there’s over 85 percent of this bill that has universal agreement among Republicans.”

That was the message from House Majority Whip Steve Scalise on Sunday. There is just one problem with that assertion: It ignores what is not in the bill.

Writing in The Wall Street Journal Thursday, Rep. Robert Pittenger states the obvious: he has “never voted for a perfect bill.” The North Carolina Republican then contends that the “American Health Care Act would be a huge conservative win” because it “finds as many victories as possible within current political realities should be our objective.”

That is what we heard from House Republicans in 2015 when they proclaimed a bill that left Obamacare’s massive Medicaid expansion and exchange subsidies intact was full repeal. It wasn’t true then and it certainly is not true now.

Pittenger is misleading his constituents by suggesting the American Health Care Act, which repeals Obamacare’s “actuarial value” rules and expands the law’s narrow “age bands,” is a conservative win even though it leaves in place so many other elements of Obamacare’s regulatory architecture. This is not a new issue.

Last August, Pittenger wrote for the Statesville Record & Landmark that “placing government as the arbiter for health insurance lacks the dynamics of open free markets.” He was right then, but it is telling that he chose not to even mention the law’s regulations or their impact on premiums in his Journal op-ed Thursday.

Obamacare’s web of mandates and regulations is the beating heart of this failed law, and if Republican lawmakers are too afraid to confront it they will have validated another one of President Ronald Reagan’s most famous quips: A government bureau is the nearest thing to eternal life we’ll ever see on this earth.

The bureau in question, the Department of Health and Human Services, was not created by Obamacare, but it was transformed by it, empowered by the law’s rules about benefit mandates, one-size-fits-all price controls, and arbitrary, duplicative federal veto power over state insurance rules with practically boundless discretion to shape one-sixth of the American economy.

Sure, discretion can be applied to loosen existing government burdens, as Health and Human Services Secretary Tom Price has pledged to do, but discretion cuts both ways. So long as Obamacare’s regulatory structure remains law, progressives will have the means at their disposal to destroy the private insurance market and replace it with one-size-fits-all government health care next time they are in the driver’s seat of our government.

Obamacare assumes that practically every decision made in one-sixth of our economy cannot be left to states, families, and individuals to make. Want cheaper coverage if you’re healthy? Can’t have that. Want “skinnier” coverage so you can bear more of your own expenses directly and reap savings as a cost-conscious consumer? Can’t have that. Would you be interested in an insurance company that placed a higher priority on improving its dreadful customer service experience? Can’t have that either.

What you can have under Obamacare: insurance more expensive than you need or want, that covers benefits you will never use, that forces you to pay far in excess of actuarial needs to subsidize others’ risks, and that may not even be available next year if federal regulators meddle too much in the your insurer’s pricing decisions.

Reagan famously said, “If I can get 70 or 80 percent of what it is I’m trying to get, yes, I’ll take that and then continue to try to get the rest in the future.” All of us agree with Reagan on that. But it is not the proposition before lawmakers right now. That is not what the American Health Care Act would deliver.

Obamacare’s architects did not believe in consumer-driven health care. They created a massive regulatory machine to force one-size-fits-all, comprehensive coverage on all Americans. Repeal of Obamacare and conservative health care reform is impossible so long as the law’s regulatory heart remains on the books.