Despite Support From Some Conservatives, Freedom Caucus Remains Opposed to Obamacare Plan 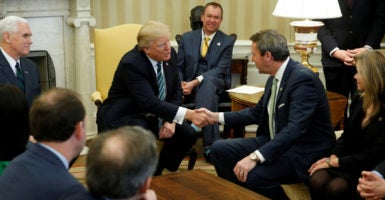 A group of conservative lawmakers came out in support of the House GOP’s Obamacare replacement plan Friday, but even with their backing, an influential bloc of conservatives remain opposed to the bill.

President Donald Trump held a meeting Friday in the Oval Office with members of the Republican Study Committee to discuss the health care bill, called the American Health Care Act. After the meeting, Trump told reporters he had successfully swayed the 13 members in attendance, some of whom arrived at the White House opposed to the legislation.

“These folks were mostly no’s yesterday, and now every single one is a yes,” the president said.

Trump said he agreed to “certain changes” to the bill dealing with the Medicaid expansion. Specifically, the president and members of the group agreed to give states the option to implement work requirements on those enrolled in Medicaid and the option to change Medicaid to a block grant program.

They also agreed to add a provision ensuring the tax credits implemented under the plan can’t be used to pay for abortions.

Members of House Republican leadership cheered the news out of the White House and are using the conservatives’ backing to boost support for the plan.

While the support from the 13 lawmakers may get the bill closer to the finish line, their backing isn’t guaranteed to get the bill to Trump’s desk.

Members of the conservative group are primarily concerned with lowering premiums for consumers, and they don’t believe the Obamacare proposal will do that.

Their fears were confirmed earlier this week after the nonpartisan Congressional Budget Office released its analysis of the bill.

The CBO, which works for Congress, projected that under the plan, premiums would increase 15 to 20 percent in 2018 and 2019.

Like the Freedom Caucus, centrist Republicans, too, have been skeptical about the legislation rolled out last week by House GOP leaders.

Those members are opposed to any attempts to sunset the Medicaid expansion before 2020 and hope to see changes to the refundable, age-based tax credits included in the bill.

Trump and Walker suggested that the support from the Republican Study Committee members was an indication that conservatives were coming around to the plan.

“You’re looking at some of the top conservatives in the House,” Walker told The Daily Signal’s Fred Lucas after the meeting. “We stand united today to move this forward for the American people, and we are very proud to do so.”

But the group’s support may not sway members of the Freedom Caucus, which was founded as an alternative to the Republican Study Committee.

Absolutely not true that conservatives have flipped to yes on the health care bill. It doesn't repeal Obamacare. It remains a disaster.

Republicans are expected to vote on the House GOP’s Obamacare replacement plan Thursday.

But in an interview on C-SPAN Friday, Meadows said he counted more than 40 House members who are opposed to the current bill. Those lawmakers, coupled with a bloc who are undecided, demonstrate why the bill needs to be changed, he said.

“There’s not the votes, not anywhere close to the votes,” Meadows said. “I can assure you that this bill needs to be changed, not only to pass the House, but certainly to pass the Senate as well.”