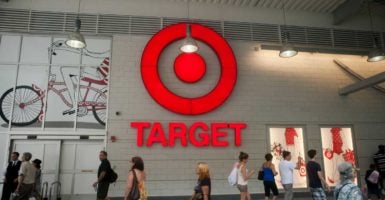 Retail giant Target waded into the national debate about whether bathrooms should be maintained as exclusively single-sex. (Photo: Richard B. Levine /Newscom) 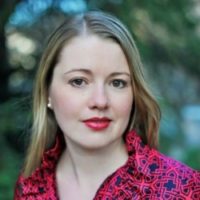 Ashley McGuire is a senior fellow with The Catholic Association and author of "Sex Scandal: The Drive to Abolish Male and Female."

In April 2016, retail giant Target waded into the raging national debate about whether bathrooms should be maintained as exclusively single-sex.

In a post on its blog titled “Continuing to Stand for Inclusivity,” the company announced, “we felt it was important to state our position” that in Target stores “team members and guests” are permitted “to use the restroom or fitting room facility that corresponds with their gender identity.”

No doubt the corporate executives behind the move were prepared for some blowback. But not quite at the decibel level that ensued. Target was in the headlines for weeks, its stock plunged by almost 10 percent the following month, and a boycott petition aimed at the retailer garnered over 1 million signatures.

Target insisted it was just stating a long-standing policy, and blamed everything but the boycott and the bad public relations. In one interview about declining sales, Target’s CEO actually blamed the weather.

‘An Inclusive Place to Shop’

Rather than address many customers’ apprehensions about its policy—specifically, how a company that boasts 1,800 stores would ensure that predators would not take advantage of a policy that permitted anyone to use the restroom of their choice—Target doubled down.

Its spokeswoman brushed off such concerns and reiterated that Target strives to be an “inclusive place to shop,” and that some Targets offer “single-stall, family restrooms for those who may be more comfortable with that option.”

When a Wall Street Journal story announcing Target’s move popped into my Facebook newsfeed, I had just returned from shopping there with my 4-year-old daughter. We were in the middle of the shoe aisle looking for sandals for her when she clutched my hand in panic with a familiar cry: “Mommy, potty! I have to go potty!”

We sprinted to the bathroom, making it without a moment to spare, not even a second to shut the stall door. My daughter relieved herself in plain view of about seven other women, all of whom smiled understandingly. After she went, I had to go, also with the door open, because my very mobile 18-month-old son was still in our cart, which would not fit in the stall. And there was no “single-stall, family [restroom] for those who may be more comfortable with that option.” I was grateful for our privacy.

To be specific, I was grateful for a place where my daughter and I could use the bathroom in a rather public way but still with the privacy afforded by being exclusively among members of our own sex.

The members of Target’s higher echelons do not seem to understand this everyday reality.

Moms like myself were mocked to kingdom come for registering even the slightest concern about what such a sweeping policy means for our privacy and safety. A wave of articles rushed to point out how silly it is to worry about an assault in the bathroom, forgetting the glaringly obvious reality that since the dawn of civilization, relieving oneself has overwhelmingly been practiced only among members of one’s own sex.

Until recently, bathrooms were one of the remaining places in society where men were not permitted to be with women and vice versa. Because of that clear barrier, even the sight of a man pushing open the door to a women’s restroom would raise eyebrows—and deter any would-be assailant with half a brain.

But all that is changing, as rules designed to protect privacy between the sexes are upended. Shortly after Target made its big announcement, a man recorded himself walking into his local Target and asserting his new right to use the women’s restroom. He did not state that he identifies as a woman; he simply said he wanted to make sure he had the right to use the women’s restroom. In the video, a manager assures him that he does, and when asked what the store will do if any women are upset, the manager says he will “take care of it.”

Apparently it was not long before Target’s lawyers got wind of the viral video; it was taken down almost immediately.

But the video was not an isolated incident. The following month, The New York Times ran the headline “Men Are Posting Videos of Themselves Testing Target’s New Bathroom Policy.” The piece reported, “Multiple videos have popped up on YouTube showing men confronting store managers about the policy and asking what would stop them from entering the women’s bathroom inside the store. In the videos, the managers can be seen (or heard, since some of the video is poorly shot) patiently saying that nothing would stop the men from using the women’s room.” Nothing.

This Report Is Real

Two weeks after Target announced that its women’s bathrooms were open to anyone whose “gender identity” led him there, police in a town in Texas issued a warrant for what was unmistakably a man who was spotted by a girl in a Super Target fitting room recording her as she undressed. The warrant charged him with “invasive visual recording.” A month later, the same thing happened at a Target in New Hampshire: A man was charged with filming women in the fitting room.

The following month, it happened again. In July, an Idaho paper reported that a “man dressed as a woman” was caught filming a young woman removing her clothes in the dressing room of a local Target. The predator was booked as a male under the name Shaun Smith, and according to a New York Times article on the incident, “Both the victim and her mother described the voyeur as a white male wearing a dress and blond wig.”

Nevertheless, the Idaho Post Register referred to Smith as “she,” reporting that “Smith admitted to committing similar crimes in the past, saying she makes the videos for the ‘same reason men go online to look at pornography,’ court documents show. Smith [said] she finds the videos sexually gratifying.”

It was the third such episode since Target had announced its policy, once for every subsequent month.

The Idaho incident prompted an entry on the rumor-investigating website Snopes, because the story was easily confused with a fake story that had been published on a comedy site just two months before, mocking concern over the possibility that unisex bathrooms might result in … exactly what happened in Idaho.

In the fake news story, a man who self-identified as a woman was captured photographing minor females in the bathroom. The only difference between the fake story and the real one was the location: In the real story, the snooping took place in the fitting room.

As Snopes was forced to admit in a post about the fake story, “This fake news article was later confused with a somewhat similar real-life incident that subsequently transpired at a Target store.” On the post about the real story, Snopes had to clarify, “Unlike a fake news report from April 2016 involving a woman supposedly arrested for taking pictures of underage girls in a Target bathroom, this report is real.”

But Target should not have needed these incidents to know that voyeurism is a real problem, because it was an issue even before the retailer broadcasted a policy that makes it easier for male predators to access women’s restrooms and fitting rooms.

Just one month before Target announced its policy, a 14-year-old girl noticed a man photographing her under the door as she changed clothes in a Target fitting room in Florida. She said that when she saw the camera, “I didn’t know what to do about it. So my body just locked up and I started shaking. … I don’t feel safe in a dressing room anymore.” Target knew that even its family restrooms were vulnerable; in 2015, a California man was caught hiding a camera in one.

Just a couple of weeks after Target’s announcement, a woman who was being verbally harassed in the swimsuit section of a Target in Florida videotaped herself chasing her harasser out of the store and into the parking lot. The man, it turned out, had a history of bothering women in public places and a previous conviction for photographing women in dressing rooms.

Under Target’s policy, men exactly like him can now walk right into the women’s restroom or fitting room, and any startled woman is the problem to be handled—not the offending man.

This is an excerpt from Ashley McGuire’s book “Sex Scandal: The Drive to Abolish Male and Female.”