How Local Citizens Can Take Up the Fight Against Public Corruption 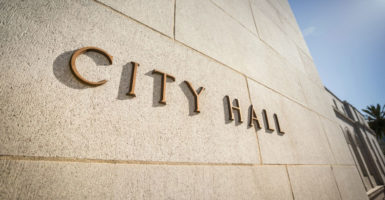 Brandon Muir is the executive director of Reclaim New York, a non-partisan, non-profit group dedicated to advancing a grassroots conversation about the future of New York.

We hear it all the time from politicians: They are finally going to stop the “waste, fraud, and abuse” in government.

In states with more corruption, like Pennsylvania, New York, or Illinois, calls to clean up government are frequent as well.

The problem is that these promises rarely come to fruition.

This week—Sunshine Week—is a perfect time to stop waiting for someone else to fix these problems. Let’s look to citizens, and a push for more open government, to get the job done. As the saying goes, sunlight is the best disinfectant of all.

New York might be the epitome of a state where corruption and abuse have run wild. Politicians here have long failed to live up to their promises to fix things.

The New York Legislature and governor have passed “ethics reforms” year after year of late, yet New York remains one of the most corrupt states in the nation. According to a University of Missouri study, New York has been home to the most corrupt officials in the U.S. over the past decade or so.

Waste and favor-trading is part of this culture of corruption, and it goes right down to the local level. On Long Island, one town official in Oyster Bay was convicted of tax fraud surrounding a scheme where he secretly guided taxpayer-backed contracts to a paving company, where he also worked.

These examples are just the tip of the iceberg.

That’s why Reclaim New York is engaging residents to fight the problem through the New York Transparency Project. This is a model that citizens across the country can benefit from.

The latest effort from this project is an innovative new citizen-driven online transparency platform, released this week to celebrate Sunshine Week.

It gives citizens the power to grade the performance of local governments and officials on 29 clear transparency practices. The extensive website covers 2,300 county, city, town, school district, and village governments.

As locals use the new site to rate how accessible governments are, elected officials who are interested in transparency will have a prime opportunity to step up and lead.

The process will also raise red flags when governments refuse to provide information. There’s something wrong when officials won’t show you how your money is being spent.

That’s something every American should know. We should all know when our government is meeting, what contracts it is signing, and how it is budgeting taxpayer dollars.

These are not revolutionary questions, but a citizen-driven effort to demand they are answered at every level of government definitely is.

The new online transparency platform is an important tool allowing citizens to demand proactive transparency. But, to reach that point, people must force government out of the shadows. That means using the law to make sure that public records are not hidden.

Reclaim New York was able to do this using New York’s Freedom of Information Law. The law does not just give citizens access to public records—it establishes timelines so that those citizens can obtain the records they seek in a timely manner.

But that has not stopped some towns and villages from dragging their feet.

When Reclaim New York filed records requests with over 500 local governments to show how every taxpayer dollar was being spent, scores of them pushed back—around 20 percent total.

But Reclaim New York filed—and won—lawsuits where necessary, and it has been successful in making this information public in its online database.

These cases also added to legal precedent that people should be reimbursed in cases of unreasonable denial, rather than be stuck paying thousands of dollars to see a public record.

Laws may be different throughout the country, but the principle is the same. Bad actors need to be shown that the days of hiding information from the public are over.

Additionally, where perhaps a local clerk is ignorant of the law, more education needs to be provided. To that end, Reclaim New York is conducting civic training sessions to help fix the capacity problem.

In the end, the solution for governments that have failed to provide records for any reason is the same: Be proactively transparent. Governments can’t run, and they can’t hide. With active and determined citizens, sunshine is the inevitable outcome.

That’s how we change the environment from one where government officials have too often failed to take their responsibility to taxpayers seriously, to one where proactive transparency is expected.

With access to better information, citizens can be the watchdogs we clearly need. People in states that have endured legacies of waste, favor-trading, and corruption should look to this approach.

No American should have to wonder if their hard-earned tax dollar is going to a road, or an insider’s slush fund. Sunshine Week is the perfect time to do something about it and restore ownership to citizens at every level of government.