Which Parts of the Obamacare Replacement Face Trouble in the Senate 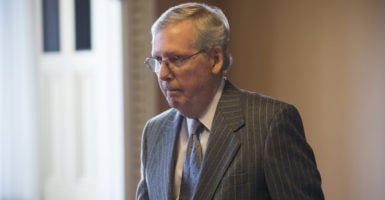 If the House GOP's Obamacare replacement plan arrives in the Senate in its current form, experts predict it could face challenges under the rules of reconciliation. Senate Majority Leader Mitch McConnell told reporters the bill could be amended once it gets to the upper chamber, though. (Photo: Jim Lo Scalzo/EPA/Newscom)

But some Republican senators and health policy experts say the bill in its current form already wouldn’t pass muster with the Senate’s parliamentarian, who decides whether provisions of legislation satisfy the rules of the process called budget reconciliation.

And, in a reversal, Ryan himself told reporters late Wednesday that he realizes changes need to be made to the legislation to clear the House, much less the Senate.

“Now that we have our score … we can make some necessary improvements and refinements to the bill,” Ryan said, according to The Washington Post, referring to the Congressional Budget Office’s report Monday on the costs and effects of the House GOP’s plan.

Reconciliation is the budget tool Republicans are using to fast-track their Obamacare replacement plan through the 100-member Senate, where it will need only 51 votes to pass instead of the 60 typically needed to end debate on legislation.

Democrats used reconciliation to make changes to Obamacare in 2010 and initially considered using the procedure to pass the original Obamacare bill in 2009. However, as then-Sen. Kent Conrad, D-N.D., said passing the Affordable Care Act that way would leave it looking like “Swiss cheese.”

That’s because strict rules govern the budget reconciliation process to ensure the tool is used only on bills that change taxes, spending, or the deficit.

Under the rules of reconciliation, senators have the power to raise a “point of order” against “extraneous matter” included in the bill if they believe it runs afoul of the Byrd rule.

First adopted in 1985 and named for then-Sen. Robert Byrd, D-W.Va., the Byrd rule outlines six definitions of what constitutes “extraneous matter.” For example, provisions may be considered extraneous if they recommend changes in Social Security, are outside the scope of the committee with jurisdiction, or do not change spending or revenues.

If a senator objects to part of a reconciliation bill, the Senate parliamentarian, currently Elizabeth MacDonough, decides whether it meets the requirements.

If the Senate parliamentarian agrees with the objection, the provision in question may be stricken from the bill, or it may be deemed fatal to the legislation.

Ryan had stressed that the House GOP’s Obamacare replacement plan satisfies all the requirements of reconciliation, and thus would pass muster with MacDonough. He argued that those who want to do more at this stage could doom the bill.

“This is the closest we’ll ever get to repealing and replacing Obamacare,” the speaker told reporters last week.

But other Republicans as well as  health policy experts, warn that as it stands, several provisions of the bill, called the American Health Care Act, could be challenged by Senate Democrats and raise concerns for the parliamentarian.

“This is a bad bill—one that will almost certainly be made worse once the Senate parliamentarian gives it the ‘Byrd Bath’ required for it to go through the Senate with just 51 votes,” Sen. Mike Lee, R-Utah, referencing the Byrd rule, wrote Tuesday in an op-ed for The Daily Signal.

Specifically, Lee said language included in the House bill regarding the Hyde Amendment may violate the rule.

The Hyde Amendment bars use of federal dollars to pay for most abortions. The House GOP’s bill would prevent the tax credits it creates from being used to fund insurance plans covering abortions.

Many conservatives and pro-life organizations were pleased to see the Hyde Amendment language included in the Obamacare replacement plan.

Some experts say a ruling by the Senate parliamentarian could lead to the provision being removed.

“A Byrd provision like abortion, where it’s incidental to the policy, [and] the provision is stricken,” Chris Jacobs, founder of Juniper Research Group and an expert in health policy, told The Daily Signal.

Jacobs previously worked in the House for Mike Pence when the vice president was an Indiana congressman, and was a health policy analyst for the Republican Policy Committee in the Senate when Obamacare was implemented.

In a piece for The Federalist, Jacobs noted that Republicans have attempted to include Hyde Amendment protections in reconciliation bills, but they ultimately have failed.

Lee also said he believes the “price controls” on premiums could be an issue for the parliamentarian. He was referring to a provision that allows health insurers to charge consumers a 30 percent surcharge if their insurance lapses for more than 63 days.

Perhaps the biggest issue for Republicans, according to Jacobs, is the system the bill implements to ensure only those who are eligible for tax credits receive them.

The House GOP’s Obamacare replacement plan implements a regime for verification of citizenship similar to that created in 2009 under the Affordable Care Act.

Verifying citizenship, though, requires the government to tap into databases run by the Department of Homeland Security’s Citizenship and Immigration Services.

And under the Byrd rule, a provision is considered “extraneous” if it falls outside the committee’s jurisdiction.

“It’s outside the scope,” Jacobs said.

The eligibility requirements also could run afoul of another “extraneous matter” definition: changes in Social Security.

The House GOP’s bill requires the government to use the infrastructure put in place by Obamacare to verify eligibility, which includes the use of Social Security numbers.

Senate sources told Jacobs that in 2015, while crafting a reconciliation bill to repeal Obamacare, Republicans attempted to give the secretary of the Department of Health and Human Services the authority to collect and use Social Security numbers to verify eligibility for the tax credits.

But the constraints of the reconciliation process prevented Republicans from doing so, and the framework established by Obamacare was left in place.

Democrats could object to the use of Social Security numbers to check eligibility under the Byrd rule.

“The incidental provisions are just stricken,” he said. “Provisions outside the scope are fatal.”

The final provision that could present challenges for Senate Republicans is the “firewall” the replacement plan enacts to ensure consumers with access to other insurance options—Tricare, coverage from Veterans Affairs, or employer-sponsored coverage, for example—cannot access the tax credits.

But because some options detailed fall outside of the Finance Committee’s jurisdiction, Jacobs said, the provision could “present procedural concerns.”

A Crucial Role for Pence

Sen. Ted Cruz, R-Texas, has devised a plan to circumvent the parliamentarian.

Last week, the conservative said Pence, who serves as president of the Senate, could overrule MacDonough because her role as parliamentarian is to advise.

“You don’t have to override the parliamentarian or get a new parliamentarian,” Cruz told reporters. “Under the statute, it is the vice president who rules. It is [Pence] who makes the decision.”

The Texas Republican said he has been discussing this option with colleagues.

Asking Pence to decide which provisions can be included in the reconciliation bill would enable Republicans to beef it up with measures popular with conservatives. Among them: allowing insurance to be sold across state lines.

Pence’s role also would enable Republicans to repeal others that conservatives want to see eliminated, such as Obamacare’s insurance regulations and mandates.

Though some Republicans worry that including certain provisions wouldn’t pass muster with the full Senate, conservatives argue that their leaders should at least try.

“I don’t understand why we wouldn’t try these things,” Sen. Tom Cotton, R-Ark., said Tuesday in an interview with radio host Hugh Hewitt. “If they’re going to be stricken under the arcane Senate rules, they can be stricken in the Senate.”

This report has been updated to include Ryan’s decision to allow amendments to the Obamacare replacement bill.