We Must Keep Our Promise to Fully Repeal Obamacare 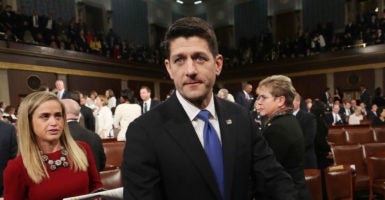 House Speaker Paul Ryan led the Republican effort to pass a full repeal of Obamacare in 2016 that was ultimately vetoed by President Barack Obama. (Photo: Pool/Reuters/Newscom)

“With this vote, we are keeping a promise and putting a bill that repeals Obamacare and defunds Planned Parenthood on the president’s desk,” Ryan continued.

“This budget reconciliation bill, which would reduce the federal deficit by a half trillion dollars, forces the president to confront the failures of Obamacare head-on. But most importantly, it clears the path to repealing this law with a Republican president in 2017 and replacing it with a truly patient-centered health care system. We will not back down from this fight to defend the sanctity of life and make quality health care coverage achievable for all Americans.”

It is now 2017, and we have a Republican president in the White House. A bill repealing Obamacare should have been sent to President Donald Trump’s desk weeks ago.

Unfortunately, the House of Representatives is now debating a bill that not only fails to repeal as much of Obamacare as it voted to do in 2015, but it also affirms much of Obamacare’s current structure, thus making any future efforts to replace the system that much more difficult.

The House leadership’s health care bill simply is not the Obamacare repeal bill we’ve been waiting for. It is a missed opportunity and a step in the wrong direction.

This is a bad bill—one that will almost certainly be made worse once the Senate parliamentarian gives it the “Byrd bath” required for it to go through the Senate with just 51 votes.

The simple reality is that Republicans do not have the 60 votes in the Senate they need to pass a bill that repeals all of Obamacare and replace it with a new conservative health care system designed from scratch.

But Republicans do have the 51 votes in the Senate needed to use the reconciliation process laid out in the Congressional Budget Act of 1974 to pass legislation that changes federal revenue or spending obligations.

But thanks to a rule created by former Sen. Robert Byrd, D-W.Va., changes to federal policy that are “merely incidental” to a bill’s budgetary components are not “privileged” and therefore are subject to a filibuster.

Hence the term “Byrd bath,” which in this case could be used to knock out key provisions of the House bill, including prohibitions on taxpayer funding of abortion and price controls on insurance premiums.

The good news is that we already have a bill that not only made it through the Byrd bath but was also voted for by every Republican: the 2015 repeal bill that Ryan praised in the quote above.

Now, the 2015 bill is not perfect. It might be improved during a Senate vote-a-rama when the Senate parliamentarian might be convinced that Obamacare’s insurance regulations do in fact have a big impact on federal spending (almost every economist agrees that Obamacare’s insurance regulations drive up the price of premiums, which are subsidized by federal revenues). But it might not.

Either way, there will be a lot more work to do on health care reform. Work that can’t be finished in the narrow window of time between now and when the Senate needs to spend floor time confirming Judge Neil Gorsuch to the Supreme Court in April.

So, let’s fulfill our promise to repeal Obamacare immediately and then take our time and make sure we get health care reform right. Let’s pass the 2015 repeal bill that Republicans in both houses of Congress voted for just 15 months ago.

Once Obamacare has been properly sent to the dustbin of history, then we can begin a deliberative, open, and honest process to reform our nation’s health care system.