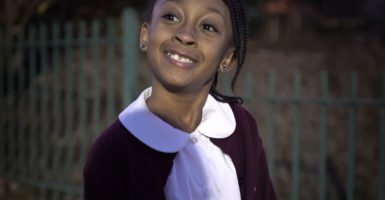 A House committee takes the first step toward renewing a program that allows children from low-income families, like 10-year-old Kariah, to leave failing public schools for a private school of their choice. (Photo: The Daily Signal)

A House committee voted Friday to continue a school voucher program for poor children in the District of Columbia, signaling Republicans’ intent to follow through on President Donald Trump’s promise to expand school choice throughout the country.

The program, known as the D.C. Opportunity Scholarship Program, provides federally funded scholarships to low-income families in the nation’s capital. The scholarships enable them to take their children out of a failing public school and send them to a private school of their choice.

The scholarship program currently serves more than 1,200 students each year, but would be able to expand under the legislation before Congress.

“Public schools in D.C. have struggled for decades, with some of the worst academic outcomes in the nation,” Lindsey Burke, an education policy expert at The Heritage Foundation, said. “While there have been some improvements recently, kids in the scholarship program have gotten an immediate exit pass to better options that fit their unique learning needs.”

“This is a great first step to securing a program that had been under constant threat of defunding under the Obama administration. The D.C. Opportunity Scholarship Program has been a lifeline for poor children living in the nation’s capital,” Burke said.

The House Oversight and Government Reform Committee, in a voice vote Friday morning, advanced the bill to the full House, despite continuing opposition from many Democrats.

Three attempts to amend the bill by committee Democrats failed by votes along party lines.

During the Obama administration, the D.C. Opportunity Scholarship Program faced an uncertain future because it was opposed by teachers’ unions, which pressured Democrats. On multiple occasions, the administration attempted to defund it.

Among those against the program’s renewal are the National Education Association, the largest teachers’ union in the country, and a majority of the D.C. Council. Mayor Muriel Bowser, a Democrat, supports the voucher program, however.

Eight of the 13 D.C. Council members sent a letter Tuesday to Rep. Jason Chaffetz, R-Utah, chairman of the oversight committee, expressing “staunch opposition” to any expansion of the scholarship program, and asking Congress to phase it out completely.

“The voucher program should be phased out because participation in the program and similar initiatives has not only failed to improve students’ academic performance, but worsened it, as found in a series of recent studies,” the city lawmakers wrote.

A 2010 evaluation by the U.S. Department of Education found “no conclusive evidence” that the D.C. school voucher program affected student achievement. However, that same report found that the program “significantly improved students’ chances of graduating from high school.”

According to that evaluation, 91 percent of students participating in the program graduated high school, versus 70 percent of students in the control group, which represented parents of children who applied for a scholarship but weren’t awarded one.

Many low-income students served by the program live in Anacostia, a neighborhood of Southeast Washington where 64 percent of children are raised in poverty. Last year, the local high school graduated only 42 percent of its students.

In December, The Daily Signal interviewed Anacostia resident Shakira Butler, a single mother whose daughter Kariah, 10, is a scholarship recipient. Because of the voucher program, Butler said, she is able to afford tuition at St. Francis Xavier Academy, a Catholic school in the area.

“For those who are naysayers of the program,” Butler said, “put yourself in our shoes.”

Despite the latest objection from the D.C. Council, made up of Democrats except for two independents, Bowser reaffirmed her support for the program Tuesday, The Washington Post reported.

“It’s a delicate balance in the District that I think is a model for choice across the nation,” the mayor said.

The D.C. Opportunity Scholarship Program achieved increased graduation rates among scholarship recipients by spending less than half what is spent annually per child in the D.C. public school system—$12,600 compared to $29,400.

The program is the nation’s only federally funded school voucher initiative. State programs exist in Florida, Indiana, Louisiana, and Ohio.

According to the American Federation for Children, nearly 6,600 children from low-income families have been awarded scholarships since the D.C. Opportunity Scholarship Program began 12 years ago, and more than 19,800 have applied.

In addition to providing scholarships for low-income students, the program’s reauthorization includes additional funding for D.C. public and charter schools.