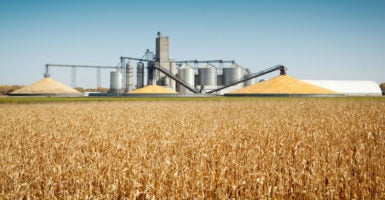 The 2002 farm bill was the first to contain an energy title, which has since grown to include direct handouts and loan guarantees for advanced biofuels and biorefineries, renewable chemicals, and bio-based product manufacturers.

The 2014 farm bill should be the last to contain such an energy title.

Government programs to advance the use of biofuels only perpetuate mediocrity. They allow uncompetitive sources of energy to stay afloat and reduce the incentives to innovate and compete without the subsidies.

If advanced biofuels and other alternative sources of energy are truly profitable, they shouldn’t need help from the taxpayer. The United States has a robust, diverse energy market that can supply consumers with affordable and reliable energy.

Proponents of the energy title in the current farm bill promote its provisions as a way to support economic growth in rural communities.

Instead of supporting rural communities, however, the federal government is actually supporting the politically well-connected at the expense of those on the outside. There are far more rural economic losers than winners as a result of the farm bill.

Promoting specific energy sources is not the role of the federal government, much less the farm bill. If biofuels manage to succeed as a competitive source of transportation fuel, it will not be as a result of any taxpayer-funded handout.

Whether the industry flourishes or fails is for private actors, using their own resources, to determine. This holds true not just for biofuels, but for all energy resources and technologies.

In fact, the 2014 farm bill provides $5 million to educate the public and local and state governments on the use of biodiesel. Perhaps some of that money should be used to address the food-for-fuel problem presented by biodiesel generated from soybeans.

Just as the corn-ethanol mandate part of the Renewable Fuel Standard has drawn land away from competing crops and increased prices for livestock producers, more of America’s soybean crop now goes toward biodiesel production. In 2014, 23 percent of the total domestic soybean production went to biodiesel production, up from less than 1 percent in 2000.

>>>See The Heritage Foundation’s alternative to the farm bill, “Farms and Free Enterprise: A Blueprint for Agricultural Policy”

Another wasteful energy program in the farm bill is the Rural Energy for America Program, which “provides guaranteed loan financing and grant funding to agricultural producers and rural small businesses for renewable energy systems or to make energy efficiency improvements.”

Funds from this program can be used to obtain more efficient windows, refrigerators, lighting, insulation, as well as heating, ventilation, and air conditioning, among other equipment.

This program is completely misguided. If a small business finds that it can save money on energy bills by installing more energy-efficient windows, it shouldn’t need public finance. Individuals and businesses make energy-efficient investments with their own money on a regular basis because lower energy bills justify the expense.

For years, government favoritism toward biofuels and bioenergy has promised much, but delivered very little. While a select few benefit from the special treatment, bioenergy policies have come at significant cost to taxpayers, energy consumers, the environment, the world’s hungriest citizens, and the large segment of the agricultural community that does not profit from the subsidies.

The next farm bill should look very different from its predecessors. Last fall, The Heritage Foundation introduced an alternative plan that better reflects modern-day farming and would free agricultural producers from excessive federal government intervention.

One area where Congress can start is by scrapping the entire energy title of the next farm bill.