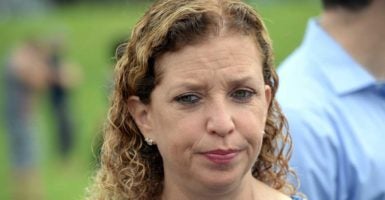 Three brothers who provided computer services to Rep. Debbie Wasserman Schultz, D-Fla., among others, are being investigated for improprieties that include financial ties to Middle East terrorism. (Photo: Solar/ACE Pictures/Newscom)

Congressional staffers are accused of holding their stepmother in “captivity” with violent threats in a plan to use her to access money stashed away in the Middle East. The staffers are suspected of using their positions to enrich themselves.

Days before U.S. Capitol Police told House members that three Pakistani brothers who ran their computer networks may have stolen congressional data, their stepmother called police in Fairfax County, Virginia, to say the Democratic staffers were keeping her from her husband’s deathbed.

Fairfax County is just outside Washington. A relative described the woman’s life as being completely controlled by the brothers for months while they schemed to take their father’s life insurance.

Authorities said the brothers–who as IT professionals for Congress could read House members’ emails– used wiretapping devices on their own stepmother and threatened to abduct loved ones in Pakistan if she didn’t give them access to money stowed away in that country.

On Feb. 2, House officials banned Imran, Abid, and Jamal Awan from the House network as part of a Capitol Police criminal investigation into the House’s computer security.

But longtime employers, including Democratic Reps. Debbie Wasserman Schultz of Florida and Gregory Meeks of New York, have stood by them.

Meeks said although the brothers had access to his data, he’d “seen no evidence that they were doing anything that was nefarious” like steal or hack, and were being unfairly picked on for being Muslim.

But a Fairfax police report obtained by the Daily Caller News Foundation Investigative Group says that separately from that investigation, on Thursday, Jan.5, at 2 p.m.,  the stepmother, Samani Galani,  called police “after her stepchildren were denying her access to her husband of eight years, Muhammad Shah, who is currently hospitalized.”

Police said they responded to the Springfield, Virginia, home Galani shared with Shah.

“I made contact with her stepson, Abid, who responded to location and was obviously upset with the situation. He stated he has full power of attorney over his father and produced an unsigned, undated document as proof,” officers wrote. “He refused to disclose his father’s location.”

The father died days later, with his children denying him a final moment with Galani. His body was taken to Pakistan, where the family has significant assets.

Galani was shocked to learn that his death certificate listed him as divorced, according to a relative of Galani’s. The relative spoke only on condition of anonymity.

“They kept their stepmother in sort of illegal captivity from Oct. 16, 2016, to Feb. 2,” the relative said, telling Galani they were in charge of her life and she was not allowed to speak to anyone.

The fact that she did not speak English made it easy for them to take advantage of her, the relative said.

When Shah was hospitalized, “they would not let the father communicate with the wife, they would say he’d be meeting her when they said so.”

The brothers bugged Galani’s house with hidden listening devices and told her “her movements were under constant surveillance and conversations within the house and over the telephone were being listened to,” the relative said. “They would repeat what she had told people to prove that they were really listening.”

“This happened in the United States of America, can you believe it?”

Galani obtained a secret cell phone and stood in the yard to communicate with relatives, who encouraged her to call  police, the relative said.

After she did, Abid “threatened her very severely, made her fearful,” the relative said, and the brothers “told her they are going to abduct or kidnap her family back in Pakistan, and she had to apologize.”

Imran then tried “to manipulate her,” the relative said.

“She said to him ‘If you say you are my son then why are you keeping my phone conversations listened to?’ So he said he would remove the devices. He came into the house and she saw him remove a couple,” including under the kitchen counter.

But as soon as Shah died, the stepmother’s relative said, the brothers came into the house and “whatever documents were there they stole, a couple laptops which were their father’s property, and [they] left for Pakistan.”

Then Imran called and demanded that Galani give him power of attorney–this time a Pakistani version–for assets in his father’s name there, instructing Jamal to take her to the Pakistani embassy in Washington, the relative said.

“He sent a couple of people to pressure her.”

Galani learned from a life insurance executive that “a few days before the father’s death, the beneficiary was changed and Abid became the beneficiary,” the relative said.

On top of that, the Springfield house where she lived would go to Abid.

Galani fled from the brothers and has filed a second police complaint with Fairfax County over insurance fraud and other abuses.

Abid did not return a request for comment from The Daily Caller News Foundation.

Galani’s relative came forward because members of Congress have attempted to downplay the brothers’ potential crimes, and limited the investigation to the Capitol Police, who lack the ability to investigate cyber breaches and international crimes and despite naming the brothers as suspects, have not even arrested them.

“I am fighting to protect the country,” the relative said. “These are very bad people.”

Politico reported that Imran and his wife, Hina Alvi, are personal friends with Wasserman Schultz, who presided over the Democratic National Committee when it was subject to an email hack that she angrily blamed on Russians.

Wasserman Schultz has not fired Imran, although he is banned from the House network, and circumvented the ban by having him serve as an “adviser.”

Imran began working for the Florida Democrat in 2005 and soon after, his two brothers and two of their wives all appeared on the congressional payroll, collecting more than $4 million from Congress.

The brothers had numerous additional sources of income, all of which seemed to disappear. While they were supposedly working for the House, the brothers were running a car dealership full time that didn’t pay its vendors.

While the brothers were working for House members, including members of the Homeland Security and Foreign Affairs committees, the car dealership took but did not repay a $100,000 loan from Ali Al-Attar,  a fugitive from U.S. authorities who has been linked to Hezbollah.