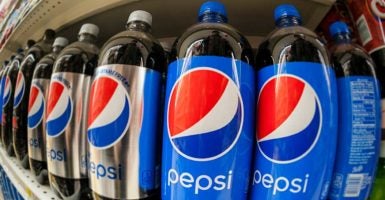 A beverage tax enacted in Philadelphia puts a strain on some businesses, including Pepsi. (Photo: Richard B. Levine/Newscom)

Pepsi announced last week that it will lay off around 100 employees at distribution plants that supply the Philadelphia area. This is the latest blow for the city’s new beverage tax, which went into effect in January.

“Unfortunately, after careful consideration of the economic realities created by the recently enacted beverage tax, we have been forced to give notice that we intend to eliminate 80 to 100 positions, including frontline and supervisory roles,” Pepsi spokesman Dave DeCecco said, according to Philly.com.

However, the layoffs could be quickly reversed if the beverage tax is abandoned, according to DeCecco.

“If the tax is struck down or repealed, we plan to bring people back to work,” DeCecco said, according to Reuters.

The tax is currently under appeal in the Commonwealth Court, with arguments anticipated to begin in early April.

Although it is commonly known as the “soda tax,” the law also includes all “non-100 percent-fruit drinks; sports drinks; sweetened water; energy drinks; pre-sweetened coffee or tea; and nonalcoholic beverages intended to be mixed into an alcoholic drink,” according to the city of Philadelphia’s website.

The tax was implemented to finance pre-kindergarten programs, increase funding to public parks and facilities, and improve the health of Philadelphians, according to a statement published online by Mayor James Kenney’s office.

Since the law was enacted, some local consumers and businesses say they have suffered.

According to Bloomberg, the CEO of Brown’s Super Stores, Jeff Brown, said, “In 30 years of business, there’s never been a circumstance in which we’ve ever had a sales decline of any significant amount, I would describe the impact as nothing less than devastating.”

The Commonwealth Foundation, a free-market think tank based in Pennsylvania, condemned the soda tax in an article published on its website last month, saying, “Philadelphia’s mistake should serve as [a] stinging reminder that tax hikes—no matter how seemingly inconsequential or justifiable—can hurt many of the people who can least afford to pay.”

The Commonwealth Foundation said the tax is “putting people out of work and raising the cost of groceries.”

Daren Bakst, a research fellow in agricultural policy at The Heritage Foundation, echoed these sentiments.

“The Philadelphia City Council decided it knew what its city residents should eat and drink. Freedom was apparently not important to them,” Bakst told The Daily Signal in an email. “They didn’t care that it would undermine freedom. They didn’t care that it would hurt small businesses in their city. Nor did they care that a tax like this is regressive, hurting the poor the most because a greater share of the poor’s income goes to food purchases.

“The Philadelphia City Council deserves all the blame that is coming their way. For those unfortunate individuals who are losing their jobs, they can thank this to the arrogance of people who think they should socially engineer diets,” Bakst said.