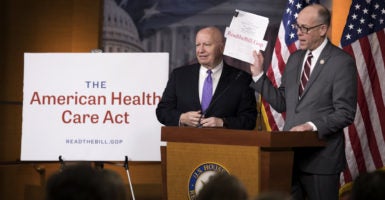 After seven years of promises to repeal and replace Obamacare, House Republicans finally have a bill detailing how they plan to reform the health care system once the Affordable Care Act is dismantled.

The House Ways and Means and Energy and Commerce committees revealed their replacement plan, the American Health Care Act, on Monday evening. The bill repeals key provisions of Obamacare, but also implements parts of a replacement.

The 123-page bill is the culmination of weeks of discussions and negotiations—and years of calls for Obamacare to be repealed and replaced—from House Republicans on the relevant committees who worked through the weekend putting the final touches on the legislation.

The Congressional Budget Office has yet to release cost and coverage estimates for the replacement proposal.

Republicans are using a budget tool called reconciliation to fast-track the replacement plan through the Senate, where it needs 51 votes to pass.

GOP leaders in both chambers have a tough sell—so far, the replacement hasn’t been well received from Congress’ right flank, who have called on their leaders to bring a bill from 2015 unwinding the health care law before members for a vote.

In a memo to its members, policy staff for the Republican Study Committee detailed their concerns with the legislation, which included the Medicaid expansion and tax credits.

Additionally, members of the conservative House Freedom Caucus raised concerns about the replacement plan and said changes will need to be made to the legislation before it earns their support.

“We really need to look at some amendments to make sure we get rid of the taxes,” Freedom Caucus Chairman Mark Meadows, R-N.C., told Fox News on Monday night. “We put something on President [Barack] Obama’s desk just a few months ago, and to suggest that what we put on President [Donald] Trump’s desk sets a new entitlement, keeps some taxes, doesn’t repeal all of Obamacare, we’ve got to do better.”

Republican leaders in the House and Senate have slim margins for success in getting the replacement plan across the finish line.

In the House, Republicans control 237 seats and cannot lose more than 19 votes.

In the Senate, they control 52 seats and cannot lose more than two votes.

Here is the rundown of the American Health Care Act:

What the Bill Repeals

-The penalties for the individual and employer mandates.

-The “Cadillac Tax” on expensive employer-sponsored plans until 2025.

-All of Obamacare’s taxes, effective after 2017.

-Payments to insurers for cost-sharing reductions by 2020.

What the Bill Replaces

-Protections for consumers with pre-existing conditions.

-Age ratio of 5-to-1 for how much more insurers can charge elderly customers versus younger customers.

-Per-capita caps for Medicaid, which depend on each state’s number of enrollees, beginning in 2020.

What the Bill Leaves in Place