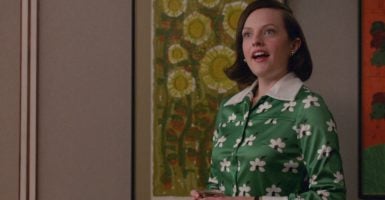 The way to help women continue to move forward isn’t to propagate the myth that women in the United States are victims, oppressed by the system and unable to help themselves secure a better future.

Yet that’s exactly the message of the “A Day Without a Woman” strike happening Wednesday.

Various organizers, including the Women’s March crowd and other feminists, are pushing women to “take the day off, from paid and unpaid labor,” as well as by not shopping (except at “small, women- and minority-owned businesses”) and by wearing red.

An op-ed advocating the strike published in The Guardian last month by eight women (including a convicted terrorist, but hey, let’s not get hung up on details) explicitly makes the case that many women cannot improve their conditions:

Lean-in feminism and other variants of corporate feminism have failed the overwhelming majority of us, who do not have access to individual self-promotion and advancement and whose conditions of life can be improved only through policies that defend social reproduction, secure reproductive justice and guarantee labor rights. As we see it, the new wave of women’s mobilization must address all these concerns in a frontal way. It must be a feminism for the 99 percent.

Here are some facts that belie the notion that women in the United States are facing some kind of rampant systemic injustice:

And that often-cited pay gap? As my colleague Romina Boccia has noted, much of the pay gap between men and women can be attributed to factors such as the fields women choose to work in, and the time off work that women choose to take.

“When accounting for relevant factors that affect pay, such as education, choice of industry and occupation, hours worked, experience, and career interruptions, the difference between average male and female wages shrinks to about 5 to 7 cents on the dollar,” Boccia, who focuses on fiscal and economic issues in her work at The Heritage Foundation, wrote.

Now, don’t get me wrong: There’s room for more progress. It would be good to eliminate the pay gap entirely, even if it’s significantly less than the left often acts like it is.

And while I don’t think there needs to be 50-50 representation in business leadership roles and elected positions, it would be nice to have more women in those positions than we currently do. (Although it’s telling that often feminists on the left seem to drift toward accepting a man’s view of success—i.e. high leadership positions—instead of questioning whether a successful, fulfilling life for some women might look different.)

And while I’ll acknowledge that Sheryl Sandberg, the Facebook executive and author of “Lean In,” certainly has had more opportunities than many women, it’s absurd to say 99 percent of women are powerless to change their fates. Women in a variety of careers and seniority statuses have the ability to ask for higher pay, switch jobs, acquire more education to be better positioned for jobs, and make a host of other decisions that could affect their lives positively.

In fact, one of the things most interesting about the Hired.com survey was that young women are actually asking for more compensation—and clearly, they’re getting results.

But here’s what won’t help: a strike that affects all companies—whether they are helpful toward women or not. In fact, given that over 7 out of 10 women think their workplaces treat them fairly, it stands to reason that most workplaces haven’t done anything to merit this strike.

And let’s not forget how this strike against the patriarchy is going to affect women: Already some school districts across the country are planning to be closed Wednesday, leaving moms (and yes, dads) who work facing a child care headache. That’s hardly the way to boost working women.

If women are serious about changing workplace attitudes, there are plenty of ways to do so. Applauding companies who offer paid family leave and encouraging consumers to support them can help promote a culture where workplaces are more family-friendly. (Think public opinion doesn’t matter? Consider the fact that Netflix, after being criticized for offering extensive paid family leave to salaried employees but not hourly workers, changed its policy.)

A group called Parenting in the Workplace Institute, founded by mom Carla Moquin, tracks companies that allow parents to bring babies to work and advises companies on the best related practices.

We’re not in the “Mad Men” era anymore, and it’s time to stop pretending we are. Instead of throwing a temper tantrum, er, striking, women who want to change the status quo further likely would be more effective—not to mention more considerate of women and men who need services like schools during the week—by focusing on specific problems at specific companies. Such women also could encourage other women to become their own best advocates.