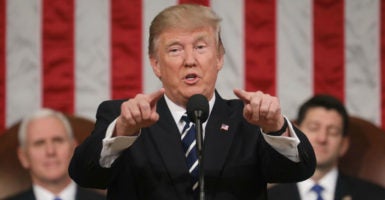 A key conservative lawmaker is urging Republicans to make good on their promises to repeal Obamacare before they get distracted by other legislative issues.

A senior Republican congressional aide told The Daily Signal in an email to expect the text of a “consensus” bill to repeal and replace Obamacare “early this week.” By Monday evening, House Speaker Paul Ryan and his leadership team had posted the language of the bill and talking points online, referring to action made possible by “unified Republican government” under President Donald Trump:

Asked whether he was concerned that repeal of  Obamacare might be sidetracked to address upcoming legislative matters such as the debt limit, Jordan told The Daily Signal: “I hope not.”

But Jordan said he is calling for passage of a repeal bill along with “a separate piece of legislation, done at the same time which replaces Obamacare with patient-centered, market-centered, family-centered health care.”

He made a similar point last week on “Fox & Friends”:

"Replace Obamacare with a patient-centered…plan. Not what we have currently, which is Washington in control." –@Jim_Jordan pic.twitter.com/vpKGbBcpFW

Trump has pledged to sign legislation to repeal and replace Obamacare as soon as possible, and increasingly has shown a preference for one bill that does both. Office of Management and Budget Director Mick Mulvaney said as much in an interview earlier Monday with radio host Hugh Hewitt.

For procedural reasons amid Democrats’ opposition to undoing Obamacare, however, conservatives such as Jordan see a danger in trying to do both in one bill.

Jordan said Obamacare repeal is a “top priority for the American people,” and he will vote for nothing less than the 2015 repeal bill that was passed by both chambers and vetoed in January 2016 by President Barack Obama.

Other pressing matters that could distract from the Obamacare debate include the debt limit deadline March 16, Judiciary Committee hearings for Supreme Court nominee Neil Gorsuch, which commence March 20, and the expiration date for the current continuing resolution funding the government, April 28.

On March 16, the ability of the U.S. Treasury “to borrow on the credit of the U.S. government” will expire and Congress either must balance the budget or raise the debt limit.

Congress ought to repeal Obamacare before it turns to other items such as the debt limit, argues Thomas Binion, director of policy outreach at The Heritage Foundation.

“I believe they must address [Obamacare] before moving on to other items for several reasons,” Binion said in an email to The Daily Signal before House Republicans released their plan. “The first is that they have to pass appropriations to fund the government by April 28 when the current [continuing resolution] expires. If Obamacare is still the law of the land at that time, Congress will face the impossible choice of whether or not to fund Obamacare.”

In 2013, Republican lawmakers’ refusal to fund Obamacare resulted in a 16-day partial shutdown of the government, Binion noted, and a similar funding battle could occur if lawmakers don’t address Obamacare before April 28.

With Ryan and other House GOP leaders releasing the text of an Obamacare repeal and replace bill Monday evening, Congress may be able to get ahead of the game.

There was a large staff meeting at the White House Friday led by OMB Director Mulvaney to identify and resolve the few outstanding issues. The health care committees in Congress worked over the weekend with the White House to tie up loose ends and incorporate technical guidance from the administration.

On Saturday, the aide said, Ryan had a conference call that included Mulvaney, House Energy and Commerce Chairman Greg Walden, Health and Human Services Secretary Tom Price, and Andrew Bremberg, an assistant to Trump who directs the Domestic Policy Council.

House and Senate staff worked through Saturday to address unresolved issues. “We are in a very good place right now, and while drafting continues, we anticipate the release of final bill text early this week,” the aide said earlier Monday.

In the House, the Energy and Commerce and Ways and Means committees were tentatively scheduled to vote on the repeal bill this week, followed by a full House vote later this month, The New York Times reported.

AshLee Strong, national press secretary for Ryan, told The Daily Signal that Congress was on the cusp of Obamacare repeal.

“We are now at the culmination of a yearslong process to keep our promise to the American people,” Strong said in an email.

Dan Holler, spokesman for Heritage Action for America, the lobbying affiliate of The Heritage Foundation, told The Daily Signal in an email  that despite the slowed progress of Obamacare repeal, it remains the highest priority for conservatives.

“President Trump and congressional leaders understand Obamacare repeal is the first major agenda item, and they have said so publicly,” Holler said before Republican leaders released their plan Monday evening. “Even though the repeal effort slowed dramatically over the last month, the expectation remains that Obamacare can and will be repealed.”

Ken McIntyre contributed to this report, which has been updated  to reflect release of the text of the bill to repeal and replace Obamacare.