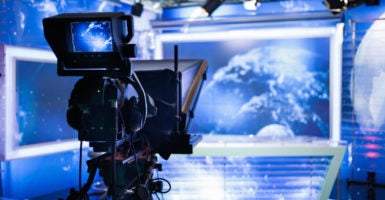 Russian propaganda and influence operations have escalated over the past decade, and have especially intensified after the invasion of Ukraine.

Plain and simple, the Kremlin has declared war on the concept of objective news reporting—on the airwaves as well as on the internet.

Years in the making and with a modest budget of $10 million, the U.S. government has finally produced its own response: a 24/7 news network called Current Time. It is aimed at giving native Russian speakers facts and news in their own language and at challenging the false narratives embedded in much official Russian news and entertainment.

Current Time had its official launch in February. In a world of fierce competition from Russia, China, Iran, and others for the information space, the U.S. government is finally entering the fray in the ambitious and focused way that the current international climate demands.

Distribution agreements have been reached so far in countries from the Baltics to Central Asia, and also in both Eastern and Western Europe. The Broadcasting Board of Governors advertises a potential audience of 275 million viewers for Current Time via satellite and cable.

Only digital distribution is possible inside Russia as the Kremlin years ago kicked U.S. broadcasts off the Russian airwaves.

But the competition from Russian state media is tough. Of course, sophisticated viewers already know that Russian media are not providing the whole story, but many simply tune into Russian TV for its sports, game shows, and dramas, which are slick and well-produced.

Interspersed is new analysis with a distinct slant. It is a highly competitive market we are entering.

With the motto “Real News for Real People, in Real Time,” Current Time focuses on live news. Russian audiences are used to highly orchestrated news and are attracted to more immediate, unedited content.

The network features a daily one-hour show from Washington. Other programming includes a popular program that explores the “Hidden Russia,” parts of the country that even most Russians do not know about. Another program tackles “fake news” by pitting footage vs. footage, exposing hoaxes and disinformation.

Viewed from the perspective of U.S. international broadcasting, Current Time shows what is achievable when the component parts of the Broadcasting Board of Governors work together instead of against each other, which they have an unfortunate tendency to do when internal turf battles erupt for scarce resources.

The network is the product of collaboration between Voice of America and Radio Liberty/Radio Free Europe. It fulfills the mandate of both by broadcasting news about the United States and from inside Russia as well.

As the Trump administration faces decisions about the Broadcasting Board of Governors’ management and mission, it is worth noting the potential for cost-effective, targeted programming to populations of strategic foreign policy importance. Russian speakers are certainly that.

Broadcasting remains one of the U.S. government’s most potentially powerful tools, as it has been since the Cold War. The Trump administration must give it thoughtful and proper attention in the months ahead.