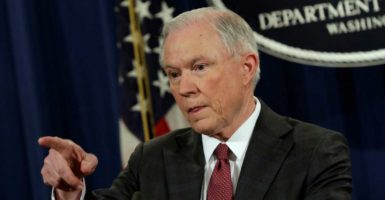 Attorney General Jeff Sessions held a press conference Thursday to announce he was recusing himself from any matters that deal with the 2016 presidential election. (Photo: Yuri Gripas/Reuters/Newscom)

Attorney General Jeff Sessions announced Thursday he would recuse himself from any Justice Department investigation that relates to the 2016 presidential campaign.

“He should only recuse himself from the investigation of illegal leaks,” @TomFitton says.

“My staff recommended recusal. They said since I had involvement in this campaign, I should not be involved in any campaign investigation,” Sessions said at a press conference Thursday.

“I have studied the rules and considered the comments and evaluations,” Sessions said. “I believe those recommendations are right and just. Therefore, I have recused myself in the matters that deal with the [Donald] Trump campaign.”

Sessions said he did not meet with Russian operatives about the election.

Some government ethics experts contend the recusal wasn’t necessary—at least not from a probe of alleged Russian interference in the 2016 presidential election.

He should only recuse himself from an illegal leak investigation that he was a victim of, said Tom Fitton, president of Judicial Watch, a conservative government watchdog group.

“He should only recuse himself from the investigation of illegal leaks because it relates to him, he was a victim,” Fitton told The Daily Signal.

Obama gang out of control wiretapping and “investigating” its political enemies in Trump world. https://t.co/zgoRud6fhY

Fitton said a member of the Senate Armed Forces Committee meeting with a Russian ambassador seems rather routine. He said this is why he thinks it’s puzzling that even some Republican lawmakers are calling for Sessions to recuse himself in regard to investigating the alleged Russian hacking of the Democratic National Committee communications.

“The real Russian scandal is that President Barack Obama’s team used the pretext of Russian interference in the election to justify wiretaps and illegal leaks of the Trump team, including a U.S. senator, now attorney general,” Fitton added. “The Russians’ interference in the elections is chasing unicorns, with these smoky allegations of collusion between the campaign and the Russian operatives, without evidence.”

The conversations between the then-Alabama senator and the Russian ambassador cast doubt about Sessions’ testimony during the Senate Judiciary confirmation hearings, when he said he didn’t talk to Russians as a Trump campaign surrogate. The FBI, CIA, National Security Agency, and the Treasury Department are reportedly involved in the investigation.

Sessions said he would send a written explanation of his testimony to the Senate Judiciary Committee.

During the press conference, Sessions said he was “taken aback” by the question at the Senate hearing about campaign surrogate discussions with Russians.

“In retrospect, I should have slowed down and said I did meet with one Russian official a couple of times,” Sessions said.

Sessions said the conversation with the official became testy, and that he turned down a lunch invitation. Sessions noted they disagreed on the issue of Ukraine.

Senate Minority Leader Charles Schumer, D-N.Y., House Minority Leader Nancy Pelosi, D-Calif., and other Democrats have called for Sessions to resign from office for what he told the committee.

Republican lawmakers such as Rep. Jason Chaffetz, R-Utah, the chairman of the House Committee on Oversight and Government Reform, as well as GOP Sens. Susan Collins of Maine and Rob Portman of Ohio called for Sessions to recuse himself from the Russian investigation.

Fitton, of Judicial Watch, said Sessions would clearly have to recuse himself in a potential perjury investigation, but based on the questions and answers in the Judiciary hearing, it’s unlikely he could face a credible allegation.

Concurring with Fitton, it seems likely that Obama holdovers might be pushing these leaks to undermine the current administration, said Hans von Spakovsky, a former Justice Department attorney in the George W. Bush administration, now a senior legal fellow at The Heritage Foundation.

“As president, Obama was 100 percent political during his administration and hasn’t stopped,” von Spakovsky told The Daily Signal. “The Sessions meetings are much ado about nothing if you look at the questions and answer from the hearing.”

During the confirmation hearing, Sen. Al Franken, D-Minn., asked Sessions: “If there is any evidence that anyone affiliated with the Trump campaign communicated with the Russian government in the course of this campaign, what will you do?”

Sessions responded, “I’m not aware of any of those activities. I have been called a surrogate at a time or two in that campaign and I didn’t have—did not have communications with the Russians, and I’m unable to comment on it.”

Separately, Sen. Patrick Leahy, D-Vt., asked Sessions in a questionnaire: “Several of the president-elect’s nominees or senior advisers have Russian ties. Have you been in contact with anyone connected to any part of the Russian government about the 2016 election, either before or after Election Day?”

Sessions talked to Kislyak once in his office, in a meeting that Sessions spokesman Sarah Flores told The Wall Street Journal was about diplomatic matters. Sessions also spoke to Kislyak at a Heritage Foundation event held in Cleveland during the Republican National Convention, where Sessions was the keynote speaker at luncheon that was part of the forum.

A statement from The Heritage Foundation explained that in coordination with the State Department and other groups, it held a forum titled “Global Partners in Diplomacy” in Cleveland in July 2016, which was an educational program for ambassadors invited by the State Department to observe the Republican National Convention.

Topics at the conference included various regional issues, national security and trade, among numerous others, with State Department officials present at all program events. About 100 individuals attended the luncheon event where Sessions spoke, according to The Heritage Foundation.

The State Department handled coordination for ambassadors and did not provide The Heritage Foundation with a list of ambassadors that attended.

Flores told The Wall Street Journal that Sessions, as a member of the Senate Armed Forces Committee, had more than 25 conversations with ambassadors last year, including those from Britain, South Korea, Japan, Poland, India, China, Canada, Australia, and Russia.

During his tour of the U.S.S. Gerald R. Ford aircraft carrier on Thursday, reporters asked President Donald Trump if he still had confidence in Sessions, he answered, “Total.”

When asked if Sessions should recuse himself, Trump responded, “I don’t think so.”

Trump also said that he wasn’t aware of Sessions speaking with a Russian ambassador, and when asked if Sessions testified truthfully to the Senate, Sessions said, “I think he probably did.”